I would like to identify the largest possible contiguous subsample of a large data set. My data set consists of roughly 15,000 financial time series of up to 360 periods in length. I have imported the data into MATLAB as a 360 by 15,000 numerical matrix. 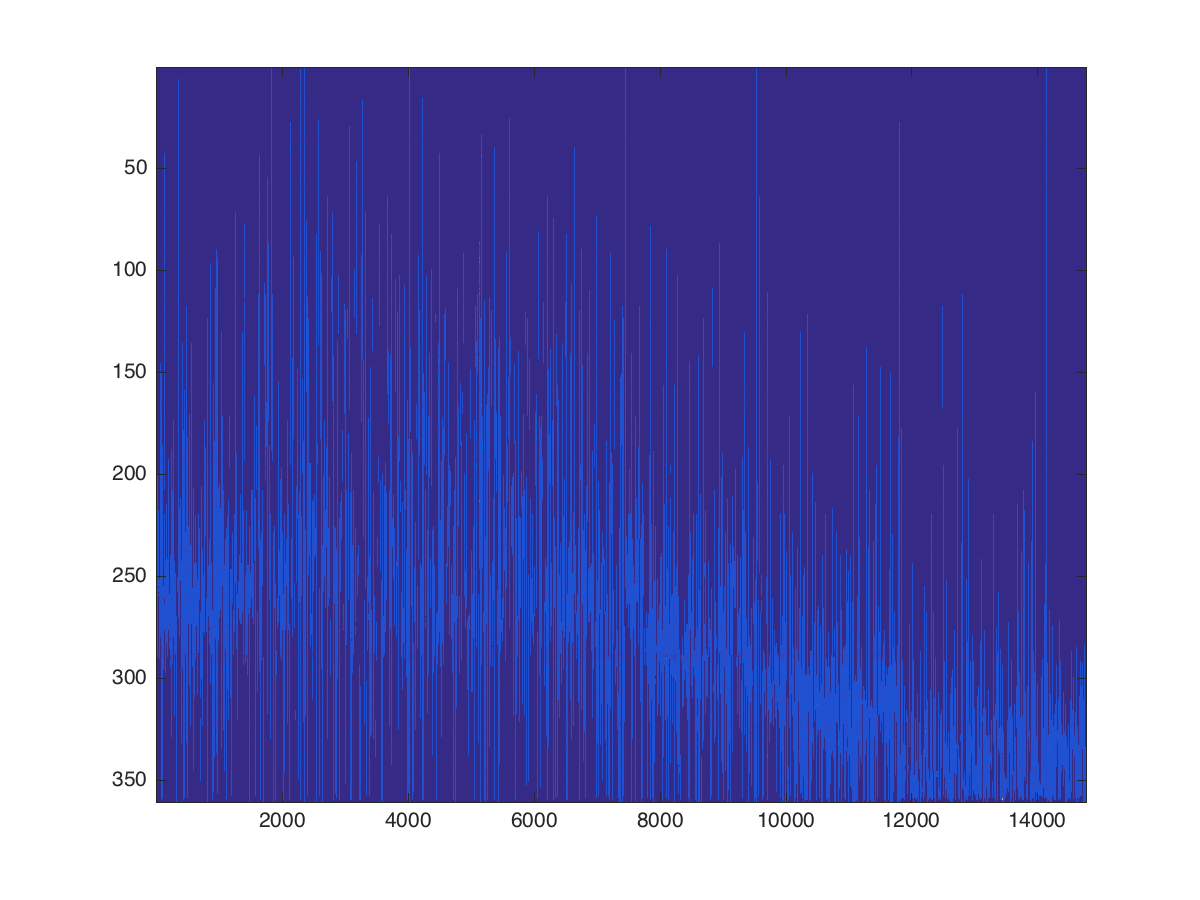 This matrix contains a lot of NaNs due to some of the financial data not being available for the entire period. In the illustration, NaN entries are shown in dark blue, and non-NaN entries appear in light blue. It is these light blue non-NaN entries which I would like to ideally combine into an optimal subsample.

I would like to find the largest possible contiguous block of data that is contained in my matrix, while ensuring that my matrix contains a sufficient number of periods.

In a second step I would like to find the sub-array of my data matrix that is at least 72 entries along the first dimension and is otherwise as large as possible, measured by the total number of entries.

What is the best way to implement this?

A big warning (may or may not apply depending on context)

For example, if this were hedge fund return data, selecting a sample without NaNs would exclude funds that blew up and ceased trading. Excluding imploded funds would bias estimates of expected returns upwards and estimates of variance or covariance downwards.

Picking a sample period with the fewest time series with NaNs would also exclude periods like the 2008 financial crisis, which may or may not make sense. Excluding 2008 could lead to an underestimate of how haywire things could get (though including it could lead to overestimate the probability of certain rare events).

Some things to do:

Code that does what you asked:

This should do what you asked and be quite fast. Be aware of the problems though if whether an observation is missing is not random and orthogonal to what you care about.

Inputs are a T by n sized matrix X:

Assuming you can rearrange the series, calculate the distance (you decide the metric, but if looking at is nan vs not is nan, Hamming is ok).

Now hierarchically cluster the series and rearrange them using either a dendrogram or http://www.mathworks.com/help/bioinfo/examples/working-with-the-clustergram-function.html

You should probably prune any series that doesn't have a minimum number of non nan values before you start.

First I have only little insight in financial mathematics. I understood it that you want to find the longest continuous chain of non-NaN values for each time series. The time series should be sorted depending on the length of this chain and each time series, not containing a chain above a threshold, discarded. This can be done using

What I do not know is, if you want to discard all periods within a time series that don't correspond to the biggest value, get all those chains as individual time series, ...

Feel free to drop a comment if it has to be more specific.

Not the answer you're looking for? Browse other questions tagged matlab or ask your own question.

7
Contrasting color for NaNs in imagesc
0
How do I select all non-NaN data from a specific column of a mxn array in as few steps as possible?
4
How to get rid of NaN while moving cells up column wise in matlab
8
Mean computation from accumulated row values while ignoring NaN in MATLAB
0
Matlab: find small islands of numbers surrounded by NaN
0
Save Matrix values when values change from NaN to a Number in MATLAB
8
find longest sequence of non nan values but allow for threshold