What's the time complexity of slicing a Python string? Given that Python strings are immutable, I can imagine slicing them being either O(1) or O(n) depending upon how slicing is implemented.

I need to write a function that iterates over all suffixes of a (potentially big) string. I could avoid slicing the string by representing a suffix as a tuple of the entire string plus an index to start reading characters from, but that's ugly. If instead I naively write my function like this:

Short answer: str slices, in general, copy. That means that your function that does a slice for each of your string's n suffixes is doing O(n2) work. That said, you can avoid copies if you can work with bytes-like objects using memoryviews to get zero-copy views of the original bytes data. See How you can do zero copy slicing below for how to make it work.

Long answer: (C)Python str do not slice by referencing a view of a subset of the data. There are exactly three modes of operation for str slicing:

The reason why #3 is the general rule is to avoid issues with large str being kept in memory by a view of a small portion of it. If you had a 1GB file, read it in and sliced it like so (yes, it's wasteful when you can seek, this is for illustration):

then you'd have 1 GB of data being held in memory to support a view that shows the final 1 KB, a serious waste. Since slices are usually smallish, it's almost always faster to copy on slice instead of create views. It also means str can be simpler; it needs to know its size, but it need not track an offset into the data as well.

How you can do zero copy slicing

There are ways to perform view based slicing in Python, and in Python 2, it will work on str (because str is bytes-like in Python 2, supporting the buffer protocol). With Py2 str and Py3 bytes (as well as many other data types like bytearray, array.array, numpy arrays, mmap.mmaps, etc.), you can create a memoryview that is a zero copy view of the original object, and can be sliced without copying data. So if you can use (or encode) to Py2 str/Py3 bytes, and your function can work with arbitrary bytes-like objects, then you could do:

The slices of memoryviews do make new view objects (they're just ultra-lightweight with fixed size unrelated to the amount of data they view), just not any data, so some_constant_time_operation can store a copy if needed and it won't be changed when we slice it down later. Should you need a proper copy as Py2 str/Py3 bytes, you can call .tobytes() to get the raw bytes obj, or (in Py3 only it appears), decode it directly to a str that copies from the buffer, e.g. str(remaining_suffix[10:20], 'latin-1').

It all depends on how big your slices are. I threw together the following two benchmarks. The first slices the entire string and the second only a little bit. Curve fitting with this tool gives

The first looks quite linear for slices of strings up to 4MB. I guess this really measures the time taken to construct a second string. The second is pretty constant, although it's so fast it's probably not that stable. 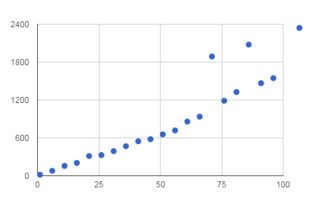 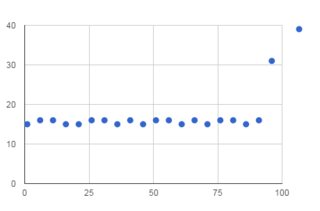 Not the answer you're looking for? Browse other questions tagged python time-complexity or ask your own question.

1
Time Complexity on string slicing operation in python 3
1
What is the complexity of s[::-1] where `s` is a string in python?
26
Does Python do slice-by-reference on strings?
11
Effcient way to find longest duplicate string for Python (From Programming Pearls)
4
Reverse string time and space complexity
1
Efficiently slicing a string in Python3
0
String slicing big O
0
How to implement a sliding window over the string in Python to have each new window constructed in O(1)
1
Pop a substring from end of string efficiently
-1
Return a copy of a string with indices inside a list replaced by a character
see more linked questions…