Most efficient way to map function over numpy array

What is the most efficient way to map a function over a numpy array? I am currently doing:

However, this is probably very inefficient, since I am using a list comprehension to construct the new array as a Python list before converting it back to a numpy array. Can we do better?

I've tested all suggested methods plus np.array(list(map(f, x))) with perfplot (a small project of mine).

Message #1: If you can use numpy's native functions, do that.

If the function you're trying to vectorize already is vectorized (like the x**2 example in the original post), using that is much faster than anything else (note the log scale): 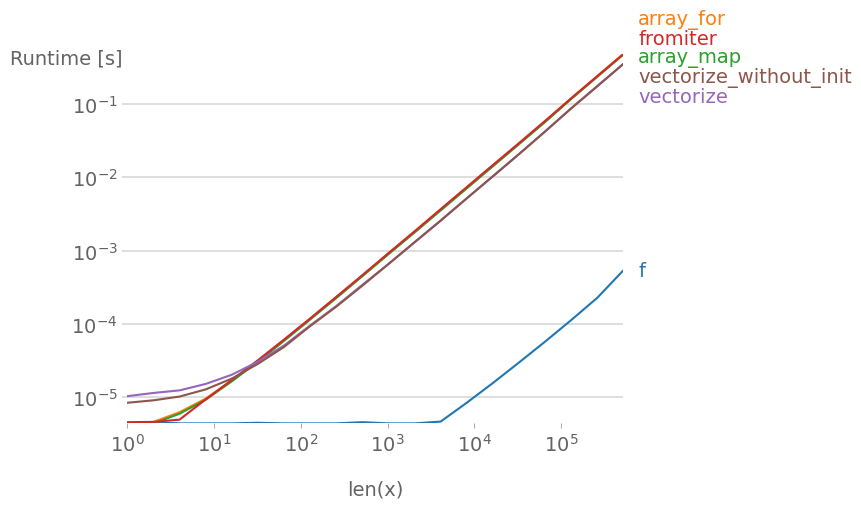 If you actually need vectorization, it doesn't really matter much which variant you use. 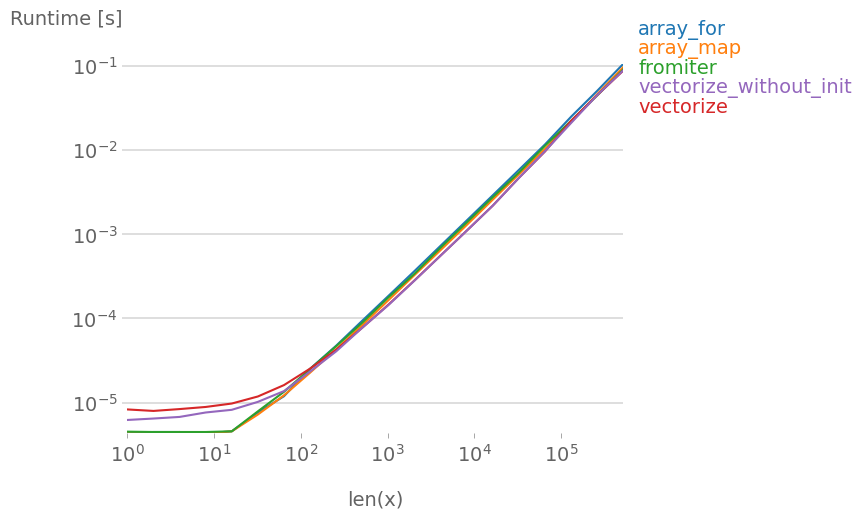 As noted by @user2357112, a "direct" method of applying the function is always the fastest and simplest way to map a function over Numpy arrays:

Generally avoid np.vectorize, as it does not perform well, and has (or had) a number of issues. If you are handling other data types, you may want to investigate the other methods shown below.

Here are some simple tests to compare three methods to map a function, this example using with Python 3.6 and NumPy 1.15.4. First, the set-up functions for testing:

Testing with five elements (sorted from fastest to slowest):

And with 1000s of array elements or more:

Different versions of Python/NumPy and compiler optimization will have different results, so do a similar test for your environment.

There are numexpr, numba and cython around, the goal of this answer is to take these possibilities into consideration.

But first let's state the obvious: no matter how you map a Python-function onto a numpy-array, it stays a Python function, that means for every evaluation:

So which machinery is used to actually loop through the array doesn't play a big role because of the overhead mentioned above - it stays much slower than using numpy's built-in functionality.

Let's take a look at the following example:

np.vectorize is picked as a representative of the pure-python function class of approaches. Using perfplot (see code in the appendix of this answer) we get the following running times: 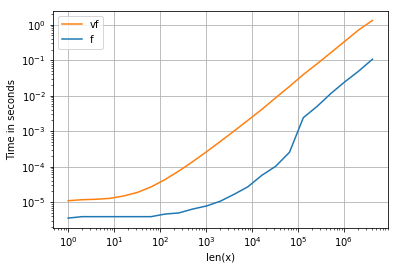 We can see, that the numpy-approach is 10x-100x faster than the pure python version. The decrease of performance for bigger array-sizes is probably because data no longer fits the cache.

It is worth also mentioning, that vectorize also uses a lot of memory, so often memory-usage is the bottle-neck (see related SO-question). Also note, that numpy's documentation on np.vectorize states that it is "provided primarily for convenience, not for performance".

Other tools should be used, when performance is desired, beside writing a C-extension from the scratch, there are following possibilities:

One often hears, that the numpy-performance is as good as it gets, because it is pure C under the hood. Yet there is a lot room for improvement!

The vectorized numpy-version uses a lot of additional memory and memory-accesses. Numexp-library tries to tile the numpy-arrays and thus get a better cache utilization:

Leads to the following comparison: 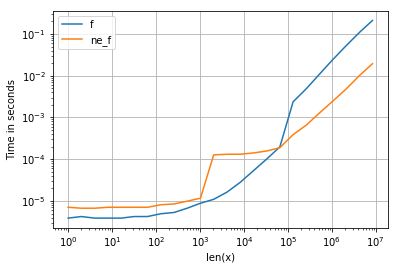 I cannot explain everything in the plot above: we can see bigger overhead for numexpr-library at the beginning, but because it utilize the cache better it is about 10 time faster for bigger arrays!

It is 10 times faster than the original numpy-approach: 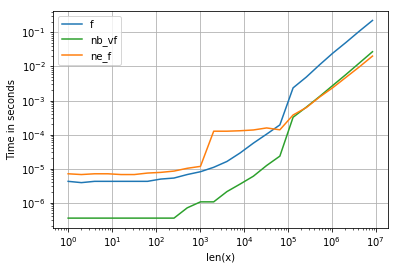 However, the task is embarrassingly parallelizable, thus we also could use prange in order to calculate the loop in parallel:

As expected, the parallel function is slower for smaller inputs, but faster (almost factor 2) for larger sizes: 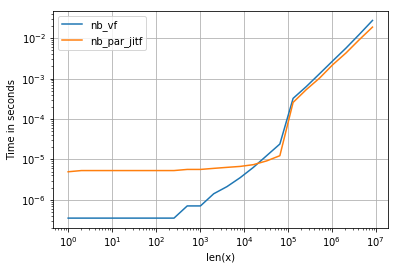 While numba specializes on optimizing operations with numpy-arrays, Cython is a more general tool. It is more complicated to extract the same performance as with numba - often it is down to llvm (numba) vs local compiler (gcc/MSVC): 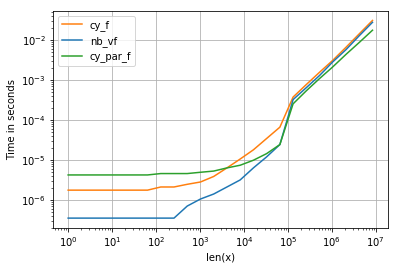 Obviously, testing only for one function doesn't prove anything. Also one should keep in mind, that for the choosen function-example, the bandwidth of the memory was the bottle neck for sizes larger than 10^5 elements - thus we had the same performance for numba, numexpr and cython in this region.

In the end, the ultimative answer depends on the type of function, hardware, Python-distribution and other factors. For example Anaconda-distribution uses Intel's VML for numpy's functions and thus outperforms numba (unless it uses SVML, see this SO-post) easily for transcendental functions like exp, sin, cos and similar - see e.g. the following SO-post.

Yet from this investigation and from my experience so far, I would state, that numba seems to be the easiest tool with best performance as long as no transcendental functions are involved.

Arithmetic operations on arrays are automatically applied elementwise, with efficient C-level loops that avoid all the interpreter overhead that would apply to a Python-level loop or comprehension.

Most of the functions you'd want to apply to a NumPy array elementwise will just work, though some may need changes. For example, if doesn't work elementwise. You'd want to convert those to use constructs like numpy.where:

It seems that no one has mentioned a built-in factory method of producing ufunc in numpy package: np.frompyfunc, which I have tested against np.vectorize, and have outperformed it by about 20~30%. Of course it will not perform as well prescribed C code or even numba(which I have not tested), but it can a better alternative than np.vectorize

I have also tested larger samples, and the improvement is proportional. See the documentation also here

Edit: the original answer was misleading, np.sqrt was applied directly to the array, just with a small overhead.

In multidimensional cases where you want to apply a builtin function that operates on a 1d array, numpy.apply_along_axis is a good choice, also for more complex function compositions from numpy and scipy.

to the perfplot code gives performance results close to np.sqrt.

All above answers compares well, but if you need to use custom function for mapping, and you have numpy.ndarray, and you need to retain the shape of array.

I have compare just two, but it will retain the shape of ndarray. I have used the array with 1 million entries for comparison. Here I use square function, which is also inbuilt in numpy and has great performance boost, since there as was need of something, you can use function of your choice.

here you can clearly see numpy.fromiter works great considering to simple approach, and if inbuilt function is available please use that.

Not the answer you're looking for? Browse other questions tagged python performance numpy or ask your own question.

6
Apply function to all elements in NumPy matrix
0
How to efficiently generate matrix from vector in numpy?
0
Apply function over numpy arrays without looping
0
Invert particular bits in a byte array
1
Numpy: change score to 4 GPA score
0
How to perform an operation on every element of multi-dimensional array?
128
Efficient evaluation of a function at every cell of a NumPy array
55
Using Numpy Vectorize on Functions that Return Vectors
44
Efficient creation of numpy arrays from list comprehension and in general
24
Applying a function along a numpy array
See more linked questions