What are some good ways to manage a changelog using Git? [closed]

Ask Question
Asked 11 years, 5 months ago
Active 9 months ago
Viewed 129k times
235
Closed. This question needs to be more focused. It is not currently accepting answers.

I've been using Git for a while now, and I recently started using it to tag my releases so that I could more easily keep track of changes and be able to see which version each of our clients is running (unfortunately the code currently mandates that each client have their own copy of the PHP site; I'm changing this, but it's slow-going).

In any case, we're starting to build some momentum, and I thought it would be really good to be able to show people what has changed since the last release. The problem is, I haven't been maintaining a changelog, because I don't have a good idea of how to go about it. For this particular time, I can run through the log and manually create one, but that will get tiring very quickly.

I tried googling "git changelog" and "git manage changelog", but I didn't find anything that really talked about the workflow of code changes and how that coincides with the changelog. We're currently following Rein Henrichs' development workflow and I would love something that went along with that.

This was in 2015, but for the sake of future searchers, it's now possible to generate gorgeous logs with:

Or, if you want it even prettier (with color for the terminal):

Piping that output to ChangeLog is what I currently use in all my projects, and it's simply amazing.

And commit that in your version release commit.

If your problem is that those commit subjects aren't anything like what you'd want to put in a changelog, you pretty much have two options: keep doing everything manually (and try to keep up with it more regularly instead of playing catch-up at release time), or fix up your commit message style.

One option, if the subjects aren't going to do it for you, would be to place lines like "change: added feature foobar" in the bodies of your commit messages, so that later you could do something like git log --pretty=%B | grep ^change: to grab only those super-important bits of the messages.

I'm not entirely sure how much more than that Git could really help you create your changelogs. Maybe I've misinterpreted what you mean by "manage"?

TL;DR: You might want to check gitchangelog's own changelog or the ASCII output that generated the previous.

If you want to generate a changelog from your Git history, you'll probably have to consider:

With all this in mind, I created and used gitchangelog. It's meant to leverage a Git commit message convention to achieve all of the previous goals.

This is the standard git log --oneline to show how this information could be stored::

To see an actual output result, you could look at the end of the PyPI page of gitchangelog.

To see a full documentation of my commit message convention, you can see the reference file gitchangelog.rc.reference.

How to generate an exquisite changelog from this

gitchangelog will generate a full changelog (with sectioning support as New, Fix...) and is reasonably configurable to your own committing conventions. It supports any type of output thanks to templating through Mustache, Mako templating, and has a default legacy engine written in raw Python; all current three engines have examples of how to use them and can output changelogs as the one displayed on the PyPI page of gitchangelog.

More details are on GitHub: https://github.com/tomasbjerre/git-changelog-lib 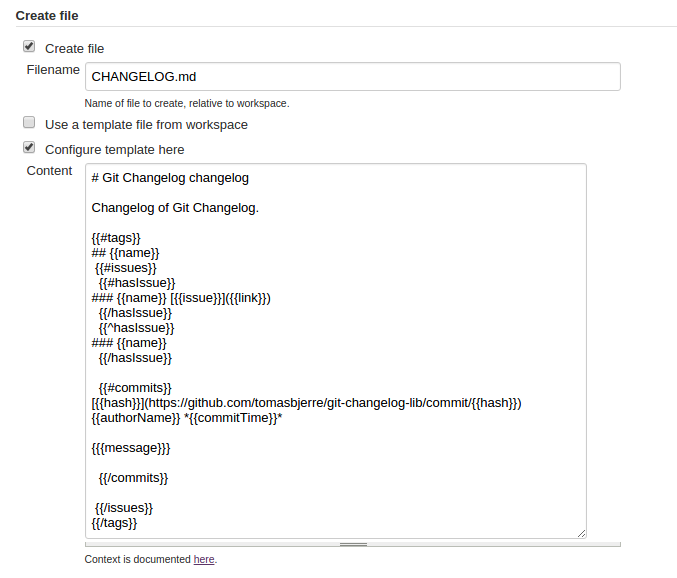 For a GNU style changelog, I've cooked the function:

It is not perfect (e.g., files should be relative to their ChangeLog path, so python/py-symtab.c without gdb/ since I will edit the gdb/ChangeLog), but it is a good starting point.

I have to agree with Tromey though: duplicating Git commit data in the ChangeLog is useless.

If you are going to make a changelog, make it a good summary of what is going on, possibly as specified at Keep a Changelog.

I let the CI server pipe the following into a file named CHANGELOG for each new release with the date set in the release-filename:

Based on bithavoc, the following lists the last tag until HEAD. But I hope to list the logs between two tags.

8
How to get 'git diff' to only show commit messages
3
Gitlab Generate Changelog Script
2
Do I need to create a changelog file with Git?
0
Git Environment Variables within Managed Code
0
git changelog based on a release branch

3471
View the change history of a file using Git versioning
12981
What is the difference between 'git pull' and 'git fetch'?
2191
Branch from a previous commit using Git
1899
Throw away local commits in Git
4447
Squash my last X commits together using Git
2740
How do you push a tag to a remote repository using Git?
2443
What is the best (and safest) way to merge a Git branch into master?
1306
Why are there two ways to unstage a file in Git?
2338
What are the differences between .gitignore and .gitkeep?
2851
What does cherry-picking a commit with Git mean?