Why does my 160kb app background become 49 MB at run time?

I decided to investigate my app's memory usage and I looked at Android Studio's Memory Monitor and my memory usage was around 68 MB. It looks too high to me. 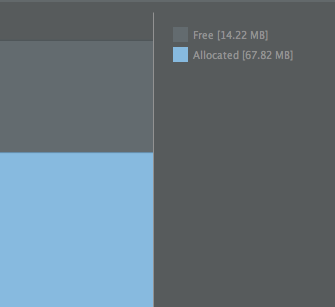 I opened memory allocator and started tracking from the beginning of the application. I saw that there is a 49 MB allocation of a NonMovableArray, which is a Bitmap.

I debugged the application and found out that it was the background I was using. The lines below are from PhoneWindow.java file, that's where Android assigns the background to the screen I believe. The background object had a size of 49 MB and 2625x4669 resolution.

I have no overdraw in my app, and I have a single background that is applied to entire theme.

I have a background drawable in drawable folder in JPG format with 750x1,334 resolution.

There are two points I don't understand.

If you guys can explain this to me that would be great. Thanks!

You put the image in res/drawable/. This is not a good choice, as that is a synonym for res/drawable-mdpi/. Hence, Android is resampling your image, thinking that you were aiming for -mdpi devices (~160dpi), so the image is about the same physical size on the Nexus 6 (3.5x the density).

Whether res/drawable-nodpi/ or res/drawable-anydpi/ is the right choice depends a bit on your alternative versions of this resource, though either will probably work.

The default and highest quality configuration for a Bitmap is ARGB_8888, which will use 4 bytes per pixel. Since your image is being scaled to 2625*4669, that's:

I'm not sure about the resolution differences, but the difference between the used memory and the size of the file is because an image in the JPG format (as many other formats) is compressed (see the wiki for how). When you then load it into memory, it is no longer compressed, as it's used to draw every single pixel on the screen.

Not the answer you're looking for? Browse other questions tagged java android performance android-memory or ask your own question.

583
Why does C++ compilation take so long?
1586
Why does Java have transient fields?
1606
Why does changing 0.1f to 0 slow down performance by 10x?
881
Why does Python code run faster in a function?
1837
Why does this code using random strings print "hello world"?
82
Different resolution support android
462
Mipmap drawables for icons
3
App Memory Usage differs between Devices
883
Why does C++ code for testing the Collatz conjecture run faster than hand-written assembly?
3
Image loading issue for different resolutions for XXXHDPI devices