When I try to add a migration to my code, e.g: dnx ef migrations add initial,

This will give me compilation errors when adding a new migration or updating the database.

In the Startup.cs class I have these lines in the constructor:

Here env.WebRootPath is null and in the Initialize function this throws an exception.

In the ConfigureServices function of the Startup.cs I resolve my class dependencies:

There is an issue reported on github regarding my problem:

I used the workaround in the comments now it seems to be working fine:

This thread is I believe best one to find out the answer for this problem.

I spent a bit of time looking for answer and I figured out that the way to sort this out rather than check if path exists(in controller or methods) is to update your Program.cs:

This way you will ensure that there will be webroot folder ready for placing files inside it and _environment.webRootPath will not be null and also you can even customize the name of the folder.

The second option to do this is to manually add "wwwroot" folder in the project from Visual Studio level. The program should pick this up and allocate as wwwroot folder: 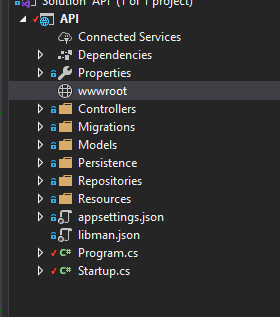 In my case, the problem was that the wwwroot folder was empty and VS didn't recognized it.

The solution: create a placeholder.txt in wwwroot.

While investigation I got the description that This is the variable which gives the same functionality as Server.MapPath given in asp.net

Good explanation:- What is the equivalent of Server.MapPath in ASP.NET Core?

This is the actual code which gives me the error, I replace the WebRootPath with another way to solve the issue and it works. you can assign and use in the entire application.

I was faced with the same issue but with what seems a unique scenario to this post, so I'll add it.

I have a solution with several nested projects. Similar to this:

Per other people's answers, adding a wwwroot folder in the Solution folder made WebRootPath have a value, but it was the Solution folder path. I had to modify my launch task's current working directory (cwd) in VS Code. It defaulted to "cwd": "${workspaceFolder}", and I had to change it to "cwd": "${workspaceFolder}/MvcProject"

I had this same problem again on another machine, and was glad I commented on this. This time, the problem was that we didn't have any files in one of our wwwroot folders, and empty folders don't get committed to git repos. Add a file to your folder, if you need it!

(It was there for consistency with setup for static file handling. We'll eventually have something in there before the project launches!)

In case someone still faces this problem, in my case the issue was default constructor which I created it for a test.

So, remove the default constructor if any.

124
What is the equivalent of Server.MapPath in ASP.NET Core?
0
ASP.Net Core doesn't recognize Request.MapPath in Razor segment

4
EF7 constructor with MVC6 dependency injection
3
How do I dynamically choose a connection string based on Environment in .Net Core startup?
0
asp.net core and EF core error while add migration
1
How can I get IHostingEnvironment from DbContext in ASP.NET Core
1
Loading different piece of configuration every request
1
Unable to create an object of type 'AppDbContext'. For the different patterns supported at design time
1
'ConfigureServices returning an System.IServiceProvider isn't supported.' in .NET Core 3.1 using Autofac
0
Object deserialization fails POST in Asp Net Core MVC Controller
1
Google App Engine with .Net Core 3.1 MVC app - Loss of session data between Controllers