What is the time complexity of my function? [duplicate]

Ask Question
Asked 5 years ago
Active 3 years, 2 months ago
Viewed 7k times
97
This question already has answers here:
How to find time complexity of an algorithm (9 answers)
Big O, how do you calculate/approximate it? (23 answers)
Finding Big O of the Harmonic Series (2 answers)
Closed 3 years ago.

Started studying about complexity, I'm struggling with this one:

Edit: (not a duplicate) I know what Big O is. I've asked the correct evaluation in a specific case.

For each iteration, the inner loops runs n / i times.

The total number of runs is:

Hence the complexity is O(N.log(N)) as you expected.

This is n multiplied by the sum of harmonic series, which does not have a nice closed form representation. But as shown here it is O(log(n)). So overall the algorithm is O(n log(n))

As an alternative, use a variable substitution y = n - x followed by Sigma notation to analyse the number of iterations of the inner while loop of your algorithm.

The above overestimates, for each inner while loop, the number of iterations by 1 for cases where n-1 is not a multiple of i, i.e. where (n-1) % i != 0. As we proceed, we'll assume that (n-1)/i is an integer for all values of i, hence overestimating the total number of iterations in the inner while loop, subsequently including the less or equal sign at (i) below. We proceed with the Sigma notation analysis:

where we, at (ii), have approximated the n:th harmonic number by the associated integral. Hence, you algorithm runs in O(n·ln(n)), asymptotically.

Leaving asymptotic behaviour and studying actual growth of the algorithm, we can use the nice sample data of exact (n,cnt) (where cnt is number of inner iterations) pairs by @chux (refer to his answer), and compare with the estimated number of iterations from above, i.e., n(1+ln(n))-ln(n). It's apparent that the estimation harmonize neatly with the actual count, see the plots below or this snippet for the actual numbers. 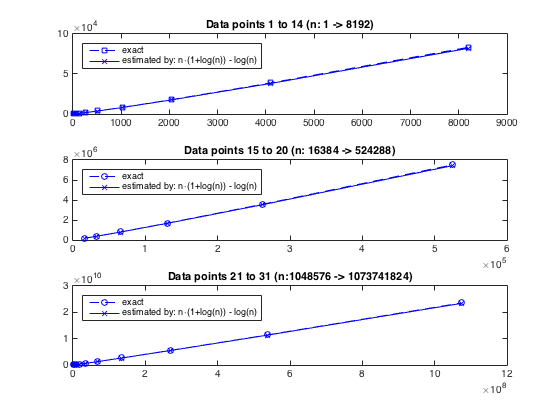 Finally note that if we let n->∞ in the sum over 1/i above, the resulting series is the infinite harmonic series, which is, curiously enough, divergent. The proof for the latter makes use of the fact that in infinite sum of non-zero terms naturally is infinite itself. In practice, however, for a sufficiently large but not infinite n, ln(n) is an appropriate approximation of the sum, and this divergence is not relevant for our asymptotic analysis here.

Attempting this by testing and graphics. The log2 vs log2 plot looks fairly linear. Something between more than linear O(n) and less than O(n*log(n)). "Draw" your own conclusion. 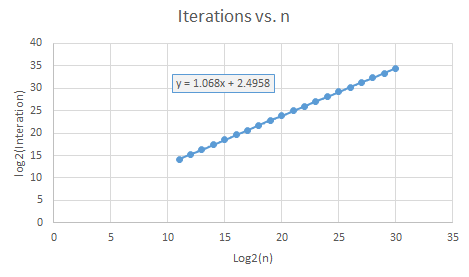 Not the answer you're looking for? Browse other questions tagged c algorithm time-complexity or ask your own question.

914
Big O, how do you calculate/approximate it?
941
How to find time complexity of an algorithm
48
Finding Big O of the Harmonic Series
0
Time complexity and space of the function
5061
What is a plain English explanation of “Big O” notation?
2
What is the time complexity of this pseudocode?
1
Why does this algorithm run in O(n log n)?