I'm not worried about which language is used. And I'm not looking for code samples or anything, just interested in the logic behind it.

If you're running windows, fiddler is a great tool. It has a setting to simulate modem speed, and for someone who wants more control has a plugin to add latency to each request.

I prefer using a tool like this to putting latency code in my application as it is a much more realistic simulation, as well as not making me design or code the actual bits. The best code is code I don't have to write.

Starting with Chrome 38 you can do this without any plugins. Just click inspect element (or F12 hotkey), then click on "toggle device mod"

Among many other features it allows you to simulate specific internet connection (3G, GPRS)

P.S. for people who try to limit the upload speed. Sadly at the current time it is not possible.

P.S.2 now you do not need to toggle anything. Throttling panel is available right from the network panel.

Note that while clicking on the No throttling you can create your custom throttling options. 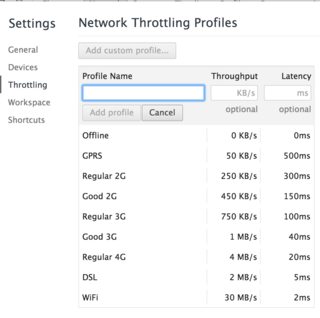 On Linux machines u can use wondershaper

the {down} and {up} are bandwidth in kpbs

So for example if you want to limit the bandwidth of interface eth1 to 256kbps uplink and 128kbps downlink,

To clear the limit,

I was using http://www.netlimiter.com/ and it works very well. Not only limit speed for single processes but also shows actual transfer rates.

You can try Dummynet, it can simulates queue and bandwidth limitations, delays, packet losses, and multipath effects

Use a web debugging proxy with throttling features, like Charles or Fiddler.

You'll find them useful web development in general. The major difference is that Charles is shareware, whereas Fiddler is free.

Also, for simulating a slow connection on some *nixes, you can try using ipfw. More information is provided by Ben Newman's answer on this Quora question

You can use NetEm (Network Emulation) as a proxy server to emulate many network characteristics (speed, delay, packet loss, etc.). It controls the networking using iproute2 package and it's enabled in the kernel of the most Linux distributions.

It is controlled by the tc command-line application (from the iproute2 package), but there are also some web interface GUIs for NetEm, for example PHPnetemGUI2.

The advantage is that, as I wrote, it can emulate not only different network speeds but also, for example, the packet loss, duplication and/or corruption, random or defined delay, etc., so you can emulate various poorly performing networks.

I have been using it to test the performance of an Android app on various emulated poor-performance networks.

Use a tool like TCPMon. It can fake a slow connection.

Basically, you request it the exact same thing and it just forwards the exact same request to the real server, and then delays the response with only the set amount of bytes.

One common case of shaping a single TCP connection can actually be assembled from dual pairs of socat and cpipe in UNIX fashion like this:

This simulates a connection with bandwidth of approximately 300kB/s from your service at :5000 and to at approximately 10kB/s and listens on :5555 for incoming connections. Caveat: Note that this per-connection, so each individual TCP connection gets this amount.

Explanation: The outer (left) socat listens with the given options on :5555 as a forking server. The first cpipe command in the SYSTEM:... option then throttles data that went into socket :5555 (and comes out of the first, outer socat) to at most 10kByte/s. That data is then forwarding using another socat which connects to localhost:5000 (where the service you want to slow down should be listening). Data from localhost:5000 is then put into the right cpipe command, which (with the given values) throttles it to about 300kB/s.

The option -ngr to cpipe is important. It causes cpipe to read non-greedily from its input file-descriptor. Otherwise, you might get stuck with data in the buffers not being forwarded and waiting for a reply.

Using the more common buffer tool instead of cpipe is likely possible as well.

(Credits: This is based on the "double-tee" recipe by Christophe Loor from the socat documentation)

Mac OSX since 10.10 has an app called Murus Firewall, which acts as a GUI to pf, the replacement for ipfw.

It works very well for system-wide or domain-specific throttling. I was just able to use it to slide my download speed between 300Kbps and 30Mbps to test how a streaming video player adjusts.

Updating this (9 years after it was asked) as the answer I was looking for wasn't mentioned:

Firefox also has presets for throttling connection speeds. Find them in the Network Monitor tab of the developer tools. Default is 'No throttling'.

More in the Dev Tools docs.

Personally, whilst Dummynet is good, I find NetEm to be the most versatile for my use-cases; I'm usually interested in the effect of delays, rather than bandwidth (i.e. WiFi connection issues), and it's super-easy to emulate random packet loss/corruption, etc. It's also very accessible, and free (unlike the hardware-based Linktropy).

On a side-note, for Windows, Clumsy is awesome. I would also like to add that (regarding websites) browser throttling is not an accurate method for emulating real-life network issues (I think "TKK" commented on a few of the reasons why above).

Hope this helps someone!

It's a bit old school, but you can use it to simulate a slower connection. It's Windows based, and the tool allows the administrator to monitor how much traffic the router is getting from a certain machine, or how much WWW traffic it is forwarding, for example.

There is a simple and practical way to do it, without any application or code. Just connect to the internet using a mobile hotspot. Keep moving the hotspot (phone) away from the connected device to simulate slower networks. 😉

1
How to make slower my web page?
249
Network tools that simulate slow network connection
46
Network throttling with chrome and selenium
7
Simple way to simulate a slow network in python
5
What is the purpose of setTimeout in Angular?
4
Is there a way to limit speed and response time in Node (Express)?
5
Simulate slow internet connection for React Native app development
4
How do I reproduce slow internet speed in a browser?
0
slowly internet simulation on localhost with YSlow
1
How can I limit the load speed of an HTML page?
See more linked questions

320
Artificially create a connection timeout error
280
SQL Server: Query fast, but slow from procedure
135
iPhone Simulator - Simulate a slow connection?
4
Simulating a slow DB connection
1581
Why does changing 0.1f to 0 slow down performance by 10x?
5
Slow QTcpServer with lots of simultaneous clients
773
Why is my program slow when looping over exactly 8192 elements?