I am trying to upload an Apple TV App to the App Store for testing purposes, but I got the issue:

as in the below image: 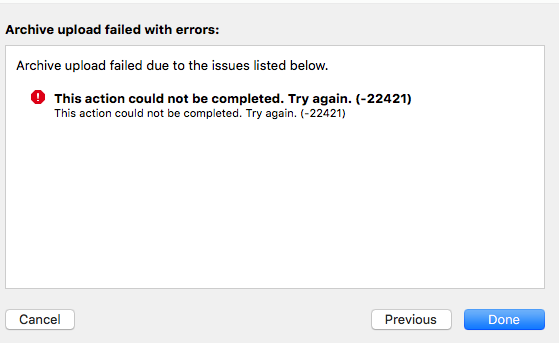 So what can I do?

This happens because Apple's servers may not be working correctly. Just wait and try later or next time. It will work for sure eventually.

Just try exporting the iPA file and then upload that exported iPA file with application loader. It will solve your problem.

There's another way to fix above error. Try this, it fixed it for me. Open Terminal and run:

Three above code line will update iTMSTransporter, then you can try uploading in XCode again.

Solved the issue every time =)

As with all thing Xcode related. A simple reboot fixed the problem for me.

Will work for 100% sure. I had the same issue but its solved by below steps:

I hope this will work for all.

I was experiencing the exact same error hence being here (failed about 6 times over an hour).

I just tried again now (without changing anything), it worked by itself.

I read on the Apple-forums that it's an issue with Apple servers, nothing to do with your Xcode.

I also read that others trying the upload via ApplicationLoader (Menu -> Xcode -> Open Developer Tool -> Application Loader), this will ask where your code is, you would then have to select your Archive (not the source code), you can upload your code this way if you need. I personally prefer the built-in Xcode instead.

For the record, I am copying the thread from Apple Forums.

Uncheck "Include bitcode" box, worked for me.

Apple appear to have fixed the current particular bug that was present for about the last week.

In short, you can upload with the blue "Upload to App Store..." button, rather than having to use the application loader.

do indeed seem to go to the app store...! 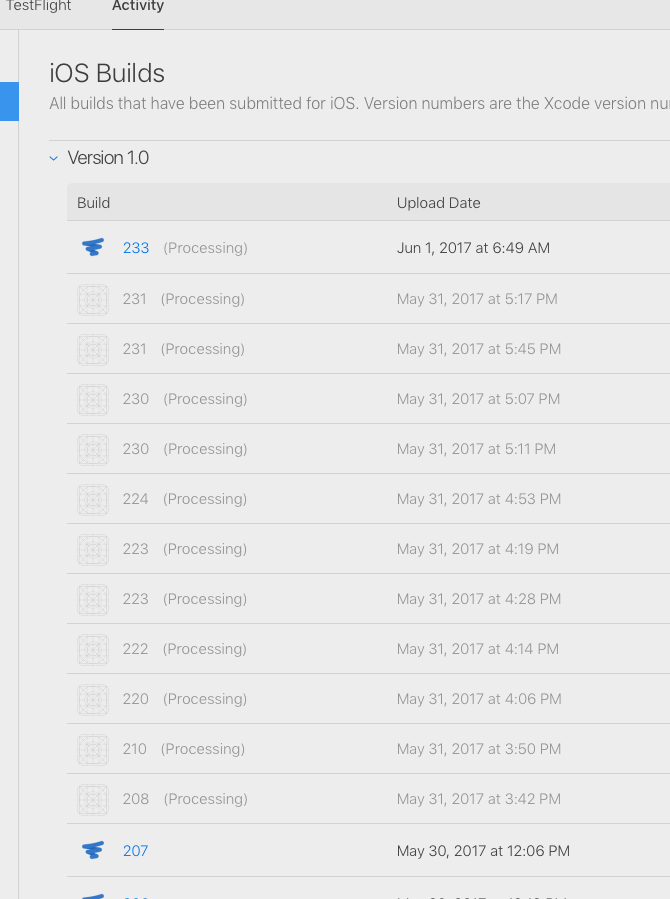 In fact, unnoticed by me, they were all going up to the app store, but it looks like they were just getting stuck on endless processing.

I then did I believe exactly what StevenOjo reported (yesterday) above:

It's possible it would actually work fine now with my usual account; I don't know.

To be clear, after a very short time (say, two minutes), the final build (ie, 233 above) did indeed become "ready to test" as normal on the app store .. 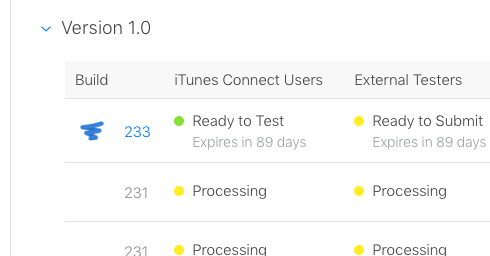 All the "dud" uploads seem to be stuck forever on processing.

The staggering incompetence of Apple has reached "conspiracy theory" levels....

It is literally not possible to hire programmers and sysadmins, who are this bad.

There must be some sort of conspiracy theory, behind the utter fiasco that is Apple's provisioning. Maybe it's some sort of reverse-psychology marketing plot or something ....... who knows.

I then tried with a new build number using the normal "Upload to the App Store..." cheery blue button.

I then tried using Application Loader as described above...

It DID work with ApplicationLoader.

Unfortunately, itmstransporter is probably not relevant.

The problem can not be solved with xCode Upload Process. I was facing same issues few days ago when submitting few of my apps and all apps showing same error. After many tries, I used Application Loader to upload app and it worked.

Submit it! It works!

i have resolved same issue

has been Resolved in Xcode 9. Now, we can upload app through Xcode Organizer also.

I've tried to load archive nearly 10 times (with all kinds of cleans and reloads, with different versions and provisioning files), still received the same error. Then suddenly on my next attempt it showed me: "cannot proceed with delivery an existing transporter instance is currently uploading this package", I did the following and it helped:

Basically, you need to clear out the transport tokens. This can happen if you were to close out of Xcode while in the middle of submitting an app to iTunes Connect.

Delete any .token files in this directory. If you are unable to find the .token files, this is because they are hidden in Finder. To hide/show hidden files in Finder, use the following Terminal command (TRUE = UNHIDE, FALSE = HIDE):

I increased build number but the problem remained.

This action could not be completed. Try again.

Instead of clicking the blue Upload to App Store… button from the Organizer or while Archiving, Xcode offers a better tool to do this, but it is a little hidden and the process is not clear how to use it.

Here is what I documented while submitting our latest iOS application to the App Store:

First, do NOT use the blue Upload to App Store… button.

Sign in with appropriate credentials that allow you to upload to the App Store.

When Application Loader shows you its main screen, select the Choose button on the lower right of the main window and open your IPA that you exported for the App Store.

Proceed with the submission.

Why you want to do this:

Just In case it is same my mistake.

Did you check both provisioning profile settings in "your Project" and "your Targets"? 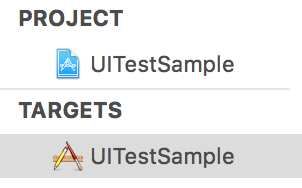 In my case it was caused by lack of some of the app icons in the Images.xcassets

Both developers on our team experienced the same problem, from different machines on May 31st 2017. I worked around the problem by:

What a lovely waste of time. Hopefully these steps work for others and save some time.

When you receive error "Action could not be completed. Try Again (-22421)", Just try to resubmit same app on iTunes store using XCode again, and you will get the actual error messages next time.

Detailed error message which your received next time will help you what to do actually!!!

If you are receiving same error again and again, you can submit app using "App Loader" and it may success to submit.

I had this problem over and over again. No descriptive description, just the error message that OP posted.

In fact, it was a problem with the build and so had nothing to do with Apple's servers at all, as you might think.

The solution was to go to Organizer and Export the build, then upload it via Application Loader. Here I got the correct error messages. In my case, it was a problem with CocoaPods breaking app extension validations. I solved this and then I could upload my build.

I had the same issue. It was related to the Build Settings -> Code Signing Identity -> Release which was set to iOS Developer. If has to be set to iOS Distribution in order for Xcode upload to work.

Certain combined steps from answer of this thread that worked for me. I am writing the process that worked fine for me.

1) Open terminal and run this

iTMSTransporter will then update itself, wait till process completes.

3) Clean the project and archive then export the app from organiser as an IPA for app store distribution.

4) Logging into application loader with same account and upload the ipa.

You can try following solutions:
Use Application Loader to upload your app, as Xcode organizer can't upload file (rejects IPA) sometimes, without genuine reason and it's frequently occurring issue, with Xcode Organizer, that apple could not resolve permanently.

Cocoa Keys: Here, is list of keys (with privacy statements) that you should consider to add in your info.plist file, if you have used that service in your application. 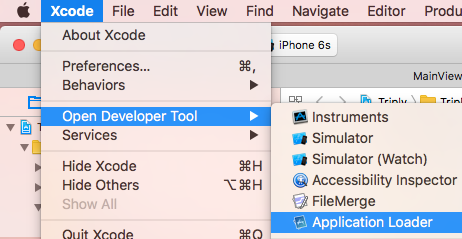 The best solution is indeed Application Loader. I can't comment on Naresh's note on this (I'm too much of a newbie to StackOverflow), but am warning you that if you are using Swift, don't the use Xcode ipa generation system. I prefer manual creation of the IPA by:

Validating the same archive that failed to upload worked for me. Or just Apple's servers came back up.

If you connect a device while the app is building/archiving, your generic device will change to your connected device automatically, and when you are trying to upload to the app store you will have that weird crash.

will change to this automatically:

My problem was with the provisional profiles.

So for me it worked:

I checked too, in member center and delete all invalid provisionals profiles and:

2 - Open Xcode, do clean and build of my project.

1253
How can I develop for iPhone using a Windows development machine?
1115
How to change the name of an iOS app?
1778
How can I make a UITextField move up when the keyboard is present - on starting to edit?
1302
Xcode - How to fix 'NSUnknownKeyException', reason: … this class is not key value coding-compliant for the key X" error?
368
iTunes Connect: How to choose a good SKU?
787
Xcode process launch failed: Security
902
Xcode error "Could not find Developer Disk Image"
852
Xcode 7 error: "Missing iOS Distribution signing identity for ..."
6
iOS - Error: This action could not be completed. Try Again (-22421)
2
This action could not be completed. Try again. While adding account in Xcode