How do I set up Jupyter/IPython Notebook for Django?

I have been using the method described in this post for setting up IPython Notebook to play nicely with Django. The gist of the method is to create an IPython extension which sets the DJANGO_SETTINGS_MODULE and runs django.setup() when IPython starts.

The code for the extension is:

With a recent upgrade to Jupyter Notebook this setup is now broken for me. I am able to run Django code in the Jupyter notebook by adding a similar bit of code to the first cell of the notebook. However, I was not able to figure out how to get Jupyter to run the extension automatically so I would not have to do this again for each and every notebook I am creating.

What should I do to get Django and Jupyter to play nicely?

Just for completeness (but it's 2018, so maybe things changed since this question was posted): you can actually install a Jupyter Python kernel in your Django environment that will then connect (run under) a different Jupyter server/environment (one where you've installed widgets, extensions, changed the theme, etc.). django_extensions right now still does only part of the required work :-)

This assumes you have a Jupyter virtual environment that's separate from Django's one and whose kernels/extensions are installed with --user. All the Jupyter extensions (and their dependencies) are installed in this venv instead of the Django's one/ones (you'll still need pandas, matplotlib, etc. in the Django environment if you need to use them together with Django code).

In your Django virtual environment (that can run a different version of Python, including a version 2 interpreter) install the ipython kernel:

This will create a kernel configuration directory with the specified -–name in your user’s Jupyter kernel directory (on Linux it's ~/.jupyter/ while on OSX it’s ~/Library/Jupyter/) containing its kernel.json file and images/icons (by default the default Jupyter icon for the kernel we’re installing are used). This kernel will run inside the virtual environment what was active at creation, thus using the exact same version of python and all the installed modules used by our Django project.

Running ./manage.py shell_plus --notebook does something very similar, but in addition to requiring everything (including the Jupyter server and all the extensions) installed in the current venv, it’s also unable to run notebooks in directories different from the project’s root (the one containing ./manage.py). In addition it’ll run the kernel using the first executable called python it finds on the path, not the virtual environment’s one, making it misbehave when not started from the command line inside an active Django virtual environment.

To fix these problems so that we're able to create a Notebook running inside any Django project we have so configured and to be able to run notebooks stored anywhere on the filesystem, we need to:

Here's what just worked for me

AND, importantly, what didn't work was changing directories from inside the notebook environment. If I tried to work with any notebook that was not in the directory that manage.py shell_plus --notebook was run in, then the kernal was not configured correctly. For me, having the notebook be configured for just a single directory at a time was good enough. If you need a more robust solution, you should be able set PYTHONPATH prior to starting jupyter. For example add export PYTHONPATH="$PYTHONPATH:/path/to/django/project" to a virtualenv activate script. But I haven't tried this.

For example, in your docker compose file;

This is what I did:

Note: I am using Python 3.7 and Django 2.1, it works for Django 2.2. I don't have to run anything in my first cell, and this works like charm as long as you don't mind having the notebooks in the root of your Django project.

It is also assumed that you have created a Django project and your current working directory is the root of this project.

Again, you don't have to run anything in the first cell, and you can corroborate by running dir() to see the names in the current local scope. 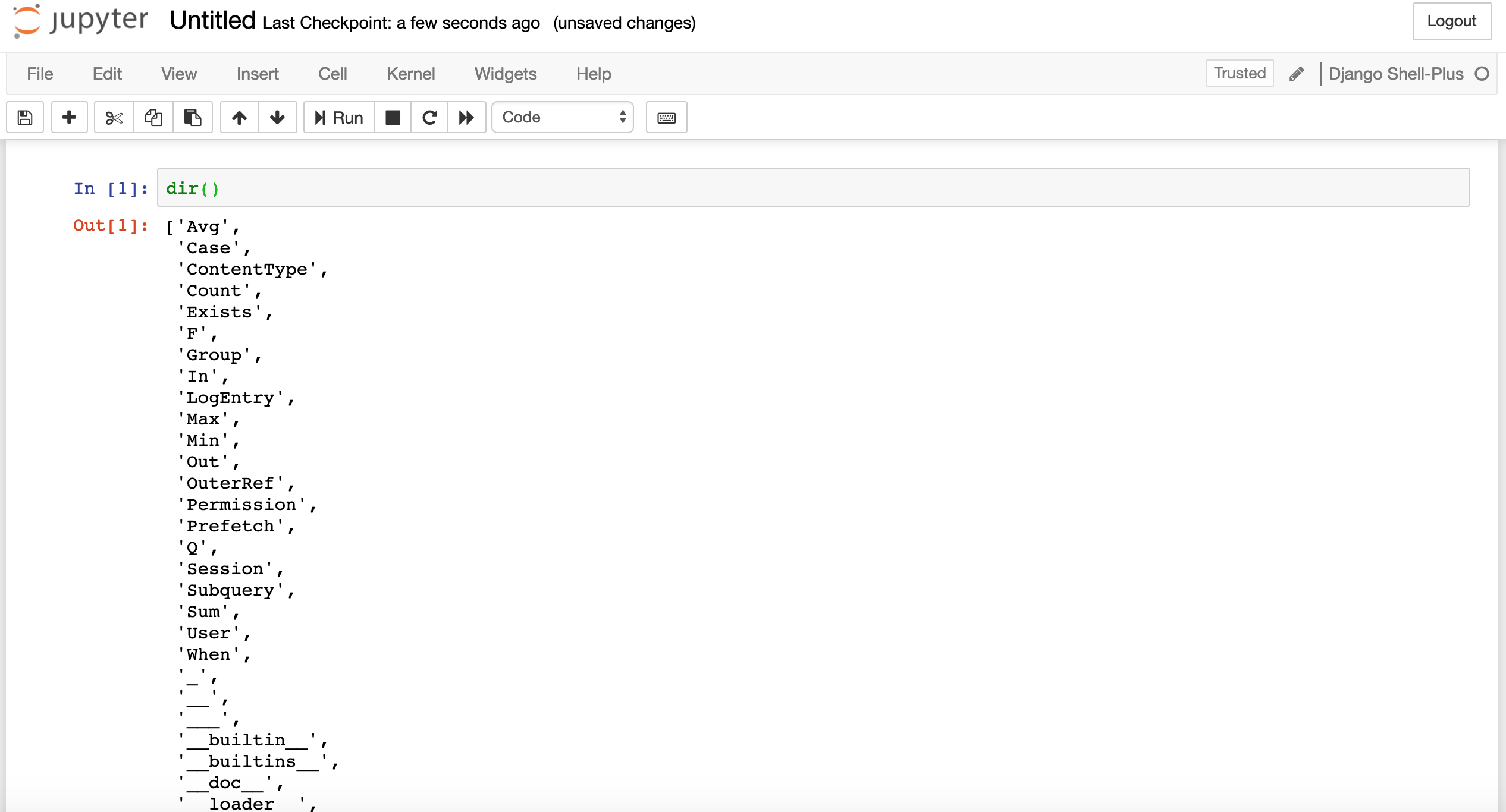 If you want to put your notebooks in a directory called notebooks at the root directory, you can do the following:

Thanks to Mark Chackerian whose answer provided the idea to make run the notebooks in a directory other than the project's root.

These are the modules that are imported automatically thanks to shell_plus:

Actually turns out you (might not) need to do all that crap. Just install django-extensions and run jupyter!

In the browser, start a new "Django Shell-Plus": 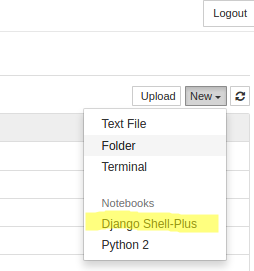 And you should be good to go. eg:

While the accepted answer from RobM works, it was less clear than it could be and has a few unnecessary steps. Simply put, to run notebooks through Django from a notebook environment outside of the project directory:

Run a notebook from within Django, then close it:

This will create your kernel, which we will now edit to point to an absolute path of Python rather than a relative path.

On OSX, the kernel file is at: ~/Library/Jupyter/kernels/django_extensions/kernel.json

We only need to make two changes:

The first is to edit the first value in the "argv" list from "python" to the full address of the python version in your Django virtual environment. E.g.: "/Users/$USERNAME/Documents/PROJECT_FOLDER/venv/bin/python"

Secondly, to the "env" dictionary, add "DJANGO_SETTINGS_MODULE": "mysite.settings", where mysite is the folder that contains your Django settings.

Optionally, change the value of "display_name".

Now when you run a notebook from any directory, choosing the "Django Shell-Plus" kernel will allow your notebooks to interact with Django. Any packages such as pandas will need to be installed in the Django venv.

I will add some information to the very complete answer of RobM, for the benefit of the very rare developers that use buildout along with djangorecipe djangorecipe as I do... I refer to jupyter lab as I use that but I think all info can be applied to old jupyter notebooks.

When using buildout you end up with a 'bin/django' handler you'll use instead of 'manage.py'. That's the script that defines the whole path. I added one more part in my buildout.cfg:

so that another script named ipython will be created in ./bin directory. I point kernelspec to that interpreter. Moreover I use kernel argument rather than "-m", "ipykernel_launcher" so that the kernel definition I use is:

Due to how the ipython script is created by buildout there's no need to add environmental variables in my case.

As Rob already mentioned, jupiterlab is only installed in one environment where I start it with the command:

not in the environment of Django project whare I only install ipykernel (that has already a bunch of 20 dependencies).

Since I tend to have quite a lot of projects I find it usefull to have a single point where I start jupyter lab with many links to the projects so that I can reach them easily. Thanks to the extension provided by django_extension I don't need any extra cell to initialize the notebook.

Any single kernel added in this way can be found with the command:

And clearly listed in the launcher of jupyter lab

Not the answer you're looking for? Browse other questions tagged django jupyter-notebook ipython jupyter or ask your own question.

55
Run Django shell in IPython
5
Django shell_plus: How to access Jupyter notebook in Docker Container
17
Embed an interactive Bokeh in django views
0
How can I execute Python Django runserver command in Jupyter Notebook?
1
Jupyter notebook with Django and Python 3
-1
How do I create a Django project using Jupyter?
0
How to setup django shell kernel for jupyter notebook running in separate docker containers

281
Inserting image into IPython notebook markdown
317
How to write LaTeX in IPython Notebook?
257
Change IPython/Jupyter notebook working directory
894
How to make IPython notebook matplotlib plot inline
444
How do I increase the cell width of the Jupyter/ipython notebook in my browser?
346
How do I add python3 kernel to jupyter (IPython)
479
Conda environments not showing up in Jupyter Notebook
233
Jupyter Notebook not saving: '_xsrf' argument missing from post
1
How do I execute a Jupyter notebook from an IPython shell?