What are some examples of developer created memory leaks written in the 4D programming language?

By developer created memory leak, i am referring to a memory leak created by bad programming that could have been avoided with better programming.

When ran in a 32 bit application it should eventually crash once it attempts to allocate more than 2^32 bytes (4 GB) of memory. If on the Mac OS X platform, the bottom of the crash report beneath the VM Region Summary should show a memory value around 3.7 GB:

When ran in a 64 bit application the code will continue to raise the amount of memory allocated and will not plateau, in that situation the OS will eventually complain that it has ran out of memory: 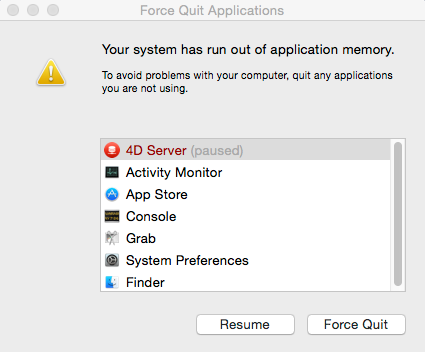 There are many ways that a developer can create there own memory leaks. Most of what you want to avoid is listed here.

The code snippet above will leak memory because each call to DOM CREATE XML REF will create a new reference to a memory location, while the developer of this code has neglected to include a call to free the memory. Running this in a loop in a 32 bit host application will eventually cause a crash.

This code can be easily fixed by calling DOM CLOSE XML when finished with the XML reference.

The code snippet above will leak memory because each time NEW LIST is called a reference to a new location in memory is returned. The developer is supposed to clear the the memory at the referenced location by using the CLEAR LIST($listRef) command. As a bonus, if the list has any sublists attached, the sublists can be cleared by passing the * parameter like CLEAR LIST($listRef;*).

This can be easily fixed by calling CLEAR LIST($listRef;*) as seen in the following fixed example:

Not the answer you're looking for? Browse other questions tagged memory-leaks out-of-memory 4d-database or ask your own question.

1270
Strange out of memory issue while loading an image to a Bitmap object
27
Do Small Memory Leaks Matter Anymore?
1143
Activity has leaked window that was originally added
3182
How to create a memory leak in Java?
1254
performSelector may cause a leak because its selector is unknown
1
How to find memory leaks of a process?
3
How to keep track of how much memory is leaked?
10
MPI memory leak
10
Windows 7 cleans up C++ memory leaks?
0
The concept of Memory Leaks