I installed visual studio 14.0 yesterday and there were some problem before installation itself although I installed it and when I opened it it showed a dll file missing so I downloaded it and after that it showed component missing so I went to devenev(I don't know what is it I did it according to an early question on stack overflow )and I make it run as administrator and it came but it isn't working.

It showed a white colour.please help. I am using Windows 7 32 bit

Try from your white screen: Press: Alt+T for Tools, then O for Options and untick the following boxes as shown, click OK and reopen Visual Studio. 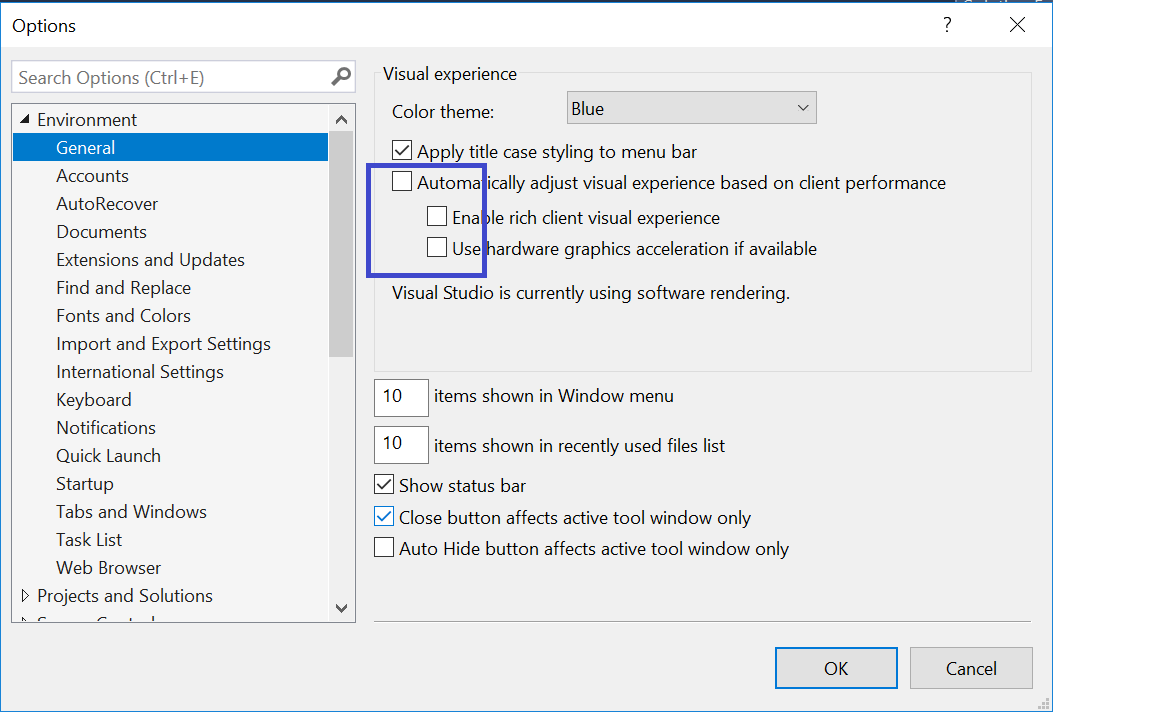 I had a similar issue today. When opening up VS 2017, i was presented with the normal black VS 2017 splash screen and after that closed, it opened a blank white screen.

After trying Tim and portogas's methods from the other answers posted, i still had the problem. I spoke with Microsoft who said i had a corrupt install, so went through the pain of uninstalling and re-installing VS2017 to find out i still had the same issue!

I also noticed i had developed this problem for VS2015 also which i thought was strange.

After opening VS2017 one more time and moving my mouse over the blank screen, i noticed that i could see the mouse cursor change at certain points and when hovering over the top right corner, a popover would appear saying "Close".

I opened device manager and noticed that my NVIDIA driver had an issue, so i reinstalled the drivers and updated the Intel HD Graphics 530 graphics driver whilst i was at it.

Same issue with white screen. I then disabled the Intel driver, and opened VS again, and it worked!

After some more playing about, i re-enabled the Intel driver and opened the NVIDIA control panel, changed the 3D settings from Auto-Select to the High-performance NVIDIA processor and all now appears to be working well!

If that doesn't work you should complete a full uninstall.

If the uninstall doesn't work please try the fixit link from microsoft.com

If the fixit link from Microsoft doesnt work you can use the manual uninstall instructions found on msdn.

Also make sure your system meets the minimum system requirements and you should review the compatibility page:

I had the same problem. I solved this one by doing the following:

After resetting all settings I could open Visual Studio 2017 normally again.

But after that you need to login to get the full license instead of the trial one.

It worked for me:

Not the answer you're looking for? Browse other questions tagged visual-studio-2015 devenv or ask your own question.