What does it mean to squash commits in git?

What does Squashing commits in git mean. How do I squash commits in Github?

I'm new to Git and I requested to be assigned to a newcomer bug in coala-analyzer. I fixed the bug, and now I was asked to squash my commits. How do I do it?

You can think of Git as an advanced database of snapshots of your working directory(ies).

One very nice feature of Git is the ability to rewrite the history of commits.
The principal reason for doing this is that a lot of such history is relevant only for the developer who generated it, so it must be simplified, or made more nice, before submitting it to a shared repository.

Squashing a commit means, from an idiomatic point of view, to move the changes introduced in said commit into its parent so that you end up with one commit instead of two (or more).
If you repeat this process multiple times, you can reduce n commit to a single one.

Visually, if you started your work at the commit tagged Start, you want this 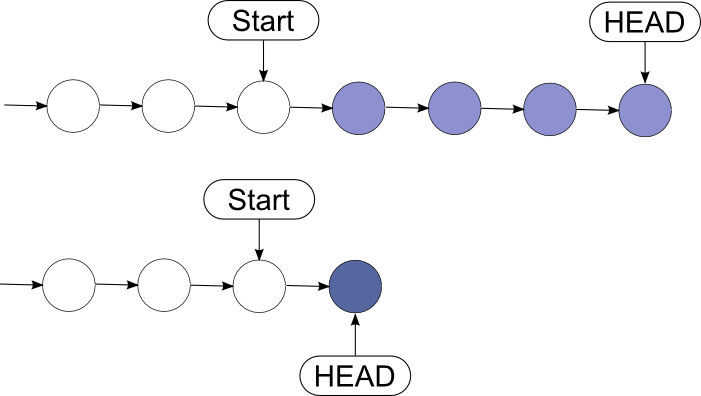 You may notice that the new commit has a slightly darker shade of blue. This is intentional.

In Git squashing is achieved with a Rebase, of a special form called Interactive Rebase.
Simplifying when you rebase a set of commits into a branch B, you apply all the changes introduced by those commits as they were done, starting from B instead of their original ancestor. 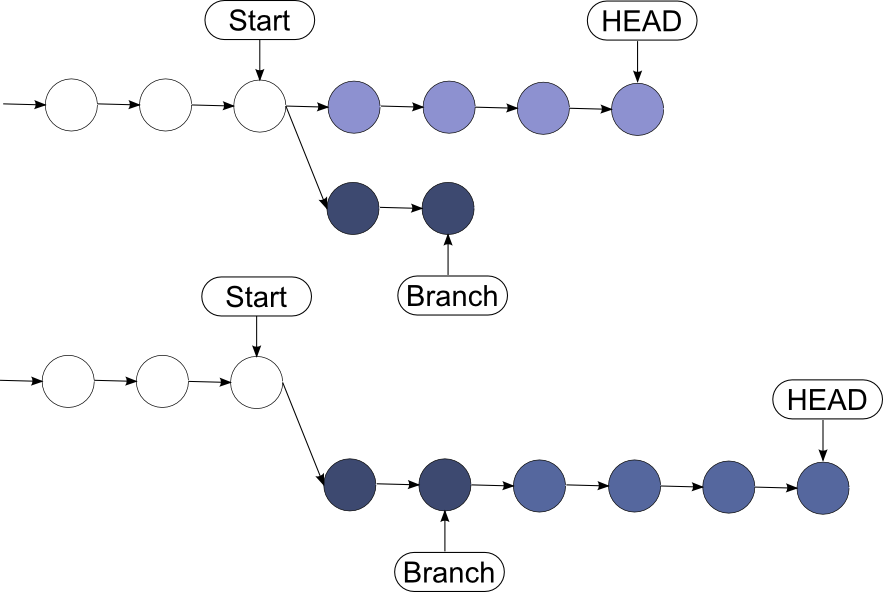 An interactive rebase let you choose how commits should be rebased. If you run this command:

I didn't name the commits, but these four ones are intended to be the commits from Start to Head

The nice thing about this list is that it is editable.
You can omit commits, or you can squash them.
All you have to do is to change the first word to squash.

If you close the editor and no merge conflicts are found, you end up with this history: 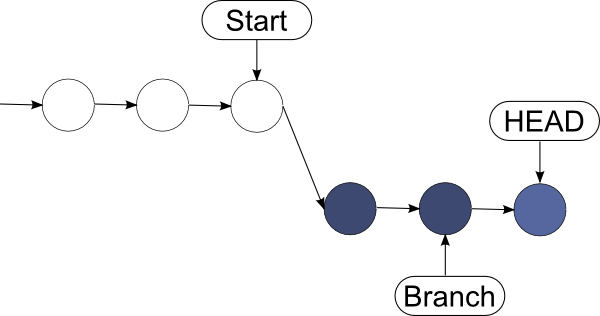 In your case, you don't want to rebase into another branch, but rather into a previous commit.
In order to transform the history as shown in the very first example, you have to run something like

change the "commands" to squash for all the commits apart from the first one, and then close your editor.

In Git, commits are never edited. They can be pruned, made not reachable, cloned but not changed.
When you rebase, you are actually creating new commits.
The old ones are not longer reachable by any refs, so are not shown in the history but they are still there!

This is what you actually get for a rebase:

If you have already pushed them somewhere, rewriting the history will actually make a branch!

The rebase command has some awesome options available in its --interactive (or -i) mode, and one of the most widely used is the ability to squash commits. What this does is take smaller commits and combine them into larger ones, which could be useful if you’re wrapping up the day’s work or if you just want to package your changes differently. We’re going to go over how you can do this easily.

A word of caution: Only do this on commits that haven’t been pushed an external repository. If others have based work off of the commits that you’re going to delete, plenty of conflicts can occur. Just don’t rewrite your history if it’s been shared with others.

So let’s say you’ve just made a few small commits, and you want to make one larger commit out of them. Our repository’s history currently looks like this:

The last 4 commits would be much happier if they were wrapped up together, so let’s do just that through interactive rebasing:

So, a few things have happened here. First of all, I told Git that I wanted to rebase using the last four commits from where the HEAD is with HEAD~4. Git has now put me into an editor with the above text in it, and a little explanation of what can be done. You have plenty of options available to you from this screen, but right now we’re just going to squash everything into one commit. So, changing the first four lines of the file to this will do the trick:

Basically this tells Git to combine all four commits into the the first commit in the list. Once this is done and saved, another editor pops up with the following:

Since we’re combining so many commits, Git allows you to modify the new commit’s message based on the rest of the commits involved in the process. Edit the message as you see fit, then save and quit. Once that’s done, your commits have been successfully squashed!

And if we look at the history again…

So, this has been a relatively painless so far. If you run into conflicts during the rebase, they’re usually quite easy to resolve and Git leads you through as much as possible. The basics of this is fix the conflict in question, git add the file, and then git rebase --continue will resume the process. Of course, doing a git rebase --abort will bring you back to your previous state if you want. If for some reason you’ve lost a commit in the rebase, you can use the reflog to get it back.

Details can be found this link.

It means combining several commits into one. Have a look at :

4465
Squash my last X commits together using Git
282
How does git store files?
1
What is the difference between `git rebase -i HEAD~N` and `git reset --soft HEAD~N`?
0
Squashing latest commits into last merge commit
0
How to remove footprint of GitHub issue references when changes added into last commit
0
Remove file commited in old commit