Using Fiddler to send a POST request to WebApi

I'm writing a simple WebApi program, using C#. (I know MVC fairly well, but I'm new to WebApi.) It contains a Vendors controller (VendorsController.cs), which contains a "getvendor" action as shown in the code sample below:

The routes are configured as follows:

I'm using Fiddler to test the program. First, I ran the above code without [FromBody] and used Fiddler to send a POST request with the username in the url like this: http://localhost:60060/api/vendors/getvendor?username=tapuser

This worked fine. tapuser was passed as the argument to GetVendor and the action returned the expected result.

Next, I added [FromBody] and put username=tapuser in the request body. This time, when I sent the request, tapuser did not get passed to the action. The argument to GetVendor() was null. I've tried variations on the request body such as { "username": "tapuser" }, but it doesn't help. I've tried changing the route in various ways, too, such as changing routeTemplate to "api/{controller}/{action}/{id}". That hasn't helped either. I'm sure I'm missing something very simple, but I just don't see it.

Try putting your value directly into the request body. See this. 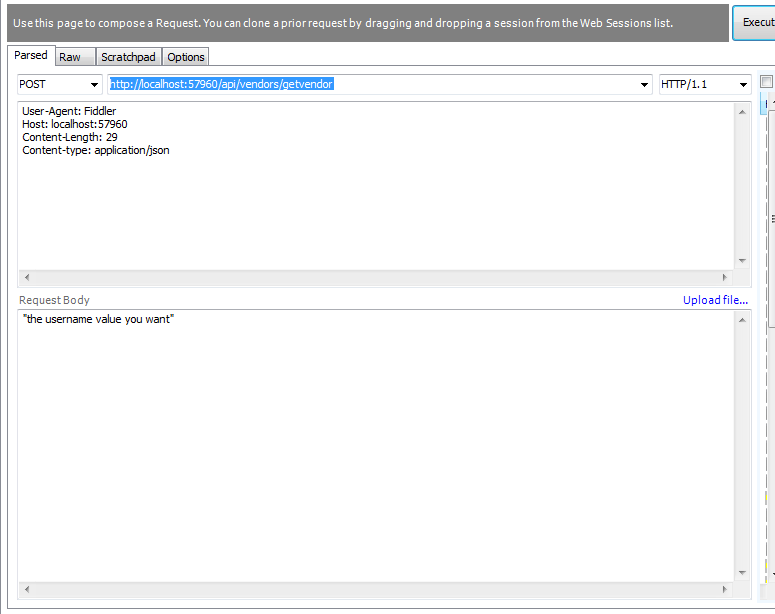 Now I did some debugging and was able to recreate the issue you were having.

I was eventually able to get the data to the action by doing the following:

First I created a class to act as container for the payload.

and updated the action to match

Then using fiddler I composted the request to the endpoint to test.

When my break point was hit the body/payload was populated with the username as tapuser.

Now while the above worked, I wasn't entirely sure that it solved your problem so I did some googling and came across this

Where that showed the following example using [FromBody]

To force Web API to read a simple type from the request body, add the [FromBody] attribute to the parameter:

In this example, Web API will use a media-type formatter to read the value of name from the request body. Here is an example client request.

When a parameter has [FromBody], Web API uses the Content-Type header to select a formatter. In this example, the content type is "application/json" and the request body is a raw JSON string (not a JSON object).

At most one parameter is allowed to read from the message body. So this will not work:

The reason for this rule is that the request body might be stored in a non-buffered stream that can only be read once.

When I reverted my original changes and followed the example it worked as intended.

I found out that if I put 'tapuser' in the request body, using either single or double quotes, it works. The quotes seem to be the answer. If I put anything other than tapuser inside the quotes, the whole thing gets passed as the argument. For instance, '{username=tapuser}' will get passed as {username=tapuser}. Thanks everybody for your input.

Not the answer you're looking for? Browse other questions tagged c# rest asp.net-web-api asp.net-mvc-5 or ask your own question.

2298
Should 'using' directives be inside or outside the namespace?
5984
What is the difference between POST and PUT in HTTP?
2721
HTTP GET with request body
1146
HTTP response code for POST when resource already exists
1375
How to make an HTTP POST web request
3495
How do I POST JSON data with cURL?
1220
How do I get ASP.NET Web API to return JSON instead of XML using Chrome?
995
How do you set the Content-Type header for an HttpClient request?
150
Web API Put Request generates an Http 405 Method Not Allowed error
2
C# Webapi POST request fails - 404 NOT FOUND