How does the Import Library work? Details?

I know this may seem quite basic to geeks. But I want to make it crystal clear.

When I want to use a Win32 DLL, usually I just call the APIs like LoadLibrary() and GetProcAdderss(). But recently, I am developing with DirectX9, and I need to add d3d9.lib, d3dx9.lib, etc files.

I have heard enough that LIB is for static linking and DLL is for dynamic linking.

But sometimes, there're some LIB files coming with the DLL files, so:

After checking wikipedia, I remember that these LIB files are called import library. But I am wondering how it works with my main application and the DLLs to be dynamically loaded.

Just as RBerteig said, there're some stub code in the LIB files born with the DLLs. So the calling sequence should be like this:

My main application --> stub in the LIB --> real target DLL

So what information should be contained in these LIBs? I could think of the following:

Am I right on this? Is there something more?

BTW: Is there any tool that can inspect an import library? If I can see it, there'll be no more doubts.

Linking to a DLL file can occur implicitly at compile link time, or explicitly at run time. Either way, the DLL ends up loaded into the processes memory space, and all of its exported entry points are available to the application.

If used explicitly at run time, you use LoadLibrary() and GetProcAddress() to manually load the DLL and get pointers to the functions you need to call.

If linked implicitly when the program is built, then stubs for each DLL export used by the program get linked in to the program from an import library, and those stubs get updated as the EXE and the DLL are loaded when the process launches. (Yes, I've simplified more than a little here...)

Those stubs need to come from somewhere, and in the Microsoft tool chain they come from a special form of .LIB file called an import library. The required .LIB is usually built at the same time as the DLL, and contains a stub for each function exported from the DLL.

Confusingly, a static version of the same library would also be shipped as a .LIB file. There is no trivial way to tell them apart, except that LIBs that are import libraries for DLLs will usually be smaller (often much smaller) than the matching static LIB would be.

If you use the GCC toolchain, incidentally, you don't actually need import libraries to match your DLLs. The version of the Gnu linker ported to Windows understands DLLs directly, and can synthesize most any required stubs on the fly.

If you just can't resist knowing where all the nuts and bolts really are and what is really going on, there is always something at MSDN to help. Matt Pietrek's article An In-Depth Look into the Win32 Portable Executable File Format is a very complete overview of the format of the EXE file and how it gets loaded and run. Its even been updated to cover .NET and more since it originally appeared in MSDN Magazine ca. 2002.

Also, it can be helpful to know how to learn exactly what DLLs are used by a program. The tool for that is Dependency Walker, aka depends.exe. A version of it is included with Visual Studio, but the latest version is available from its author at http://www.dependencywalker.com/. It can identify all of the DLLs that were specified at link time (both early load and delay load) and it can also run the program and watch for any additional DLLs it loads at run time.

I've reworded some of the earlier text to clarify it on re-reading, and to use the terms of art implicit and explicit linking for consistency with MSDN.

So, we have three ways that library functions might be made available to be used by a program. The obvious follow up question is then: "How to I choose which way?"

Static linking is how the bulk of the program itself is linked. All of your object files are listed, and get collected together in to the EXE file by the linker. Along the way, the linker takes care of minor chores like fixing up references to global symbols so that your modules can call each other's functions. Libraries can also be statically linked. The object files that make up the library are collected together by a librarian in a .LIB file which the linker searches for modules containing symbols that are needed. One effect of static linking is that only those modules from the library that are used by the program are linked to it; other modules are ignored. For instance, the traditional C math library includes many trigonometry functions. But if you link against it and use cos(), you don't end up with a copy of the code for sin() or tan() unless you also called those functions. For large libraries with a rich set of features, this selective inclusion of modules is important. On many platforms such as embedded systems, the total size of code available for use in the library can be large compared to the space available to store an executable in the device. Without selective inclusion, it would be harder to manage the details of building programs for those platforms.

However, having a copy of the same library in every program running creates a burden on a system that normally runs lots of processes. With the right kind of virtual memory system, pages of memory that have identical content need only exist once in the system, but can be used by many processes. This creates a benefit for increasing the chances that the pages containing code are likely to be identical to some page in as many other running processes as possible. But, if programs statically link to the runtime library, then each has a different mix of functions each laid out in that processes memory map at different locations, and there aren't many sharable code pages unless it is a program that all by itself is run in more than process. So the idea of a DLL gained another, major, advantage.

A DLL for a library contains all of its functions, ready for use by any client program. If many programs load that DLL, they can all share its code pages. Everybody wins. (Well, until you update a DLL with new version, but that isn't part of this story. Google DLL Hell for that side of the tale.)

So the first big choice to make when planning a new project is between dynamic and static linkage. With static linkage, you have fewer files to install, and you are immune from third parties updating a DLL you use. However, your program is larger, and it isn't quite as good citizen of the Windows ecosystem. With dynamic linkage, you have more files to install, you might have issues with a third party updating a DLL you use, but you are generally being friendlier to other processes on the system.

A big advantage of a DLL is that it can be loaded and used without recompiling or even relinking the main program. This can allow a third party library provider (think Microsoft and the C runtime, for example) to fix a bug in their library and distribute it. Once an end user installs the updated DLL, they immediately get the benefit of that bug fix in all programs that use that DLL. (Unless it breaks things. See DLL Hell.)

The other advantage comes from the distinction between implicit and explicit loading. If you go to the extra effort of explicit loading, then the DLL might not even have existed when the program was written and published. This allows for extension mechanisms that can discover and load plugins, for instance.

These .LIB import library files are used in the following project property, Linker->Input->Additional Dependencies, when building a bunch of dll's that need additional information at link time which is supplied by the import library .LIB files. In the example below to not get linker errors I need to reference to dll's A,B,C, and D through their lib files. (note for the linker to find these files you may need to include their deployment path in Linker->General->Additional Library Directories else you will get a build error about being unable to find any of the provided lib files.) 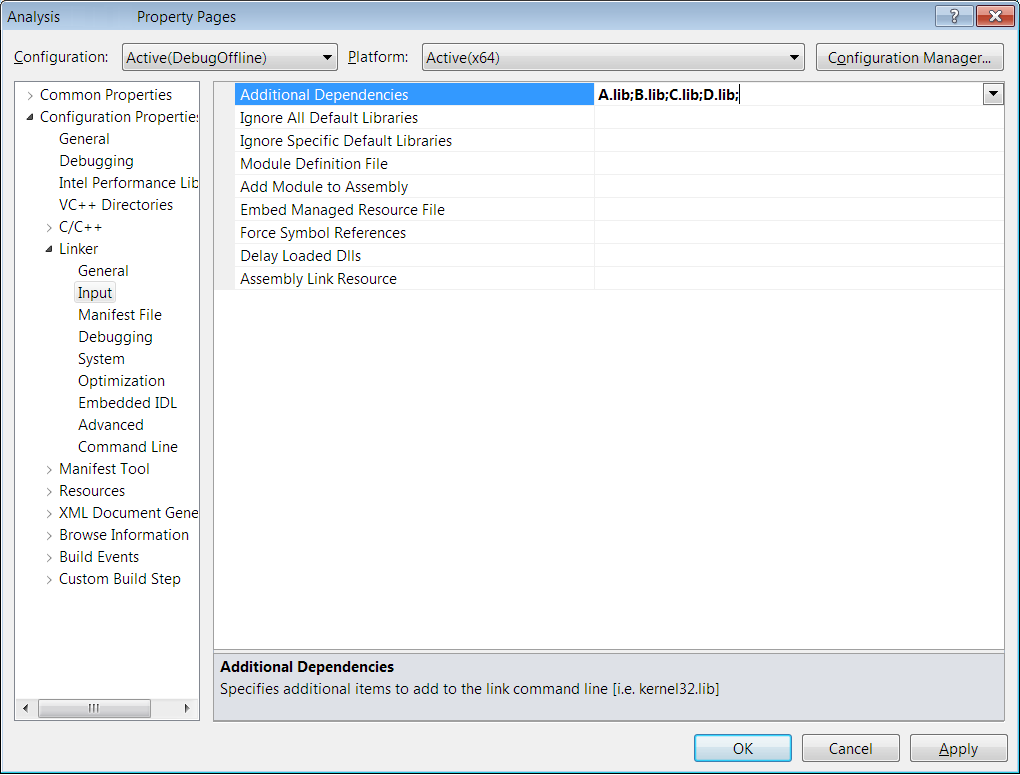 If your solution is building all dynamic libraries you may have been able to avoid this explicit dependency specification by relying instead on the reference flags exposed under the Common Properties->Framework and References dialog. These flags appear to automatically do the linking on your behalf using the *.lib files. 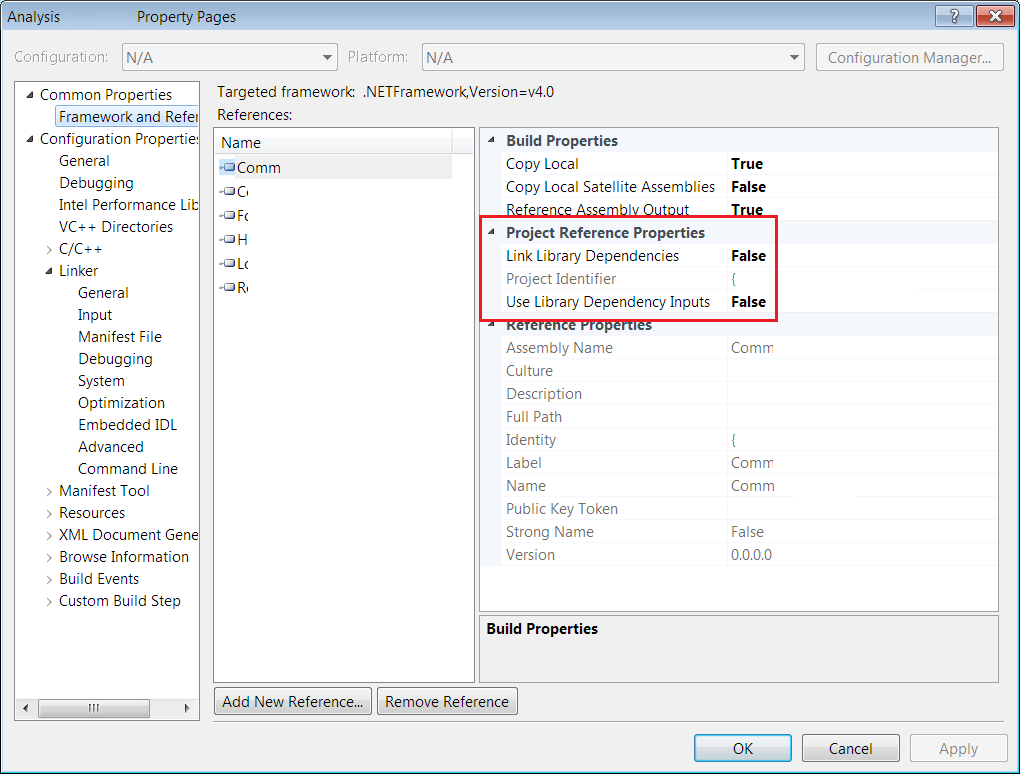 This however is as it says a Common Properties, which is not configuration or platform specific. If you need to support a mixed build scenario as in our application we had a build configuration to render a static build and a special configuration that built a constrained build of a subset of assemblies that were deployed as dynamic libraries. I had used the Use Library Dependency Inputs and Link Library Dependencies flags set to true under various cases to get things to build and later realizing to simplify things but when introducing my code to the static builds I introduced a ton of linker warnings and the build was incredibly slow for the static builds. I wound up introducing a bunch of these sort of warnings...

And I wound up using the manual specification of Additional Dependencies to satisfy the linker for the dynamic builds while keeping the static builders happy by not using a common property that slowed them down. When I deploy the dynamic subset build I only deploy the dll files as these lib files are only used at link time, not at runtime.

There are three kinds of libraries: static, shared and dynamically loaded libraries.

The static libraries are linked with the code at the linking phase, so they are actually in the executable, unlike the shared library, which has only stubs (symbols) to look for in the shared library file, which is loaded at run time before the main function gets called.

The dynamically loaded ones are much like the shared libraries, except they are loaded when and if the need arises by the code you've written.

Here are some related MSDN topics to answer my question:

Linking an Executable to a DLL

Determining Which Linking Method to Use

Not the answer you're looking for? Browse other questions tagged c++ c windows visual-c++ or ask your own question.

8
What is usefulness of .lib file generated while compiling the dll projects, can i use it for static linking?
-1
How import libraries work exactly?
444
When to use dynamic vs. static libraries
62
What's the differences between .dll , .lib, .h files?
55
know if .lib is static or import
8
Where do I input DLL dependencies in Visual Studio C++ project?
13
How do import libraries work and why doesn't MinGW need them?
4
Static linking to lib and still requesting DLL
5
.h, .dll and .lib confusion
9
b2 vs bjam for building Boost library
See more linked questions