Unsupported Configuration: This file is set to build for a version older than the deployment target. Functionality may be limited

Can anyone explain this warning?

Unsupported Configuration: This file is set to build for a version older than the deployment target. Functionality may be limited.

When my app was initially written a storyboard I tried was not supported. This made it necessary to manage multiple views entirely from code i.e. without using XIB files. So my app basically uses a MultiviewAppDelegate to switch between multiple views using a MultiviewViewController.

It was written initially under iOS 5 and now runs on the Simulator (9.2) using an iPhone 6 Plus running iOS 9.

OrdoDei helped me address a similar problem related to unused XIB files. My particular issue could be addressed if my app used storyboards. Most other problems with this particular warning seem to be related to networking which my app doesn't use.

Has anyone else had to deal with a similar issue?

Open the affected XIB files and ensure that the "Builds for" setting is set to your minimum deployment target and/or above. 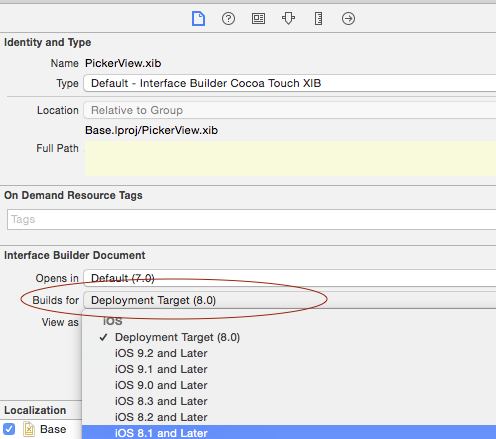 Shripada's answer is correct. However, if it's still not working as Alyoshak reported, then as per this thread and my experience, you need to restart Xcode.

This was experienced with the most current version of Xcode at the time (8.3.3)

If changing the minimum build target version nor restarting does not work for you, try inspecting the XIB source file. Right click on the file → Open As → Source Code.

Look for the <dependencies> element near the top, which looks like this:

My target build was iOS 9 but the aspect ratio constraint had minToolsVersion at 5.1. When I changed it to 9.0 the warning went away.

Not the answer you're looking for? Browse other questions tagged ios objective-c xib or ask your own question.

20
iOS 9 Warnings in Xcode - This file is set to build for a version older than the project deployment. Functionality may be limited

136
Xcode changes unmodified storyboard and XIB files
1
Crashing application on ios7 with DT set to iOS5 ( UIKeyAutomaticallyAdjustsScrollViewInsets -is not an integer number)
3
warning: Attribute Unavailable: Minimum Font Scale on iOS versions prior to 6.0
308
UIImageView missing images in Launch Screen on device
174
Error message '_BSMachError: (os/kern) invalid capability (20)'
86
Xcode 8 build crash on iOS 9.2 and below
0
How to convert Xib based project to Storyboard with auto layout
3
iOS 10: Fatal Exception: NSInternalInconsistencyException Could not load NIB in bundle
312
The iOS Simulator deployment targets is set to 7.0, but the range of supported deployment target version for this platform is 8.0 to 12.1