I just read the NetworkX implementation of Dijkstra's algorithm for shortest paths using bidirectional search (at this). What is the termination point of this method?

I'm going to base this on networkx's implementation.

Bidirectional Dijkstra stops when it encounters the same node in both directions - but the path it returns at that point might not be through that node. It's doing additional calculations to track the best candidate for the shortest path.

For reference, here's the graph: 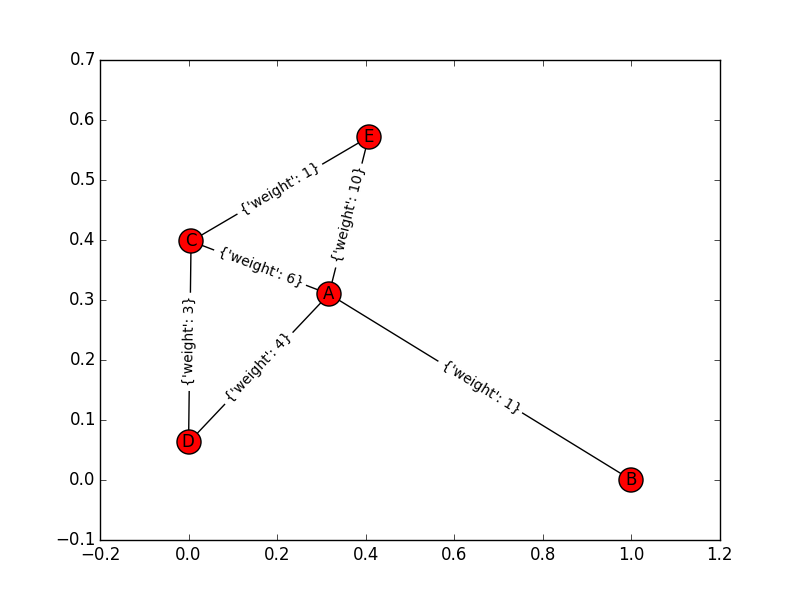 The algorithm starts with two empty clusters, each associated with A or E

and it will build up "clusters" around each. It first puts A into the cluster associated with A

Now it checks if A is already in the cluster around E (which is currently empty). It is not. Next, it looks at each neighbor of A and checks if they are in the cluster around E. They are not. It then places all of those neighbours into a heap (like an ordered list) of upcoming neighbors of A ordered by pathlength from A. Call this the 'fringe' of A

Back to E: we add C tot he cluster of E and check whether any neighbor of C is in the cluster of A. What do you know, there's A. So we have a candidate shortest path A-C-E, with distance 7. We'll hold on to that. We add D to add to fringe of E (with distance 4, since it's 1+3). We have:

Back to A: We get the next thing from its fringe, D. We add it to the cluster about A, and note that its neighbor C is in the cluster about E. So we have a new candidate path, A-D-C-E, but it's length is greater than 7 so we discard it.

Now we go back to E. We look at D. It's in the cluster around A. We can be sure that any future candidate path we would encounter will have length at least as large as the A-D-C-E path we have just traced out (this claim isn't necessarily obvious, but it is the key to this approach). So we can stop. We return the candidate path found earlier.

Not the answer you're looking for? Browse other questions tagged python algorithm graph networkx shortest-path or ask your own question.

25
Termination Criteria for Bidirectional Search
8
Is there any implementation of bidirectional search for Dijkstra algorithm?

554
What algorithms compute directions from point A to point B on a map?
1191
Easy interview question got harder: given numbers 1..100, find the missing number(s) given exactly k are missing
21
Bidirectional A* (A-star) Search
119
Negative weights using Dijkstra's Algorithm
1150
Ukkonen's suffix tree algorithm in plain English
1738
Image Processing: Algorithm Improvement for 'Coca-Cola Can' Recognition
142
Why doesn't Dijkstra's algorithm work for negative weight edges?
1965
What is the optimal algorithm for the game 2048?
2
Source algorithm for networkx shortest_path(G[, source, target, weight]) function