How to use vector drawables with View besides ImageView with srcCompat?

app:srcCompat with ImageView allows for backward compatible use of vector drawables. But how can you use them with other Views besides ImageView? For example, the TextView attributes like android:drawableLeft.

Also using the vector drawable as an android:icon with MenuItem caused a crash with the following exception:

With Support Library 23.2.0, how can this issue be addressed?

For AppCompat version 23.3.0 where no work solution via selector XML (razzledazzle's accepted answer) we can do this by programmatically:

This code is equivalent for this selector xml:

If the vector drawable is not shown using API 23, you'll need to convert the VectorDrawable to a regular Drawable first. If you want to use setCompoundDrawablesWithIntrinsicBounds you'll need to do this, but for StateListDrawable I didn't need to.

Update 2: They have added an option to enable it again in Support Library 23.4.0:

For AppCompat users, we’ve added an opt-in API to re-enable support Vector Drawables from resources (the behavior found in 23.2) via AppCompatDelegate.setCompatVectorFromResourcesEnabled() - keep in mind that this still can cause issues with memory usage and problems updating Configuration instances, hence why it is disabled by default.

Update: This no longer works starting from version 23.3.0

For AppCompat users, we’ve decided to remove the functionality which let you use vector drawables from resources on pre-Lollipop devices due to issues found in the implementation in version 23.2.0/23.2.1 [https://code.google.com/p/android/issues/detail?id=205236, https://code.google.com/p/android/issues/detail?id=204708]. Using app:srcCompat and setImageResource() continues to work.

Using AppCompat and app:srcCompat is the most foolproof method of integrating vector drawables into your app.

That quote is from the official blogpost for the release of version 23.2.0 of the Support Library.

This translates to the steps below:

Create or import a vector resource which you require for the app. For example, one can create a vector drawable for the search icon and name it ic_action_search_vector.xml

Create another proxy drawable resource for the vector drawable previously created. Say, for the previous ic_action_search_vector.xml, ic_action_search.xml can be created as a simple StateListDrawable which could contain the lines below:

This step can be skipped if you have referenced the vector drawable from another drawable resource which you will use with your View.

This is the solution to that problem!

Vector drawables can be used pre-Lollipop in other places than app:srcCompat, but it comes with a price. 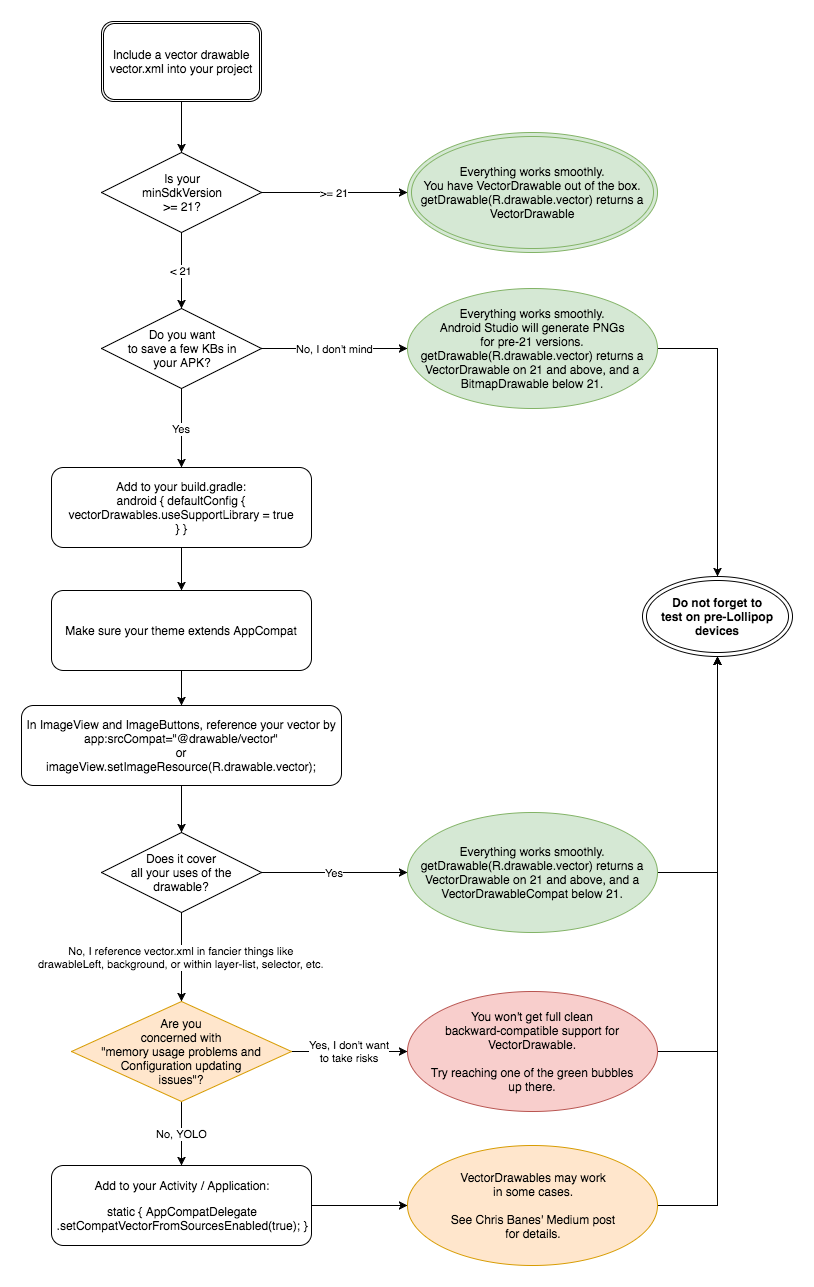 i. If TextView is inside Activity:

ii. If TextView is inside Fragment:

For more information on VectorDrawableCompat Refer this link

This is not true if you include in your gradle vectorDrawables.useSupportLibrary = true

either set to false or remove the line completely and all your vectors will work as they were. But for olders versions of android they will be able to rely on the converted PNG

Form android studio 3.0.0 android:src is not support vector image and below 21 my get exception. use app:srcCompat for vector image. Keep all vector image files inside the drawable folder.

And in application class define this:

Now you can use your .xml file. Don't forget to user this link: xmlns:app="http://schemas.android.com/apk/res-auto"

Now you can use app:srcCompat="@drawable/ic_cart_notify" but if you try to use in android:background or android:drawableLeft then you got "Error inflating" exception. For that create a new wrapped drawable .xml file, ic_cart_notify is vector icon.

Dadou is right. So if you would like use selector for view with VectorDrawables you need to add:

to every Activity where you want to use VectorDrawables on devices with versions below Android 5.

set vector drawable to side drawable in textview in android

Include this in your gradle file

In your text view you can use

I'm using new support library and all I have to do is:

Now Where ever you are using like fragment, activity or adapter use this as the first line in your class

after that use like as we do before, something.xml

or if you have drawable id needed to be set dynamically

Not the answer you're looking for? Browse other questions tagged android android-support-library android-vectordrawable or ask your own question.

65
How to set VectorDrawable as an image for ImageView programmatically
88
VectorDrawable - is it available somehow for pre-Lollipop versions of Android?
69
Android Selector Drawable with VectorDrawables srcCompat

994
How to convert a Drawable to a Bitmap?
0
setting Dropdown mode on an extended Spinner view
2
Unable to create a radial gradient
0
nav_header_main in android studio
1
Android Studio 2.1 using Navigation Drawer Activity error
1
App crashes when adding an ImageView?
3
How to fix “Error inflating class android.support.design.widget.NavigationView”