How to print argv arguments from main function in C?

So I just learnt that we can give two arguments into main function namely "argc" and "argv. However I am not able to understand what argv is in this: int main(int argc, char* argv[]);

Is argv an array of characters? or is it an array of pointers pointing to characters? Either way I am looking for a way to print out the arguments that the user passes to this program. This is the code the I wrote, but it's not printing the argv's so to speak. What's wrong in it? I guess it's my understanding of argv that's making this code incorrect.

After the suggestions that I got from answers, I corrected my code as follows.

And I am using Ubuntu Linux in VMWare on my windows 8.1 pc. This is the output that I am getting. It's just printing argc and after that nothing. What's the problem? Is it the way I am compiling it or something in Linux terminal? 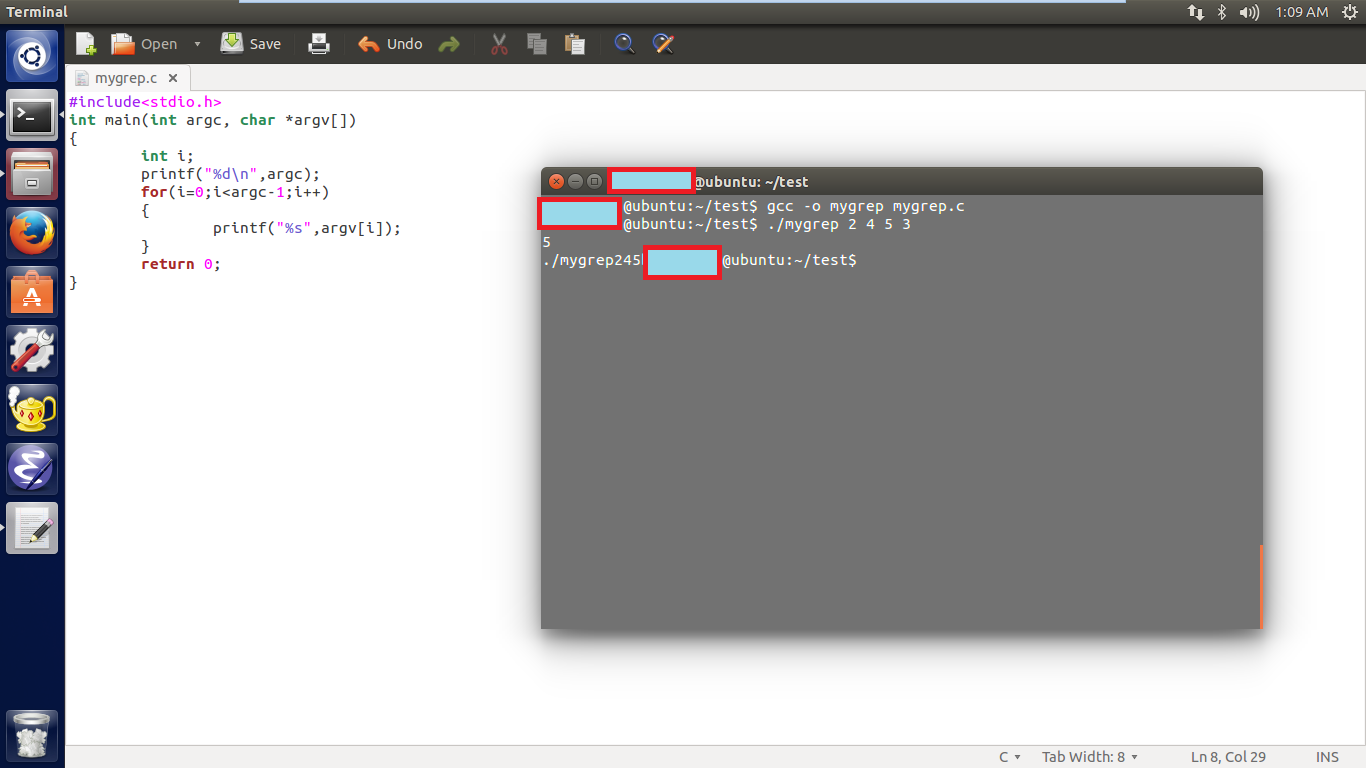 In the above figure, I want the numbers 2,4,5,3 to be printed again, but they are not getting printed.

Let's explain out things step by step. First of all, when you invoke your program by calling something like...

You're passing it a series of three arguments, right? And each argument is a string, right? Now, the main function, can have one of two prototypes, as specified by the C standard...

The idea is that main is able to handle the arguments that you provided. argc provides the number of arguments. If you noticed, while passing three arguments, argc is 4! This happens because a first argument is passed before all others, ./my-program, and lets your program recognize itself.

Now, the C standard allows you to write any "compatible" prototype for main. For instance, you can write any of these...

You don't need to understand what they all mean now, just that argv is an array of strings, and that you should never modify strings as the original main prototype appears to trust you onto. Now, knowing that arguments start at argv[1], your code...

Means: "Print the first character of the ith element of argv". Why would this be wrong? First of all, you're printing a char, and telling printf that it is a string. This has undefined behavior. Then, you're iterating over the first ith elements of argv. This means that the first, "non-argument" element will be included in the mix, and the last argument won't be. To solve it, write somethinge like...

Means: "Print the ith element of argv onto stdout.

You need to change

char *argv[] is pointer to pointer to char because arrays in function arguments are automatically converted to pointer pointing at elements of the array.

You invoked undefined behavior by passing data having wrong type to printf(): %s expects char*, but you passed char (converted to int for variable number arguments).

Also you may want i<argc instead of i<argc-1. Why not print the last argument?

In your edited question you have fixed your main problem. Now notice that your prompt looks like

Here ./mygrep245 is your output after you printed "5\n". You forgot to print line feeds, thus all the output and the subsequent shell output has been concatenated as it is. And the last argument 3 wasn't printed because you put i<argc-1 instead of i<argc or i<=argc-1 in your loop condition.

So to sum it up, you can do this with a simple while loop, using only argv:

You can refer the document:

As you can see, main now has arguments. The name of the variable argc stands for "argument count"; argc contains the number of arguments passed to the program. The name of the variable argv stands for "argument vector". A vector is a one-dimensional array, and argv is a one-dimensional array of strings. Each string is one of the arguments that was passed to the program.

If you need to print it simply remove the * and try this:

argv is an array of c-strings (where each c-string is a pointer to characters). Consider the following command line:

As others mentioned, remove the * from printf("%s", *argv[i]); and fix your loop condition if you want to print all arguments

0
How to make a print.exe which you can access through the cmd and takes parameters in c

1432
How do function pointers in C work?
84
Is it possible to iterate over arguments in variadic macros?
488
How can one print a size_t variable portably using the printf family?
680
How to write a bash script that takes optional input arguments?
1
int main(int argc, const char * argv[]) AND file input
2
Reading string character by character in C
0
c++ how does compiler get the length of argv strings