I'm making simple game manager. I have a script, which will be accessible from all scenes in the game. And I need to check values of its variables after loading new scene. But my code runs only once after starting the simulation while an object with this script exists in all scenes. What is wrong? Why doesn't it work after loading a new scene?

In every Unity project you must have A PRELOAD SCENE.

It is quite confusing that Unity does not have a preload scene "built-in".

They will add this concept in the future.

Fort now you have to click to add a preload scene yourself.

This is the SINGLE GREATEST MISUNDERSTANDING for new programmers trying Unity!

Fortunately, it is extremely easy to have a preload scene.

Make a scene named "preload". It must be scene 0 in Build Manager.

This is the only place in the whole project you use DontDestroyOnLoad. 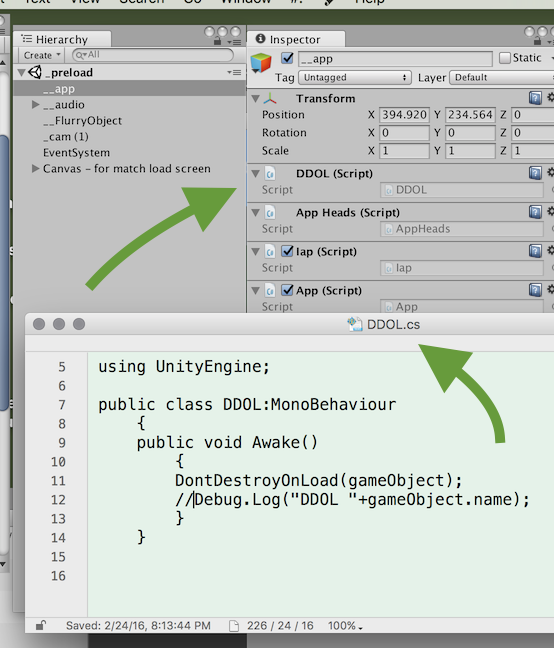 In the example: the developers have made a one-line DDOL script.

Put that script on the "__app" object.

You never have to think about DDOL again.

Your app will have (many) "general behaviors". So, things like database connectivity, sound effects, scoring, and so on.

You must, and can only, put your general behaviors on "_app".

It's really that simple.

The general behaviors are then - of course - available everywhere in the project, at all times, and in all scenes.

How else could you do it?

In the image example above, notice "Iap" ("in-app purchase") and the others.

All of your "generally-needed behaviors" - sound effects, scoring, and so on - are right there on that object.

This means that - of course, naturally -

...your general behaviors will have ordinary Inspectors, just like everything else in Unity.

You can use all the usual features of Unity, which you use on every other game object. Inspector variables, drag to connect, settings, and so on.

(Indeed: say you've been hired to work on an existing project. The first thing you will do, is glance at the preload scene. You will see all the "general behaviors" in the preload scene - sound effects, scoring, AI, etc etc. You will instantly see all the settings for those things as Inspector variables ... speech volume, playstore ID, etc etc.) 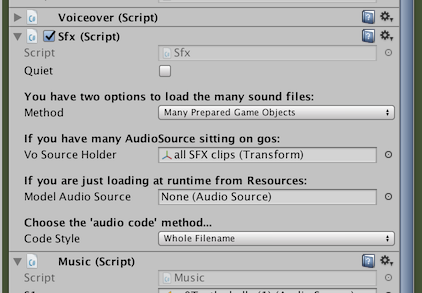 To repeat. Regarding your "general behaviors". (Sound effects, scoring, social, etc etc.) These CAN ONLY GO on a game object in the preload scene.

This is not optional: there's no alternative!

Sometimes engineers coming from other environments get caught up on this, because it seems like "it can't be that easy".

Important: Your app will certainly have "early" scenes. Examples:

The preload scene will then load your splash or menu or other early scene.

The central issue: "finding" those from other scripts:

So you have a preload scene.

All of your "general behaviors" are simply on the preload scene.

You next have the problem of, quite simply, finding say "SoundEffects".

You have to be able to find them easily, from, any script, on any game object, in any of your scenes.

Fortunately it is dead easy, it is one line of code.

Do that in Awake, for any script that needs it.

It's honestly that simple. That's all there is to it.

It really is that easy - honest!

It's bizarre that Unity forgot to add a built-in "preload scene" - somewhere to attach your systems like SoundEffects, GameManager, etc. It's just one of those weird thing about Unity. So, the first thing you do in any Unity project is just click once to make a preload scene.

Note that, if you really want to type even less (!) lines of code, it's remarkably easy - you can just use a global for each of these things!

This is explained in detail here , many folks now use something like this, a Grid.cs script ...

Then, anywhere in the project you can say

It's just that easy, that's the whole thing.

Don't forget that each of those "general systems" is on, and can only be on, the DDOL game object in the preload scene.

DylanB asks: "During development it's quite annoying that you have to click to the preload scene every time before you click "Play". Can this be automated?"

Sure, every team has a different way to do this. Here's a trivial example:

@Fattie: Thanks for elaborating all this, it's great! There is a point though that people are trying to get through to you, and I'll just give it a go as well:

We do not want every instantiation of everything in our mobile games to do a "FindObjectOfType" for each and every every "global class"!

Instead you can just have it use an Instantiation of a static / a Singleton right away, without looking for it!

And it's as simple as this: Write this in what class you want to access from anywhere, where XXXXX is the name of the class, for example "Sound"

Now instead of your example

Just simply use it, without looking, and no extra variables, simply like this, right off from anywhere:

Alternately (technically identical), just use one global class, usually called Grid, to "hold" each of those. Howto. So,

Here is how you can start whatever scene you like and be sure to reintegrate your _preload scene every time you hit play button in unity editor. There is new attribute available since Unity 2017 RuntimeInitializeOnLoadMethod, more about it here.

Basically you have a simple plane c# class and a static method with RuntimeInitializeOnLoadMethod on it. Now every time you start the game, this method will load the preload scene for you.

Then in your _preload scene you have another script who will load back desired scene (from where you have started):

An alternate solution from May 2019 without _preload:

I've paraphrased from the above blog to a how-to for it below:

Create a Main Prefab from an empty GameObject and place in the Resources folder.

Create a Main.cs C# script in your Assets > Scripts or wherever.

Add Main.cs to the Main Prefab in your Resources folder.

Attach any other scripts that need to be global across scenes to this prefab.

Note that if you link to other scene game objects to those scripts you probably want to use something like this in the Start function for those scripts:

Or better yet, use an Asset management system like Addressable Assets or the Asset Bundles.

the most simplest and standard way: create a prefab, according to unity docs:

Unity’s Prefab system allows you to create, configure, and store a GameObject complete with all its components, property values, and child GameObjects as a reusable Asset. The Prefab Asset acts as a template from which you can create new Prefab instances in the Scene.

and you can make it even better:

use prefab and namespaces together:

in your prefab script:

in your other scripts:

2
Object resetting after loading a scene for the second time in Unity
36
Unity singleton manager classes
48
Understanding scenes in Unity3d
11
Any reason not use use a singleton "variable" in Swift?
4
How to serialize and save a GameObject in Unity
3
Unity - GetComponent on Instantiated Object returning Null
2
Unity c# multiple functions share the same behavior?
1
How to load/get to/from scene variables via loadlevel with scenemanager in unity3d programmatically
1
Pass diverse parameters to a delegate
1
Duplicates because of DontDestroyOnLoad()
See more linked questions

820
Random number generator only generating one random number
1
WaitForSeconds() Coroutine causes Game to freeze Indefinitely (Edited)
1
Changing text programmatically to show score on game over screen in unity
0
Making instantiated objects permanent and making game objects... disappear forever in Unity
1
How should I reset all the object in fact the whole world to it's original state when restarting a new game?