Adding a New Column to an Existing Table in Entity Framework

I have added a new column to a table in my database. The table is already defined in the existing Entity Framework model. I've been through most of the items here on how to do this and it still fails.

A little background, this entity model has not been updated in at least 3 years. So aside from the column I'm adding I know there have been a number of other columns that have been added in that time, but never included. I took over the project about 9 months ago and have never been able to successfully update the model.

Any help or direction that could be provided would be greatly appreciated as I'm at a critical point and have to get the model updated.

The "Update Model from Database" is hard/slow to use and is prone to errors. It generates other stuff that you probably don't want/need. So manually adding the column that you need will work better. I suggest you do it outside the VS editor since depending on how many models/tables, it can be very slow opening the file in VS.

An addendum to the answer by alltej above, and answering Chris Walsh's reply that he is getting 'The conceptual side Member or Property 'xxxxx' specified as part of this MSL does not exist in MetadataWorkspace." on the new Scalar property line under '

You have to make sure that you search 'Add the property ' in TWO places within your .edmx file , otherwise you will get Chris's error

Figured out the problem. When I generated the model I was getting an Error 113:

Multiplicity is not valid in Role.

I didn't notice it among the other 16307 errors that were generated when the creation failed. Once I fixed that everything worked fine.

I just found this question when I had a situation where I added some columns to a table, and my edmx file would update just fine; however, the code generation was not triggering properly, so my .cs files were not updating. I right clicked on the Entities.tt file and selected "Run Custom Tool" which runs the text transformations, which fixed it for me.

I ran into this problem a while ago and was able to deal with it by removing the particular table from the model, then doing the "Update model from database" step, selecting that table.

Make sure your 'Model.edmx' file has the name same as 'Model.tt' if not, just rename it the same name with the *.tt file. Then delete entities from designer and import again by 'update model from database'. 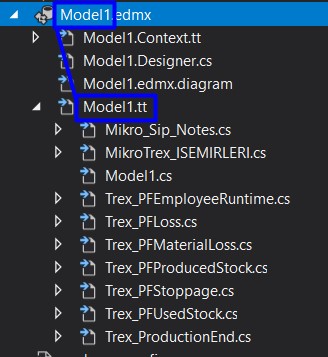 Not the answer you're looking for? Browse other questions tagged entity-framework ef-database-first database-first or ask your own question.

862
Entity Framework vs LINQ to SQL
93
ADO.NET Entity Framework: Update Wizard will not add tables
729
How do I view the SQL generated by the Entity Framework?
660
SqlException from Entity Framework - New transaction is not allowed because there are other threads running in the session
774
Fastest Way of Inserting in Entity Framework
373
Introducing FOREIGN KEY constraint may cause cycles or multiple cascade paths - why?
586
No Entity Framework provider found for the ADO.NET provider with invariant name 'System.Data.SqlClient'