What is git tag, How to create tags & How to checkout git remote tag(s)

when I checkout remote git tag use command like this:

error: pathspec origin/remote_tag_name did not match any file(s) known to git.

I can find remote_tag_name when I use git tag command.

Let's start by explaining what a tag in git is

A tag is used to label and mark a specific commit in the history.
It is usually used to mark release points (eg. v1.0, etc.).

Although a tag may appear similar to a branch, a tag, however, does not change. It points directly to a specific commit in the history and will not change unless explicitly updated. 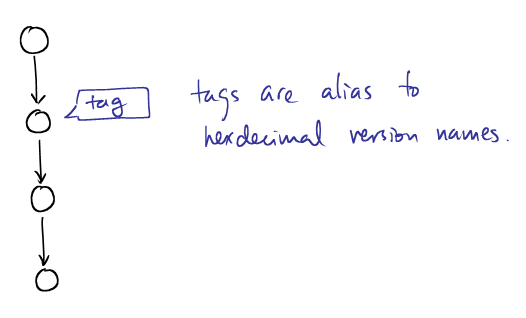 You will not be able to checkout the tags if it's not locally in your repository so first, you have to fetch the tags to your local repository.

First, make sure that the tag exists locally by doing

Then check out the tag by running

Instead of origin use the tags/ prefix.

In this sample you have 2 tags version 1.0 & version 1.1 you can check them out with any of the following:

All of the above will do the same since the tag is only a pointer to a given commit.

How to create tags?

There are 2 ways to create a tag:

The difference between the 2 is that when creating an annotated tag you can add metadata as you have in a git commit:
name, e-mail, date, comment & signature 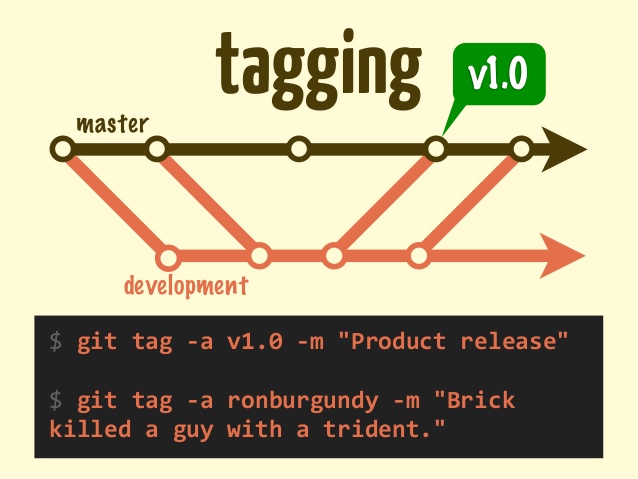 How to delete tags?

Note: If you try to delete a non existig Git tag, there will be see the following error:

How to clone a specific tag?

In order to grab the content of a given tag, you can use the checkout command. As explained above tags are like any other commits so we can use checkout and instead of using the SHA-1 simply replacing it with the tag_name

Since git supports shallow clone by adding the --branch to the clone command we can use the tag name instead of the branch name. Git knows how to "translate" the given SHA-1 to the relevant commit

--branch can also take tags and detaches the HEAD at that commit in the resulting repository.

How to push tags?

To push all tags:

Using the refs/tags instead of just specifying the <tagname>.

To push annotated tags and current history chain tags use:

This flag --follow-tags pushes both commits and only tags that are both: 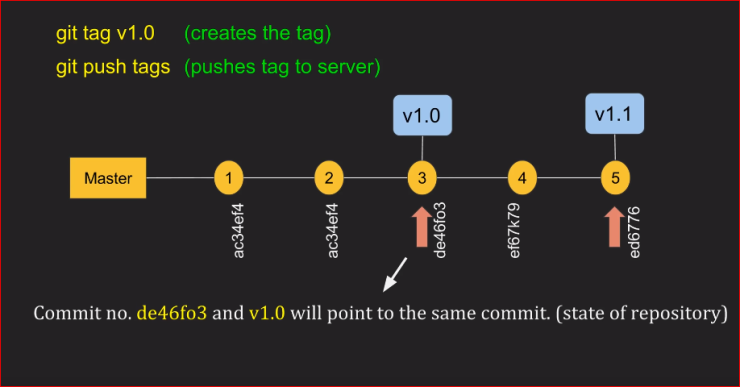 From Git 2.4 you can set it using configuration

(This answer took a while to write, and codeWizard's answer is correct in aim and essence, but not entirely complete, so I'll post this anyway.)

There are "remote branches", more properly called "remote-tracking branches", but it's worth noting that these are actually local entities. There are no remote tags, though (unless you (re)invent them). There are only local tags, so you need to get the tag locally in order to use it.

There are some unusual special-case names that do not begin with refs/: HEAD, ORIG_HEAD, MERGE_HEAD, and CHERRY_PICK_HEAD in particular are all also names that may refer to specific commits (though HEAD normally contains the name of a branch, i.e., contains ref: refs/heads/branch). But in general, references start with refs/.

One thing Git does to make this confusing is that it allows you to omit the refs/, and often the word after refs/. For instance, you can omit refs/heads/ or refs/tags/ when referring to a local branch or tag—and in fact you must omit refs/heads/ when checking out a local branch! You can do this whenever the result is unambiguous, or—as we just noted—when you must do it (for git checkout branch).

During fetch and push, Git uses strings it calls refspecs to transfer references between the local and remote repository. Thus, it is at these times, and via refspecs, that two Git repositories can get into sync with each other. Once your names are in sync, you can use the same name that someone with the remote uses. There is some special magic here on fetch, though, and it affects both branch names and tag names.

You should think of git fetch as directing your Git to call up (or perhaps text-message) another Git—the "remote"—and have a conversation with it. Early in this conversation, the remote lists all of its references: everything in refs/heads/ and everything in refs/tags/, along with any other references it has. Your Git scans through these and (based on the usual fetch refspec) renames their branches.

Let's take a look at the normal refspec for the remote named origin:

But what about tags? There's no refspec for them—at least, not by default. You can set one, in which case the form of the refspec is up to you; or you can run git fetch --tags. Using --tags has the effect of adding refs/tags/*:refs/tags/* to the refspec, i.e., it brings over all tags (but does not update your tag if you already have a tag with that name, regardless of what the remote's tag says Edit, Jan 2017: as of Git 2.10, testing shows that --tags forcibly updates your tags from the remote's tags, as if the refspec read +refs/tags/*:refs/tags/*; this may be a difference in behavior from an earlier version of Git).

Note that there is no renaming here: if remote origin has tag xyzzy, and you don't, and you git fetch origin "refs/tags/*:refs/tags/*", you get refs/tags/xyzzy added to your repository (pointing to the same commit as on the remote). If you use +refs/tags/*:refs/tags/* then your tag xyzzy, if you have one, is replaced by the one from origin. That is, the + force flag on a refspec means "replace my reference's value with the one my Git gets from their Git".

For historical reasons,3 if you use neither the --tags option nor the --no-tags option, git fetch takes special action. Remember that we said above that the remote starts by displaying to your local Git all of its references, whether your local Git wants to see them or not.4 Your Git takes note of all the tags it sees at this point. Then, as it begins downloading any commit objects it needs to handle whatever it's fetching, if one of those commits has the same ID as any of those tags, git will add that tag—or those tags, if multiple tags have that ID—to your repository.

Edit, Jan 2017: testing shows that the behavior in Git 2.10 is now: If their Git provides a tag named T, and you do not have a tag named T, and the commit ID associated with T is an ancestor of one of their branches that your git fetch is examining, your Git adds T to your tags with or without --tags. Adding --tags causes your Git to obtain all their tags, and also force update.

In most normal cases, though, a simple git fetch will do the job, bringing over their commits and their matching tags, and since they—whoever they are—will tag commits at the time they publish those commits, you will keep up with their tags. If you don't make your own tags, nor mix their repository and other repositories (via multiple remotes), you won't have any tag name collisions either, so you won't have to fuss with deleting or renaming tags in order to obtain their tags.

When you need qualified names

I mentioned above that you can omit refs/ almost always, and refs/heads/ and refs/tags/ and so on most of the time. But when can't you?

The complete (or near-complete anyway) answer is in the gitrevisions documentation. Git will resolve a name to a commit ID using the six-step sequence given in the link. Curiously, tags override branches: if there is a tag xyzzy and a branch xyzzy, and they point to different commits, then:

will give you the ID to which the tag points. However—and this is what's missing from gitrevisions—git checkout prefers branch names, so git checkout xyzzy will put you on the branch, disregarding the tag.

In case of ambiguity, you can almost always spell out the ref name using its full name, refs/heads/xyzzy or refs/tags/xyzzy. (Note that this does work with git checkout, but in a perhaps unexpected manner: git checkout refs/heads/xyzzy causes a detached-HEAD checkout rather than a branch checkout. This is why you just have to note that git checkout will use the short name as a branch name first: that's how you check out the branch xyzzy even if the tag xyzzy exists. If you want to check out the tag, you can use refs/tags/xyzzy.)

Because (as gitrevisions notes) Git will try refs/name, you can also simply write tags/xyzzy to identify the commit tagged xyzzy. (If someone has managed to write a valid reference named xyzzy into $GIT_DIR, however, this will resolve as $GIT_DIR/xyzzy. But normally only the various *HEAD names should be in $GIT_DIR.)

2Some would say "very not-helpful", and I would tend to agree, actually.

3Basically, git fetch, and the whole concept of remotes and refspecs, was a bit of a late addition to Git, happening around the time of Git 1.5. Before then there were just some ad-hoc special cases, and tag-fetching was one of them, so it got grandfathered in via special code.

4If it helps, think of the remote Git as a flasher, in the slang meaning.

In order to checkout a git tag , you would execute the following command

eg as mentioned below.

To find the remote tags:

Create a tag with the given tag message

To Push a single tag to remote

Push all tags to remote

When I want the code at a tag, I may not want to create a branch (typically, I only need a full branch if I'll be hotfixing it).

To temporarily rewind your branch to the code at the tag, do this:

I can use it briefly as needed, then get back to HEAD of the branch when I'm done, with a simple git pull.

To get the specific tag code try to create a new branch add get the tag code in it. I have done it by command : $git checkout -b newBranchName tagName

Here's a command to do that :-

Where 7cceb02 is the beginning part of the commit id.

You can then push the tag using git push origin v1.0.

You can do git log to show all the commit id's in your current branch.

-1
Git tagging: checkout tag, make changes, push to new tag
0
Attach an existing tag to a branch in Git
0
How would I push to GitHub with a tag
712
How is a tag different from a branch in Git? Which should I use, here?
742
How to create a new branch from a tag?
6
Generating release notes from git commits
4
Checking out tags on Git
3
Using Git to organize a folder with different versions of the same project
2
Creating a private fork from a public repository with base/trunk being an upstream tag
1
two git branches at same commit, "git log a..b" shows a difference
See more linked questions