If I open it as a "Web Site", it tries to treat the node_modules directory as part of the project's normal JavaScript files and hits an error when the path exceed the maximum path length.

But I can't open it as any other project type unless I first create a project of that type and then move all the VS Code files into that folder.

Visual Studio and Visual Studio Code only shared their name, not the idea behind it. To extend Jenny O'Reilly answer:

This means the idea behind these two editors is completely different.

A workaround would be a Blank Solution in which you set up your Visual Studio Code Project.

Another trick would be the answer to this question. You can open your Project Folder as a Website Project.

As you mentioned, there will be errors because Visual Studio tries to build the solutions. For the next few readers of this response, the work around for this (as John Pankowicz writes in the comment) is:

Also like in Visual Studio Code, there will be a prompt command for opening Folders. Right now you can use this in the preview version:

In the future you will be able to use:

Personally I wouldn't recommend Visual Studio (not code) for HTML/Website projects without server-side-development, because I don't see any features. Even the intellisense suggests to me sometimes bad HTML Code (it's not the IDE's fault).

After all web projects are still text files. You can easily control group projects like this with Version Control. Visual Studio Code even provides an integrated Git support. 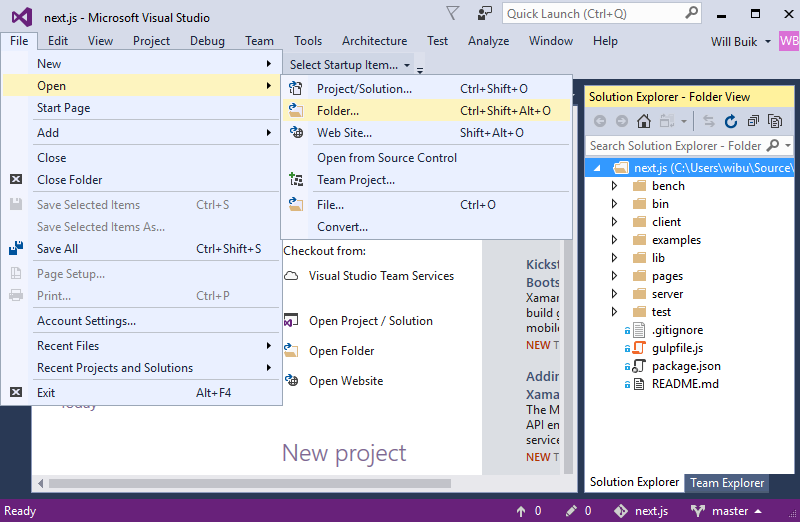 You can find more details in here.

I haven't seen any better ways of doing this, but will be happy when we can open a folder just as easilly as we can with VSCode

Not the answer you're looking for? Browse other questions tagged visual-studio projects-and-solutions visual-studio-code or ask your own question.