How to Copy and Resize Image in Windows 10 UWP

I have used the code from http://www.codeproject.com/Tips/552141/Csharp-Image-resize-convert-and-save to resize images programmatically. However, that project uses the System.Drawing libraries, which are not available to Windows 10 applications.

I have tried using the BitmapImage class from Windows.UI.Xaml.Media.Imaging instead, but it does not seem to offer the functionality that was found in System.Drawing..

Has anyone had any luck being able to resize (scale down) images in Windows 10? My application will be processing images from multiple sources, in different formats/sizes, and I am trying to resize the actual images to save space, rather than just letting the application size it to fit the Image in which it is being displayed.

I have modified the code from the above mentioned link, and have a hack which works for my specific need. Here it is:

This way seems to work, but ideally rather than modifying the original BitmapImage, I would like to create a new/copy of it to modify and return instead.

Here is a shot of it in action: 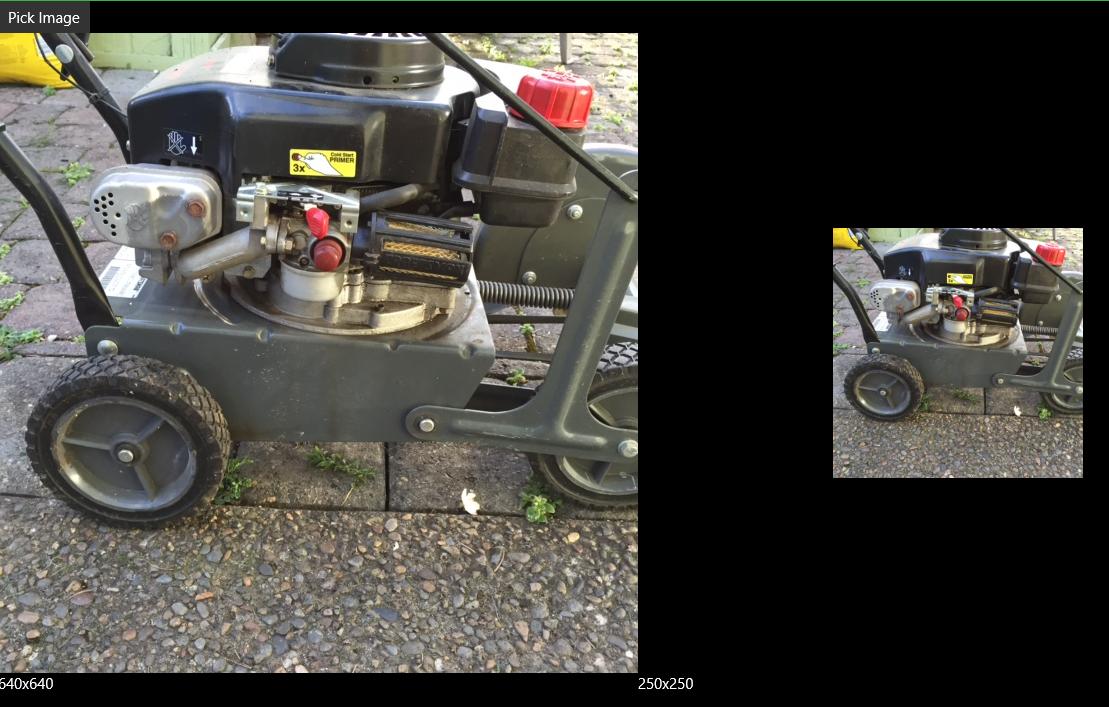 I may want to return a copy of the original BitmapImage rather than modifying the original.

There is no good method to directly copy a BitmapImage, but we can reuse StorageFile for several times.

If you just want to select a picture, show it and in the meanwhile show the re-sized picture of original one, you can pass the StorageFile as parameter like this:

In this scenario you just need to call this task and show the re-sized image like this:

If you want to keep the BitmapImage parameter due to some reasons (like the sourceImage might be a modified bitmap but not directly loaded from file), and you want to re-size this new picture to another one, you will need to save the re-sized picture as a file at first, then open this file and re-size it again.

Not the answer you're looking for? Browse other questions tagged c# image windows-10 windows-10-universal or ask your own question.

0
Ram usage of BitmapImage in UWP
0
How to resize Mapicons in UWP component
0
uwp c# Zoom Image without scrollview
1
How can I set BasicProperties?

3275
How can I cast int to enum?
3844
How to enumerate an enum
1308
Strange out of memory issue while loading an image to a Bitmap object
1954
How to lazy load images in ListView in Android
114
How to easily resize/optimize an image size with iOS?
1578
CSS: How do I auto-resize an image to fit a 'div' container?
1507
How to vertically align an image inside a div
1
pseudocode - how to resize image to max size
613
CSS force image resize and keep aspect ratio
1000
Changing image size in Markdown