My entire website is an Ajax website, so all of my views (apart from Layout) can either be loaded normally or via an ajax actionlink. If I put the Javascipt files in with the partial views then all of the code works as expected, but the scripts get loaded multiple times (thus making the user download more scripts, all of them aren't being cached for some reason either).

If I put the script files in my Layout, then they only get loaded once but if a partial view gets loaded then the JS code for that partial view doesn't work obviously, because the scripts were already loaded when the partial view wasn't rendered.

My question is, how can I make the scripts get loaded only once, but also somehow have them affect partial views?

You can see the scripts getting loaded multiple times if they are in the partial view: 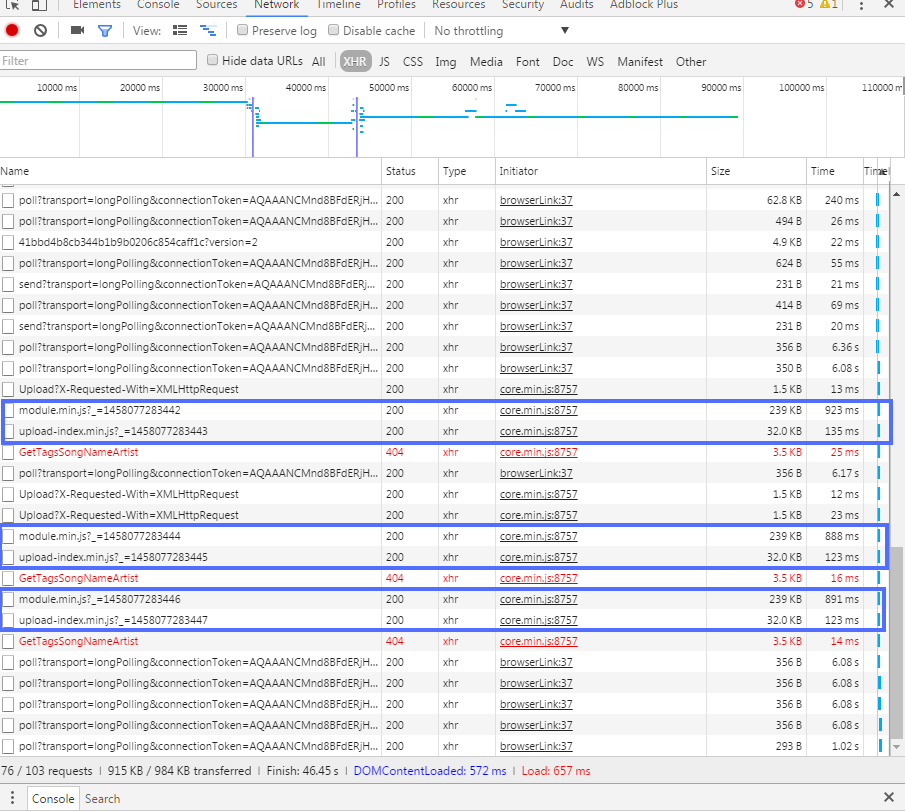 Scripts should not be in partial views, only the main view or its layout. Not only do you have the duplicate issue you have identified your self, but it can lead to other issues such as invalidating existing scripts.

If you need to handle events associated with dynamically added items then use event delegation using the .on() function. For example

will handle the click event of elements with class="someclass" that have been added as a child element of container even if they are added after the DOM has been initially loaded.

If you need to attach a plugin to dynamically added elements, then attach it after the element has been added to the DOM, for example

Not the answer you're looking for? Browse other questions tagged ajax asp.net-mvc partial-views or ask your own question.

428
ASP.NET MVC controller actions that return JSON or partial html
573
Compile Views in ASP.NET MVC
93
How to get an ASP.NET MVC Ajax response to redirect to new page instead of inserting view into UpdateTargetId?
5
ASP.Net MVC run JavaScript in PartialView when loaded using Ajax.ActionLink
0
How can I ajax load new pages/views into MainContent when using a master page
859
File Upload ASP.NET MVC 3.0
0
Ajax with MVC Partial Views - Ajax.ActionLink not working, while jQuery does
0
how to pass selected value in a DropDownList as input parameter in @Ajax.ActionLink