I need to run composer update at my hosting so I log in with ssh and try to run the command:

inside /www folder where I have Laravel and composer installation

but I get error: 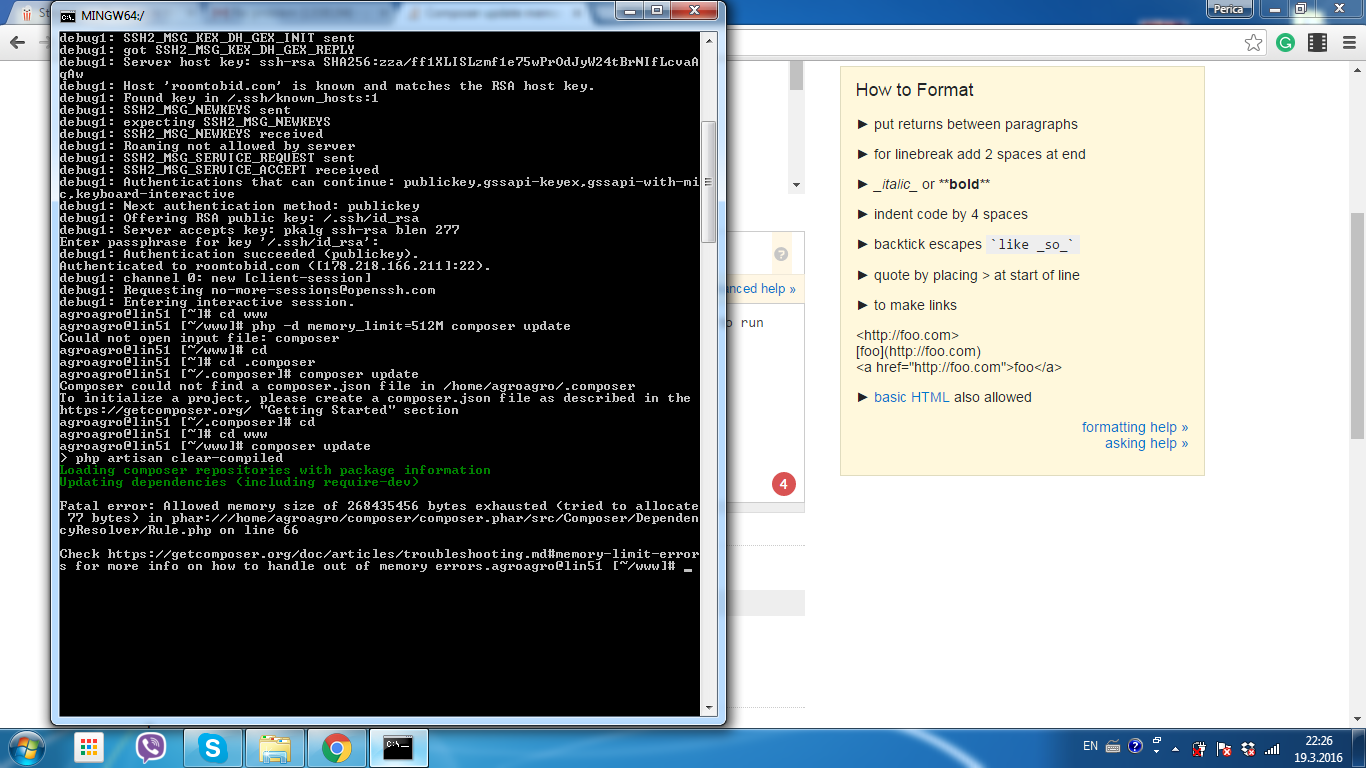 in contact with my hosting provider they tell me to run command:

I run this command but I get: "Could not open file: composer"

What to do? What is the solution here?

When you run composer update, the OS will look into the configured paths and try to locate an executable file with that name.

When running php composer update, the composer string is treated as a parameter to PHP, which is not searched in any paths. You have to provide the full path in order to run it.

Running which composer will tell you where the OS finds the composer executable, and then you simply use the full path in the PHP command:

Note that 512MB might be too few. My perception is that it will happily take 1GB or more, depending on the number of dependencies you use and the variety of versions that you theoretically allow, i.e. if you allow Symfony ~2.3, then you make Composer deal with a lot more possible versions compared to using ~2.7.

Also note that running Composer on the production machine is not the best idea. You would have to have access to Github, maybe provide access credentials, have VCS tools installed, and you will easily break your site if any of the remote hosting servers is offline during your update. It is a better idea to use Composer on a deployment system that does all the preparation, and then moves all the files onto the production server.

It's the year 2020 now, and the way Composer manages its memory has changed quite a bit. The most important thing is that Composer will increase the memory limit by itself if it encounters a limit set too low. This however immediately triggers the problem of running out of memory on machines that have too few memory installed. You can make Composer use less memory by setting the environment variable like COMPOSER_MEMORY_LIMIT=512M, but this will create problems if Composer would need more memory to correctly operate.

My main point remains true: Do not run Composer on machines that have too few memory installed. You potentially need 1.5 GB of free memory to be able to update everything.

Set it to use as much memory as it wants with:

I am facing problems with composer because it consumes all the available memory, and then, the process get killed ( actualy, the output message is "Killed")

So, I was looking for a solution to limit composer memory usage.

I tried ( from @Sven answers )

But it didn't work because

Then I found a command that works :

I had to combine COMPOSER_MEMORY_LIMIT and memory_limit in the command line:

If there's enough memory composer would internally consume it and run without any problem. No need to specifically tell the composer to do it.

Have you tried to increase your swap memory, coz it worked for me. I increased the swap memory to 4096Mb (4GB) and now it all looks great to me.

first use "sudo free" to see available memory and swap memory. and configure swap as,

to make it permenant add this to /etc/fstab file, /swapfile swap swap defaults 0 0

you can increase your swap memory by changin bs= 1024k or 2048k or 8096k depending on your physical volume size. use 'swapon' and swapoff commands to see the difference.

The best solution for me is

You can change the memory_limit value in your php.ini

Try increasing the limit in your php.ini file

Use -1 for unlimited or define an explicit value like 2G

On MAC OS High Siera I ran the below:

All answers above are setting the loaded config which does update, but notice additional .ini files parsed has php-memory-limits.ini as a separate file. You have to update this file memeory limit as well. same way open in text editor and change to somehting like 2G. The output on memory limit failure should tell you how much memory it needs to run, just set it to higher than that or -1 for unlimited.

This error can occur especially when you are updating large libraries or libraries with a lot of dependencies. Composer can be quite memory hungry.

Be sure that your composer itself is updated to the latest version:

Use the format “128M” for megabyte or “2G” for gigabyte. You can use the value “-1” to ignore the memory limit completely.

Another way would be to increase the PHP memory limit:

How large is your aws server? If it only has 1gb of ram, setting the memory limit of 2gb in php.ini won't help.

If you can't/don't want to also increase the server side to get more RAM available, you can enable SWAP as well.

See here for how to enable swap. It enables 4gb, although I typically only do 1GB myself.

Source: Got from laracast site

In my case none of the answers helped. Finally it turned out, that changing to a 64 bit version of PHP (M$ Windows) fixed the problem immediately. I did not change any settings - it just worked.

I made this on Widnows 10 and worked with me:

You can change xx Value that you want

I'm running Laravel 6 with Homestead and also ran into this problem. As suggested here in the other answers you can prefix COMPOSER_MEMORY_LIMIT=-1 to a single command and run the command normally. If you'd like to update your PHP config to always allow unlimited memory follow these steps.

Note that this could eat up infinite amount of memory on your machine. Probably not a good idea for production lol. With Laravel Valet had to follow this article and update the memory value here:

Then restart the server with Valet:

This answer was also helpful for changing the config with Laravel Valet on Mac so the changes take effect.

For those who use Laravel Homestead

step 2. cd into your laravel directory

step 4. run the command php -d memory_limit=-1 /opt/cpanel/bin/composer update (you can also run the code if it works for you)

In my case it needed higher permissions along with this memory limit increase.

Not the answer you're looking for? Browse other questions tagged php laravel ssh composer-php or ask your own question.

30
How to setup laravel framework in wampserver properly?
173
file_put_contents(meta/services.json): failed to open stream: Permission denied
284
Could not open input file: artisan
55
How to install Laravel via Laravel Installer on Windows?
53
Tell Composer to use Different PHP Version
17
Composer: Updating a Project Created with `create-project`
38
How to update Composer in Windows 10
233
Composer require runs out of memory. PHP Fatal error: Allowed memory size of 1610612736 bytes exhausted
1
Composer out of memory - need alternative way to increase PHP memory_limit
0
Out of memory error in 'Composer update' command inside docker container in Aws ec2 instance