I want to install matplotlib on windows. To do this I tried those lines,

which I found at this link

But I think the installation does not succesfully occured. This is result of py setup.py install: 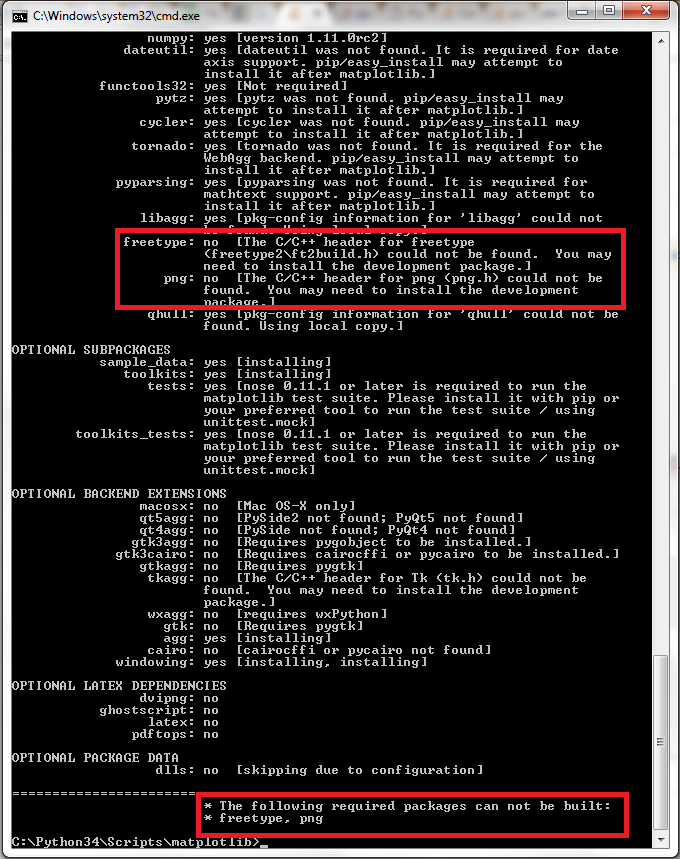 So still following imports does not work;

An error says Unresolved import. So I am supposing this is because freetype and png did not installed.

Now I found freetype.dll and installed it but where should I put that file?

Any idea about this problem.

Yes. Matplotlib has some dependencies that need to be installed in order for the library to function fully. Quoting:

Once you have satisfied the requirements detailed below (mainly python, numpy, libpng and freetype), you can build matplotlib:

To be sure of the correct procedure check the build instructions. If this process seems somewhat complex (it sometimes is) you can consider Python distributions such as:

, that already bring several libraries by default and making it a lot easier to work with Python (and extensions).

Not the answer you're looking for? Browse other questions tagged python matplotlib png freetype or ask your own question.

39
How to install matplotlib with Python3.2

5224
How do I merge two dictionaries in a single expression in Python (taking union of dictionaries)?
5089
How to call an external command?
5940
What are metaclasses in Python?
2281
How do you change the size of figures drawn with matplotlib?
6347
Does Python have a ternary conditional operator?
3079
How to get the current time in Python
2394
Manually raising (throwing) an exception in Python
3597
Does Python have a string 'contains' substring method?
1250
Save plot to image file instead of displaying it using Matplotlib