Gradient Descent vs Adagrad vs Momentum in TensorFlow

I'm studying TensorFlow and how to use it, even if I'm not an expert of neural networks and deep learning (just the basics).

Following tutorials, I don't understand the real and practical differences between the three optimizers for loss. I look at the API and I understand the principles, but my questions are:

1. When is it preferable to use one instead of the others ?

2. Are there important differences to know ?

Here is a brief explanation based on my understanding:

I would say that SGD, Momentum and Nesterov are inferior than the last 3.

Salvador Dali's answer already explains about the differences between some popular methods (i.e. optimizers), but I would try to elaborate on them some more.
(Note that our answers disagree about some points, especially regarding ADAGRAD.)

(Mostly based on section 2 in the paper On the importance of initialization and momentum in deep learning.)

Each step in both CM and NAG is actually composed of two sub-steps:

Here is a demonstration from an answer about intuition for CM and NAG: 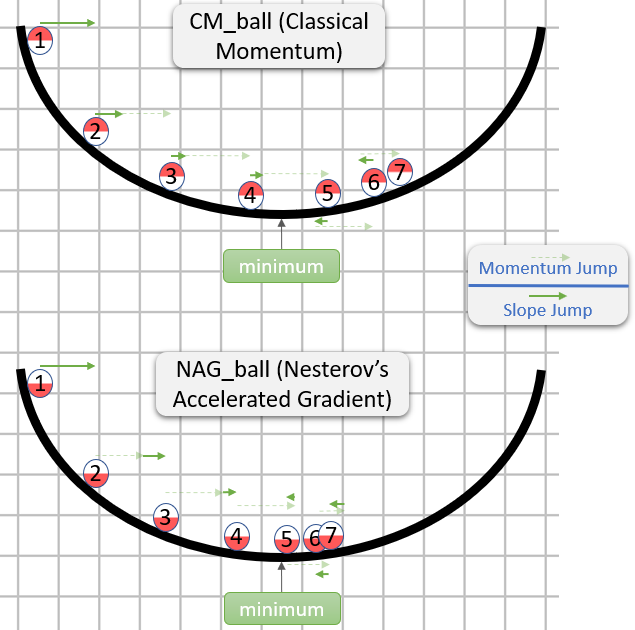 So NAG seems to be better (at least in the image), but why?

Here is a demonstration (from the gif below): 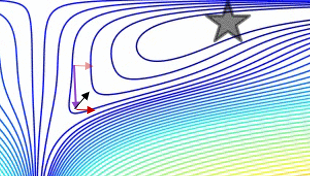 Note that this argument for why NAG is better is independent of whether the algorithm is close to a minimum.
In general, both NAG and CM often have the problem of accumulating more momentum than is good for them, so whenever they should change direction, they have an embarrassing "response time". The advantage of NAG over CM that we explained doesn't prevent the problem, but only makes the "response time" of NAG less embarrassing (but embarrassing still).

This "response time" problem is beautifully demonstrated in the gif by Alec Radford (which appeared in Salvador Dali's answer): 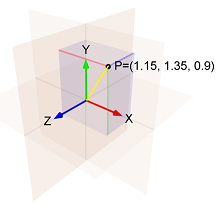 Note two things about the i-th component of the step:

This means that ADAGRAD is sensitive to the choice of the hyperparameter learning_rate.
In addition, it might be that after some time the steps become so small, that ADAGRAD virtually gets stuck.

The idea presented in this paper was derived from ADAGRAD in order to improve upon the two main drawbacks of the method: 1) the continual decay of learning rates throughout training, and 2) the need for a manually selected global learning rate.

The paper then explains an improvement that is meant to tackle the first drawback:

Instead of accumulating the sum of squared gradients over all time, we restricted the window of past gradients that are accumulated to be some fixed size w [...]. This ensures that learning continues to make progress even after many iterations of updates have been done.
Since storing w previous squared gradients is inefficient, our methods implements this accumulation as an exponentially decaying average of the squared gradients.

This is an approximation of a window of size w because the weights in earlier steps are very small.

(When I think about an exponentially decaying average, I like to visualize a comet's trail, which becomes dimmer and dimmer as it gets further from the comet:

If you make only this change to ADAGRAD, then you will get RMSProp, which is a method that was proposed by Geoff Hinton in Lecture 6e of his Coursera Class.

So in RMSProp, the i-th component of the t-th step is given by:

But as aforementioned, ADADELTA also aims to get rid of the learning_rate hyperparameter, so there must be more stuff going on in it.

In ADADELTA, the i-th component of the t-th step is given by:

while exp_decay_avg_of_squared_steps_i is an exponentially decaying average of the squared i-th components of all of the steps calculated (until the t-1-th step).
sqrt(exp_decay_avg_of_squared_steps_i + epsilon) is somewhat similar to momentum, and according to the paper, it "acts as an acceleration term". (The paper also gives another reason for why it was added, but my answer is already too long, so if you are curious, check out section 3.2.)

(Mostly based on Adam: A Method for Stochastic Optimization, the original Adam paper.)

Adam is short for Adaptive Moment Estimation (see this answer for an explanation about the name).
The i-th component of the t-th step is given by:

Note that Adam uses an exponentially decaying average of the i-th components of the gradients where most SGD methods use the i-th component of the current gradient. This causes Adam to behave like "a heavy ball with friction", as explained in the paper GANs Trained by a Two Time-Scale Update Rule Converge to a Local Nash Equilibrium.
See this answer for more about how Adam's momentum-like behavior is different from the usual momentum-like behavior.

Let's boil it down to a couple of simple question:

Which optimizer would give me the best result/accuracy?

Which optimizer should I use right now?

Maybe, take AdamOptimizer and run it for learning_rate 0.001 and 0.0001. If you want better results, try running for other learning rates. Or try other optimizers and tune their hyperparameters.

There are a few aspects to consider when choosing your optimizer:

Plain SGD is the bare minimum that can be done: it simply multiplies the gradients by the learning rate and adds the result to the weights. SGD has a number of beautiful qualities: it has only 1 hyperparameter; it does not need any additional memory; it has minimal effect on the other parts of training. It also has 2 drawbacks: it might be too sensitive to learning rate choice and training can take longer than with other methods.

From these drawbacks of plain SGD we can see what are the more complicated update rules (optimizers) are for: we sacrifice a part of our memory to achieve faster training and, possibly, simplify the choice of hyperparameters.

Memory overhead is typically non-significant and can be ignored. Unless the model is extremely large, or you are training on GTX760, or fighting for ImageNet leadership. Simpler methods like momentum or Nesterov accelerated gradient need 1.0 or less of model size (size of the model hyperparameters). Second order methods (Adam, might need twice as much memory and computation.

Convergence speed-wise pretty much anything is better than SGD and anything else is hard to compare. One note might be that AdamOptimizer is good at starting training almost immediately, without a warm-up.

I consider easy-of-use to be the most important in the choice of an optimizer. Different optimizers have a different number of hyperparameters and have a different sensibility to them. I consider Adam the most simple of all readily-available ones. You typically need to check 2-4 learning_rates between 0.001 and 0.0001 to figure out if the model converges nicely. For comparison for SGD (and momentum) I typically try [0.1, 0.01, ... 10e-5]. Adam has 2 more hyperparameters that rarely have to be changed.

Relation between optimizer and other parts of training. Hyperparameter tuning typically involves selecting {learning_rate, weight_decay, batch_size, droupout_rate} simultaneously. All of them are interrelated and each can be viewed as a form of model regularization. One, for example, has to pay close attention if, exactly, weight_decay or L2-norm is used and possibly choose AdamWOptimizer instead of AdamOptimizer.

Not the answer you're looking for? Browse other questions tagged tensorflow deep-learning or ask your own question.