How to get the BUILD_USER in Jenkins when job triggered by timer?

I wanted to show the user who triggered a Jenkins job in the post job email. This is possible by using the plugin Build User Vars Plugin and the env variable BUILD_USER. But this variable do not get initialized when the job is triggered by a scheduler.

How can we achieve this? I know we have a plugin called - EnvInject Plugin, and that can be used...

But I just want to know how we can use this and achieve the solution...

Build user vars plugin wasn't working for me so I did a quick-and-dirty hack:

Note: Output will be both User ID and User Name

When the build is triggered manually by a logged-in user, that user's userid is available in the BUILD_USER_ID environment variable.

However, this environment variable won't be replaced / initialized when the build is automatically triggered by a Jenkins timer / scheduler.

Attached a screenshot for details

This can be resolved by injecting a condition to the Job by using Conditional Build Step Plugin / Run Condition Plugin,where in to each job we can add a condition to initialize the variable BUILD_USER_ID only when the build is caused or triggered by the Timer or scheduler, by setting a condition using the regular expression..

Install 'Build User Vars Plugin' and use like below:- [ See https://plugins.jenkins.io/build-user-vars-plugin ]

Be sure to check mark the Set jenkins user build variables checkbox under Build Environment for your Jenkins job's configuration.

I found similar but really working on Jenkins 2.1.x and easy for my understanding way. And it works without any plugins.

You can use in this construction any classes described here. They will be returns maps with usable values.

This gets the username who clicked "Build Now" in a Jenkins pipeline job.

I'm using a combination of the 'Execute Shell' and 'Env Inject' plugin as follows: 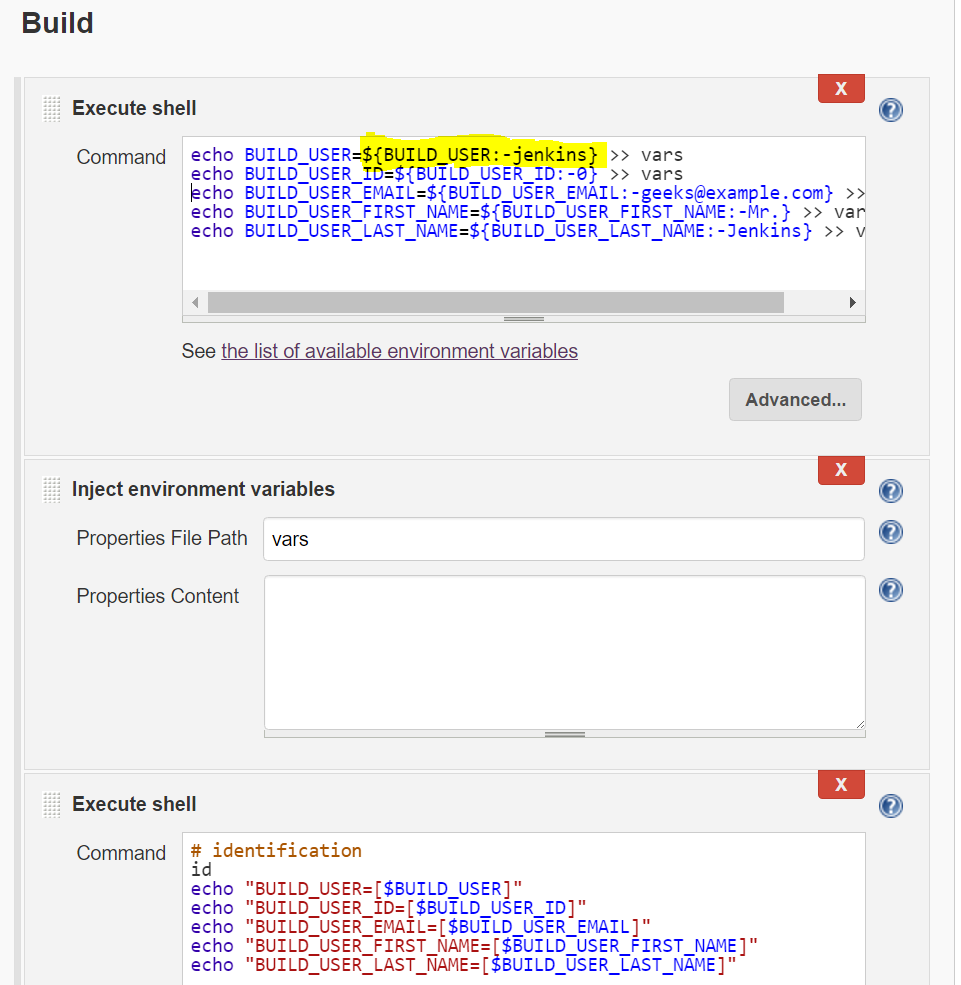 The token $BUILD_CAUSE from the email-ext plugin is what you are looking for.

Some tokens get added by plugins, but this one should be aviable by default.

Edit: As pointed out by bishop in the comments, when using the EnvInject plugin, the $BUILD_CAUSE token gets changed to behave differently.

I wanted to trigger build initiator info to one of my slack/flock group so I used following way to get build initiator email and name by writing in Declarative fashion .

I am just printing here, you can use to store in some environment variable or write in one file giving file path according to your own convenience..

If you wanted to detect when the build was started by a timer you can select a Run? value of Build Cause, with Build Cause of: TimerTrigger 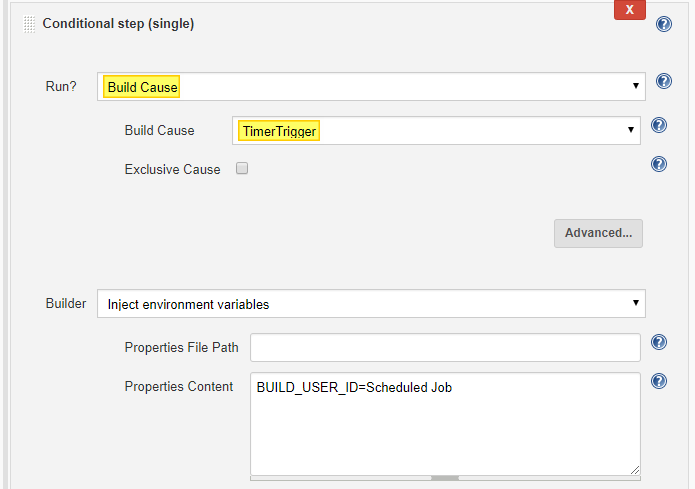 This is a little simpler and more robust than using a regex. There are also other triggers you can detect, for example when the build was a result of Source Control Management commit, you can select: SCMTrigger.

This below is working for me.

I have written a groovy script to extract the started by which would correctly get the source, regardless if user, scm or timer (could add more). It would recursively navigate the build tree to get the "original" 'started by' cause https://github.com/Me-ion/jenkins_build_trigger_cause_extractor

I created a function that return the Triggered Job Name:

How to return Username & UserId:

There is other way to get user_id, where you don't need to install anything.

266
How to set environment variables in Jenkins?
73
What shell does Jenkins use?
4
Jenkins Java: Get user who started the build
3
How can I add the Remarks, Committers and Developers in Jenkins pipeline webhook for office365Connector
0
Can I stop Jenkins jobs per the user who triggered it?
0
Display Username of pipeline builds on UI
0
$BUILD_USER not expanded in Jenkins email notification

815
How to restart Jenkins manually?
266
How to set environment variables in Jenkins?
13
Include Build request user in jenkins mail
3
How can I get the started user inside Jenkins Job even in downstream project?
275
How do I clone a job in Jenkins?
3
Set BUILD_USER in Jenkins when the build process is time triggered
202
How can I trigger another job from a jenkins pipeline (jenkinsfile) with GitHub Org Plugin?
140
How to list all `env` properties within jenkins pipeline job?
0
How to get environment variable in Jenkins email notification?