Im using Ionic to build an Android app and I'm finding a problem that I cant work around or find an answer to. When I run ionic build android or ionic emulate android I get the following:

I believe I have added the correct variables to PATH and ANDROID_HOME under System Variables, but please check: http://imgur.com/a/UOdCd

The first image is ANDROID_HOME, the second shows where the sdk is located, the third is the Error itself and the fourth is my path variable.

I run it from Git Bash. Running as an administrator did not make any difference, I also tried reinstalling Android SDK (with Android Studio) in a different folder (was in %HOME%\AppData\Local\Android\ before) without any difference. Also tried to reboot after reinstalling SDK.

I also tried to run the SDK Manager first (C:\Android\sdk\tools\android.bat) and keeping it open while trying to build or emulate, but it still didn't work.

You need to create a new system variable called ANDROID_HOME and as a value put the path to the android SDK installation directory. 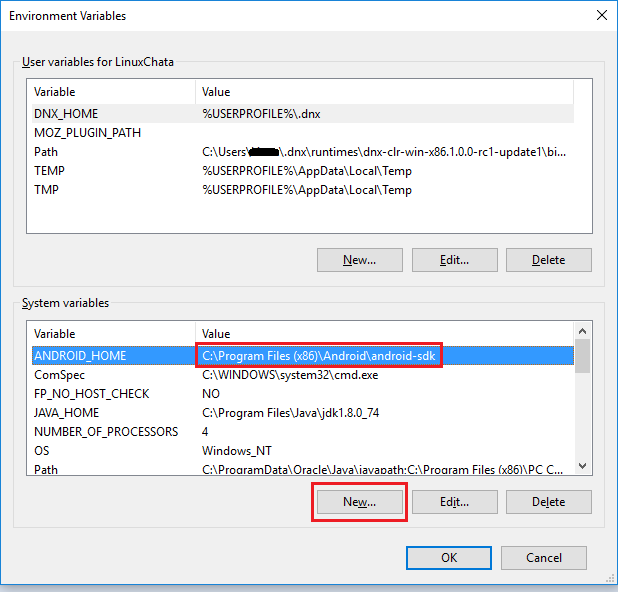 For more information, please refer to the installation guide.

Not the answer you're looking for? Browse other questions tagged build ionic-framework environment-variables android-sdk-2.3 emulation or ask your own question.