How can I choose Swift compiler version

I'm using Xcode 7.3 but my project is in Swift 2.1. I don't want to update my codes right now. So how can I choose or download older version of Swift compiler? Many thanks in advance!

The following example is tested on Xcode 8.3 with swift 3.1

2) Download Toolchain with swift version that you need. For example I have 3.1 version of swift and downloaded swift 3.0.2 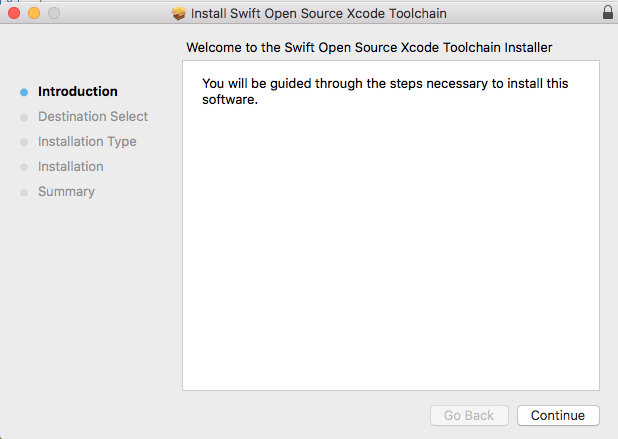 4) Open Xcode and select in menu:

That is all folks 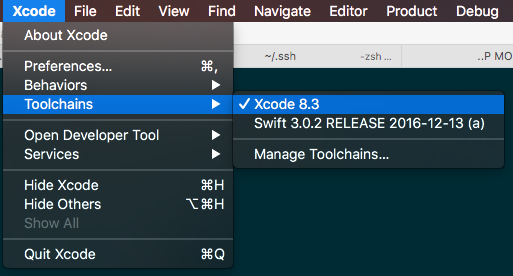 Originally I posted this is a comment, but I should have just posted it as an answer:

If you're writing an app for the App Store, you can only use a release (non-beta) version of Xcode (see “Submitting Apps to the App Store using Xcode”) and the toolchain supplied with that version of Xcode (see “Using Downloads / Apple Platforms”). So you can either use Xcode 7.2 and continue using Swift 2.1, or you can use Xcode 7.3 and update your code to Swift 2.2.

You can have multiple versions of Xcode installed. You can keep Xcode 7.2 installed and use it for your non-updated Swift 2.1 projects, and use Xcode 7.3 on new projects. Note that you'll have to manually open each project in the appropriate version of Xcode. You can download old versions of Xcode here.

If you're not going to put your app in the App Store, then maybe you could extract the Swift 2.1 toolchain from the Xcode 7.2 bundle and turn it into a .xctoolchain for use with Xcode 7.3, but you're really in unexplored, unsupported territory if you go that route.

If you're following the answers involving a .xctoolchain combined with Xcode 9 beta you'll encounter an error similar to this: <unknown>:0: error: unknown argument: '-index-store-path' Command /Library/Developer/Toolchains/swift-3.1.1-RELEASE.xctoolchai‌​n/usr/bin/swiftc failed with exit code 1

The reason is that Apple has added a new feature/argument, which hasn't made its way to open source Swift yet. You can get around this issue by launching Xcode from the command line with the feature disabled like this: /path/to/Xcode-beta.app/Contents/MacOS/Xcode -IDEIndexEnableBoltIndex NO

Thanks to the Swift team

Select your target, then in your Build Settings, search for "swift language" and then you will find Swift Language Version.

1086
How to change the name of an iOS app?
595
UIScrollView Scrollable Content Size Ambiguity
536
How would I create a UIAlertView in Swift?
970
Swift Beta performance: sorting arrays
633
iOS app with framework crashed on device, dyld: Library not loaded, Xcode 6 Beta
532
How to add constraints programmatically using Swift
465
Getting error "No such module" using Xcode, but the framework is there
688
How do I see which version of Swift I'm using?
490
Updating to latest version of CocoaPods?
173
Module compiled with Swift 5.1 cannot be imported by the Swift 5.1.2 compiler