Is it possible to use sun.misc.Unsafe to call C functions without JNI?

A piece of C/C++ code could provide a JNI method with an array of function pointers. But is there a way to call to the stack the functions that array's pointers are pointing to, directly from inside Java code (without using JNI or similar)? JNI somehow does something like that, so there must be a way. How does JNI do it? Is it via sun.misc.Unsafe? Even if it is not, could we use some Unsafe workaround to get our hands on the JVM code that does that?

I don't plan to use that commercially of course. I'm not even a professional, I just really enjoy coding and I've been studying CUDA lately so I thought maybe I could experiment with mixing everything together, but the overhead of JNI calls would defeat the purpose of having GPU accelerated code.

Is JNI that slow?

JNI has already been optimized a lot, you should give it a try first. But it indeed has certain overhead, see details.

This overhead can be significant if a native function is simple and is called frequently. JDK has a private API called Critical Natives to reduce overhead of calling functions that do not require much of JNI functionality.

A native method must satisfy the following conditions to become a critical native:

The declaration of a critical native looks like a regular JNI method, except that

Critical natives are supported only in HotSpot JVM starting from JDK 7. Moreover, "critical" version is called only from compiled code. Therefore you need both critical and standard implementation to make this work correctly.

This feature was designed for internal use in JDK. There is no public specification or something. Probably the only documentation you may find is in the comments to JDK-7013347.

This benchmark shows critical natives can be several times faster than regular JNI methods when the native workload is very small. The longer is method, the smaller is relative overhead. 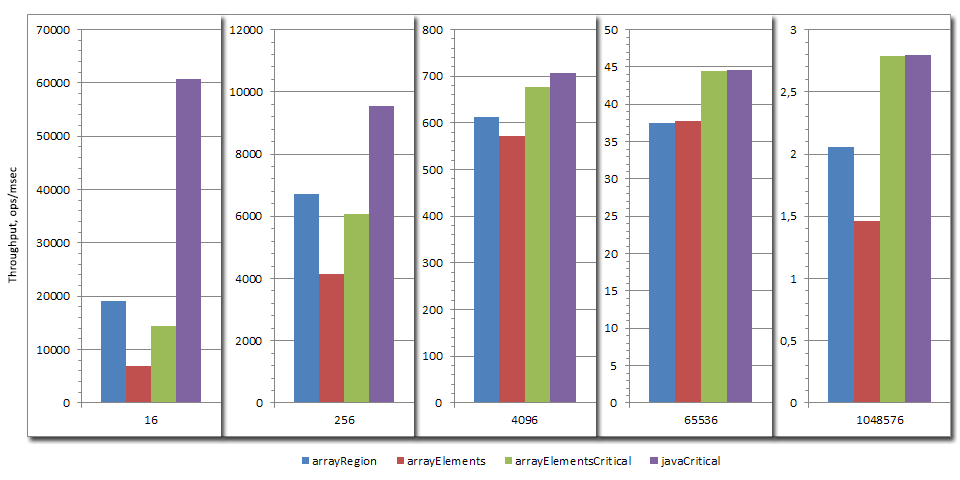 P.S. There is an ongoing work in JDK to implement Native MethodHandles that will serve as a faster alternative to JNI. However it is unlikely to appear prior to JDK 10.

It's worth to mention here that another popular opensource JVM has a similar, documented, but not popularized way to speed JNI calls for some native methods.

Faster native calls to the Java Native Interface (JNI) are available using the @FastNative and @CriticalNative annotations. These built-in ART runtime optimizations speed up JNI transitions and replace the now deprecated !bang JNI notation. The annotations have no effect on non-native methods and are only available to platform Java Language code on the bootclasspath (no Play Store updates).

The @FastNative annotation supports non-static methods. Use this if a method accesses a jobject as a parameter or return value.

The @CriticalNative annotation provides an even faster way to run native methods, with the following restrictions:

The @FastNative and @CriticalNative annotations disable garbage collection while executing a native method. Do not use with long-running methods, including usually-fast, but generally unbounded, methods.

Pauses to the garbage collection may cause deadlock. Do not acquire locks during a fast native call if the locks haven't been released locally (i.e. before returning to managed code). This does not apply to regular JNI calls since ART considers the executing native code as suspended.

@FastNative can improve native method performance up to 3x, and @CriticalNative up to 5x.

This doc refers to the now deprecated !bang notation that was used to speed up some native calls on Dalvik JVM.

Not the answer you're looking for? Browse other questions tagged java c jvm java-native-interface native-code or ask your own question.

21
What does a JVM have to do when calling a native method?
4
How to avoid copying data between Java and Native C++ Code
2
Java Native Method to convert Long Array to Byte array
0
How to get JavaCritical to really work on JNI
0
Extracting a string from JNI GetByteArrayElements call
1
AVX/AVX2 support in Java, without JNI overhead
0
JVM uses Java_xx method instead of JavaCritical_xx

118
Use JNI instead of JNA to call native code?
75
Passing pointers between C and Java through JNI
10
String s1 == String s2 (true) but FieldOffset is different
606
Should I always use a parallel stream when possible?
624
Is it possible to use Java 8 for Android development?
1
Use JNI to call C functions in host binary
0
NDK JNI functions call
6
Do Java Atomics only require atomicity with respect to the VM
7
Understanding safe access of JNI arguments