I am trying to replicate an existing Android Application that I made to iOS. In my application, I should be able to connect to a WiFi network given the SSID and the Password. The SSID and the Password can be hardcoded or can be inputted by the user. I was going through the internet to research how this can be done on iOS, however, it seems that this behavior is highly discouraged and that there's no way on doing this using public/documented libraries that won't get your application rejected by the App Store.

The thing is I'll be using this application personally and I don't plan on submitting it to the App Store so it's okay if I use external libraries. If my friends would want to use it, I could export an enterprise ipa and give them instructions on how to install it.

Upon searching, it seemed that MobileWifi.framework was a good candidate. However, it does not seem that there's a straightforward way of using this library to connect to a WiFi network given the SSID and the Password.

Is there anyone who has successfully tried to connect to a Wifi Network given the SSID and Password?

With iOS 11, Apple provided public API you can use to programmatically join a WiFi network without leaving your app.

The class you’ll need to use is called NEHotspotConfiguration.

To use it, you need to enable the Hotspot capability in your App Capabilities (Adding Capabilities). Quick working example :

This will prompt the user to join the “SSID-Name” WiFi network. It will stay connected to the WiFi until the user leaves the app.

This doesn't work with the simulator you need to run this code with an actual device to make it work. 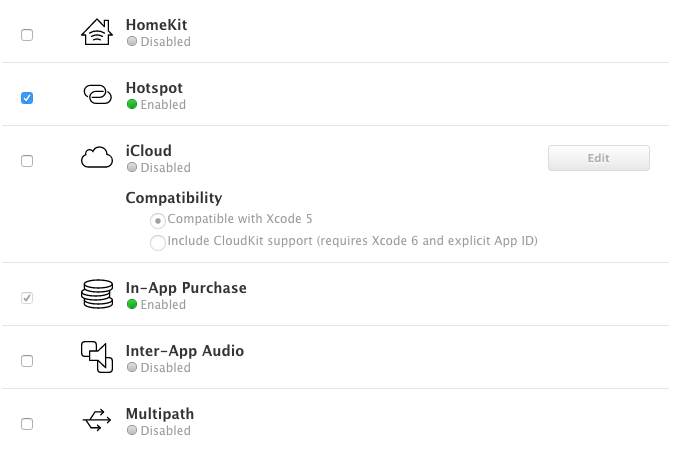 Contrary to what you see here and other places, you can do it. It's hard to make pretty enough for normal users, but if doesn't have to be then it's really easy to code. It's an enterprise admin thing, but anyone can do it. Look up "Connection Profiles." Comcast does this in their iOS app to setup their hotspots for you, for example.

Basically, it's an XML document that you get the device to ingest via Safari or Mail. There's a lot of tricks to it and the user experience isn't great, but I can confirm that it works in iOS 10 and it doesn't require jailbreaking. You use Configurator to generate the XML, and I suggest this thread for serving it (but people don't find it because it's not specifically about WiFi), and this blog for querying if it's installed which is surprisingly nontrivial but does indeed work.

I've answered this question many times, but either don't have enough rep or am too dumb to figure out how to close questions as duplicate so better answers can be found more easily.

This question was asked many times:

The most interesting answer seems to be in the first link which points to a GitHub project: wifiAssociate. However someones in the third link explains that this doesn't work anymore with iOS8 so you might have hard time getting it running.
Furthermore the iDevice must be jailbroken.

Make sure both Network Extensions & Hotspot Configuration are turned on in Capabilities.

my two cents: if you got:

simply it does NOT work under simulator.

on real device it does compile. so use:

We can programmatically connect wifi networks after IOS 11. You can connect wifi using ssid and password like following.

You can connect to wifi using Xcode 9 and swift 4

I'm not sure if this will help anyone but there IS a Wifi QR code that Apple put into iOS since version 9 if I'm not mistaken. It's been there a while.

You can go here: https://qifi.org

Put your SSID and password in. Print out the QR code or just keep it on a screen. Point the iPhone at the QR code using the camera app. You will get a notification bar that if you press will setup your WIFI connection on the fly.

This 'should' work with Android but I haven't test it yet. It DOES work with iOS.

The nice thing with this solution is you can make your WIFI base 'hidden' on the network and folks can still connect to it which is very desirable in a high traffic area for security reasons.

Not the answer you're looking for? Browse other questions tagged ios wifi or ask your own question.