Why use #if 0 for block commenting out?

Reverse engineering code and I'm kind of appalled at the style, but I wanted to make sure there's no good reason for doing these things....

Is it just me or is this a horrible coding style

And why wrap code not intended for compilation in an

EDIT: So as some explained below, this is due to the possibility to flummox /* */ which I didn't realize.

But I still don't understand, why not just use your programming environment tools or favorite text editor's macro's to block comment it out using "//"

wouldn't this be MUCH more straightforward and easy to know to visually skip?

Am I just inexperienced in C and missing why these things might be a good idea -- or is there no excuse, and I'm justified in feeling irritated at how ugly this code is?

I won't say it's a good practice, but I see it rather often.

The single line flow-control+statement is easy enough to understand, although I personally avoid it (and most of the coding guidelines I've worked under forbid it)

BTW, I'd probably edit the title to be somewhat useful "Why use #if 0 instead of block comments"

If you have the following

If you naively replace the #if 0/#endif with /* */, that will cause the comment to end right after flumuxiation, causing a syntax error when you hit the */ in the place of the #endif above..

EDIT: One final note, often the #if 0 syntax is just used while developing, particularly if you have to support multiple versions or dependencies or hardware platforms. It's not unusual for the code to be modified to

With a centralized header defining (or not) hundreds of those #define constants. It's not the prettiest thing in the world, but every time I've worked on a decent sized project, we've used some combination of runtime switches, compile-time constants (this), compile-time compilation decisions (just use different .cpp's depending on the version), and the occasional template solution. It all depends on the details.

While you're the developer just getting the thing working in the first place, though... #if 0 is pretty common if you're not sure if the old code still has value.

Comments are comments. They describe the code.

Code that's being excluded from compilation is code, not comments. It will often include comments, that describe the code that isn't being compiled, for the moment.

They are two distinct concepts, and forcing the same syntax strikes me as being a mistake.

I'm editing this because I'm in the middle of a sizeable refactor and I'm making heavy use of this pattern.

As a part of this refactor, I'm removing some widely-used types, and replacing them with another. The result, of course, is that nothing will build.

And I really hate spending days fixing one issue after another in the hope that when I'm done everything will build and all the tests will run.

So my first step is to #ifdef-out all the code that won't compile, and then to [Ignore] all the unit tests that call it. With this done everything builds and all the non-ignored tests pass.

The result is a lot of functions that look like this:

It's going to take me a couple of days to worth through all of it, and all of these #if's will be gone, before I create the pull request to merge this, but I find it helpful, during the process.

Also, many #if 0 blocks have an else block as well. This gives an easy way to swap between two implementations/algorithms, and is arguably less error-prone than mass-commenting out one section and mass-uncommenting another. However, you'd be better off using something more readable like #if DEBUG in that event.

As far as block commenting using // is concerned, one reason that I can think of is that, should you check that code into your source control system, the blame log will show you as the last editor for those lines of code. While you probably want the commenting to be attributed to you, at the same time the code itself is also being attributed to you. Sure, you can go back and look at previous revisions if you need to check the blame log for the "real" author of the code, but it would save time if one preserved that information in the current revision.

That's pretty idiomatic C right there. I don't see what's so wrong with it. It's not a beautiful piece of code but it's easy to read and is clear what's going on and why, even without context.

The variable names could be better, and and it'd probably be safer to use snprintf or perhaps strncpy.

If you think it could be better, what would you prefer it look like?

Obviously, everyone has their own opinions on this sort of thing. So here's mine:

I would never write code like the above, and would think less of anyone who did. I can't count the number of times people think it's ok to get away without scope braces, and then been bitten by it.

Putting the control statement on the same line as the code block is even worse; the lack of indenting makes it harder to see the flow control whilst reading. Once you've been coding for a few years, you get used to being able to read and interpret code quickly and accurately, so long as you can rely on certain visual cues. Circumventing these cues for "special cases" means that the reader has to stop and do a double-take, for no good reason.

#if (0), on the other hand, is ok during development, but should be removed once code is "stable" (or at least replace 0 with some meaningful preprocessor symbol name).

I would call it sloppier for more the inconsistant spacing than anything else. I have had time where I found it better to put short statements on the same line as their IF, though those statements are stretching it.

The inline style is better for vertical brevity... could easily be broken into 4, more lines

Personally I hate the next style since it so long-winded, making it difficult to skim a file.

points above noted. But monitors being widescreen and all, these days, I sort of don't mind

Always seem to have too much horizontal space, and not enough vertical space on my screen!

Idiomatic and concise. If it got touched more than 2 or 3 times, I would bracket and next-line it. It's not very maintainable if you add logging information or other conditions.

Good to turn on blocks of debug code or not. Also, would avoid compilation errors related to trying to block comment this sort of thing out:

Very occasionally I use the more concise style when it supports the symmetry of code and the lines don't get too long. Take the following contrived example:

and the concise version:

Bugs are much more likely to jump straight into your face.

Disclaimer: This example is contrived, as I said. Feel free to discuss the use of strcmp, magic numbers and if a table based approach would be better. ;)

#if is a macro which checks for the condition written aside to it, since ‘0’ represents a false, it means that the block of code written in between ‘#if 0’ and ‘#endif’ will not be compiled and hence can be treated as comments.

So, we can basically say that #if 0 is used to write comments in a program.

The section written between “#if 0” and “#endif” are considered as comments.

What are nested comments? Nested Comments mean comments under comments and can be used in various cases like :

Let us take an example that you have written a code like below: 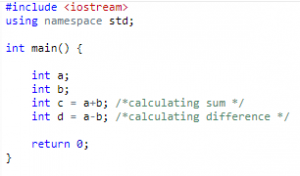 Now, someone is reviewing your code and wants to comment this whole piece of code in your program because, he doesn’t feel the need for this piece of code. A common approach to do that will be : 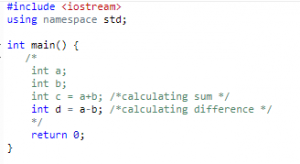 The above is an example of nested comments.The problem with the above code is, as soon as the first “/” after “/” is encountered, the comment ends there. i.e., in the above example, the statement : int d = a-b; is not commented. 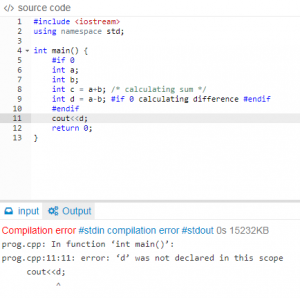 Here, we have used nested comments using #if 0.

I can name a few reasons for using #if 0:

#if 0 ... #endif is pretty common in older C code. The reason is that commenting with C style comments /* .... */ doesn't work because comments don't nest.

Even though it is common, I'd say it has no place in modern code. People did it in olden days because their text editors couldn't block comment large sections automatically. More relevantly, they didn't have proper source code control as we do now. There's no excuse for leaving commented or #ifdef'd in production code.

Not the answer you're looking for? Browse other questions tagged c compilation c-preprocessor or ask your own question.

882
Why use apparently meaningless do-while and if-else statements in macros?
595
Why does C++ compilation take so long?
1756
With arrays, why is it the case that a[5] == 5[a]?
1163
How do I use extern to share variables between source files?
652
Why are #ifndef and #define used in C++ header files?
1628
Why does changing 0.1f to 0 slow down performance by 10x?
1090
Why does the C preprocessor interpret the word "linux" as the constant "1"?
1573
Compiling an application for use in highly radioactive environments
440
Why do all the C files written by my lecturer start with a single # on the first line?