Im trying to solve a problem i have with my system (Python/Storm), but not sure what's the best tool.

The Goal: create the edges of a graph, using constraints on the Node input and output.

i have around 400+ python function(apache storm shell bolts each bolt wrap one function - Storm doesn't really matter in this case, i will treat them as nodes ).

Each bolt/function/Node has a defined input and output name-attributes list. i have a source (which has output, but NO input). Nodes (have input and output list) Sink (only input no output).

To Make it more clear lets say i have:

I would like NetworkX (or other graph library) to create the edges alone using those constraints on the Node.

Each node output is ONLY the output list, not output+input.

the output i want is the list of edges: 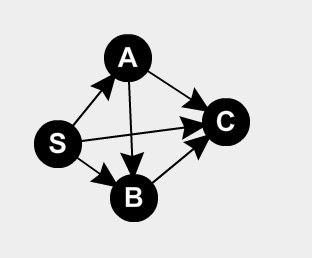 Does NetworkX support such a build? and if so how can i implement it?

You could build a bipartite graph (I think directed?) from your data and than "project" it onto one set of nodes to make the graph you want. E.g. if you have the directed edges S->a and a->T the two node sets are {S,T} and {a}. Projecting onto the node set {S,T} gives S->T because there is a path from S->T in the original bipartite graph.

Not the answer you're looking for? Browse other questions tagged python graph graphviz networkx or ask your own question.

4662
Calling an external command from Python
5506
What are metaclasses in Python?
2958
Finding the index of an item given a list containing it in Python
5725
Does Python have a ternary conditional operator?
2699
How to get the current time in Python
2139
Manually raising (throwing) an exception in Python
3601
Does Python have a string 'contains' substring method?