In a program I am working on, I need to multiply two matrices repeatedly. Because of the size of one of the matrices, this operation takes some time and I wanted to see which method would be the most efficient. The matrices have dimensions (m x n)*(n x p) where m = n = 3 and 10^5 < p < 10^6.

With the exception of Numpy, which I assume works with an optimized algorithm, every test consists of a simple implementation of the matrix multiplication:

Below are my various implementations:

The code is the same as the Python one, but it is compiled just in time before being used:

So far, each method call has been timed using the timeit module 10 times. The best result is kept. The matrices are created using np.random.rand(n,m).

Here, mat2 is a custom class that I defined and dot(const mat2& m1, const mat2& m2) is a friend function to this class. It is timed using QPF and QPC from Windows.h and the program is compiled using MinGW with the g++ command. Again, the best time obtained from 10 executions is kept. 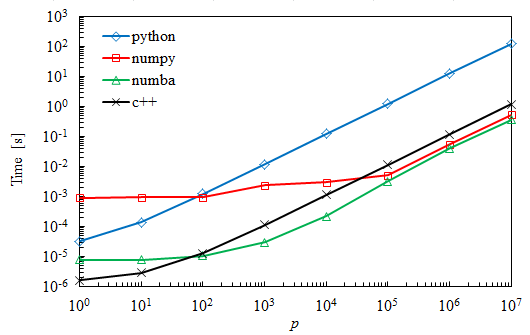 As expected, the simple Python code is slower but it still beats Numpy for very small matrices. Numba turns out to be about 30% faster than Numpy for the largest cases.

I am surprised with the C++ results, where the multiplication takes almost an order of magnitude more time than with Numba. In fact, I expected these to take a similar amount of time.

This leads to my main question: Is this normal and if not, why is C++ slower that Numba? I just started learning C++ so I might be doing something wrong. If so, what would be my mistake, or what could I do to improve the efficiency of my code (other than choosing a better algorithm) ?

Here is the header of the mat2 class.

As many suggested, using the optimization flag was the missing element to match Numba. Below are the new curves compared to the previous ones. The curve tagged v2 was obtained by switching the two inner loops and shows another 30% to 50% improvement. 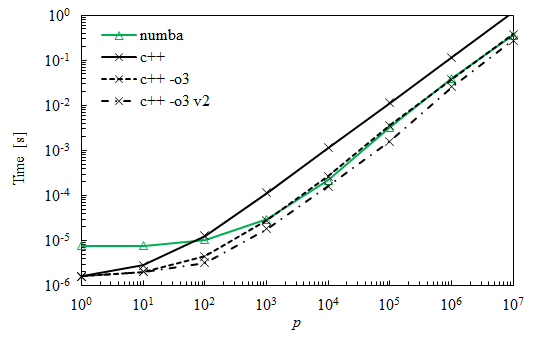 Definitely use -O3 for optimization. This turns vectorizations on, which should significantly speed your code up.

Numba is supposed to do that already.

What I would recommend

If you want maximum efficiency, you should use a dedicated linear algebra library, the classic of which is BLAS/LAPACK libraries. There are a number of implementations, eg. Intel MKL. What you write is NOT going to outpeform hyper-optimized libraries.

Note that Numpy dot ALREADY calls dgemm! You're probably not going to do better.

Why your c++ is slow

Your classic, intuitive algorithm for matrix-matrix multiplication turns out to be slow compared to what's possible. Writing code that takes advantage of how processors cache etc... yields important performance gains. The point is, tons of smart people have devoted their lives to making matrix matrix multiply extremely fast, and you should use their work and not reinvent the wheel.

In your current implementation most likely compiler is unable to auto vectorize the most inner loop because its size is 3. Also m2 is accessed in a "jumpy" way. Swapping loops so that iterating over p is in the most inner loop will make it work faster (col will not make "jumpy" data access) and compiler should be able to do better job (autovectorize).

Not the answer you're looking for? Browse other questions tagged python c++ numpy optimization numba or ask your own question.

514
Calling C/C++ from Python?
294
How do I create an empty array/matrix in NumPy?
690
What is a clean, pythonic way to have multiple constructors in Python?
454
What are the advantages of NumPy over regular Python lists?
186
Create numpy matrix filled with NaNs
281
Converting NumPy array into Python List structure?
1802
Why is reading lines from stdin much slower in C++ than Python?
2
Cannot replicate results comparing Python, Numpy and Numba matrix multiplication
0
Numpy matrix functions with Numba