How can I turn off “scrolling the history” in iTerm2

I have installed the new iTerm 2. It asked me in a yellow bar at the top if I'd like to enable a mouse feature. Unfortunately I don't remember the exact sentence anymore.

By accident I approved. Now when I use the scroll wheel on the mouse in iTerm, it doesn't scroll the up anymore but instead it goes triggers the command history. Like if I would press the up-cursor.

I couldn't find the right settings to turn that off again. Does anyone know where I can toggle this option?

A few terminals, including iTerm2, have a feature where they change the behavior of the wheel mouse when a full-screen program such as vi, or screen or tmux is running. This happens when those programs use the alternate screen, to provide a useful function. Normally, when using the alternate screen in iTerm2, the wheel mouse acts like the scrollbar, scrolling the entire screen up/down. But when this feature is enabled, iTerm2 sends cursor up/down keys, making your command-history change.

As suggested in another comment, select the Preferences menu: 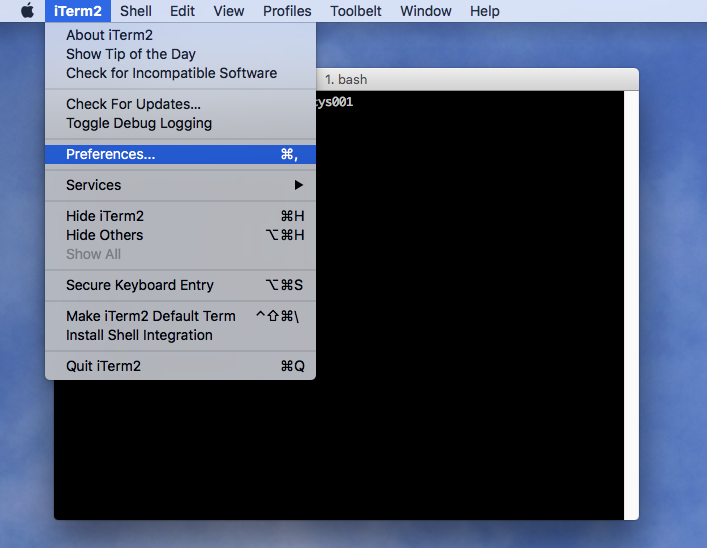 and in that, select the Advanced tab. Scroll down to the Mouse section, 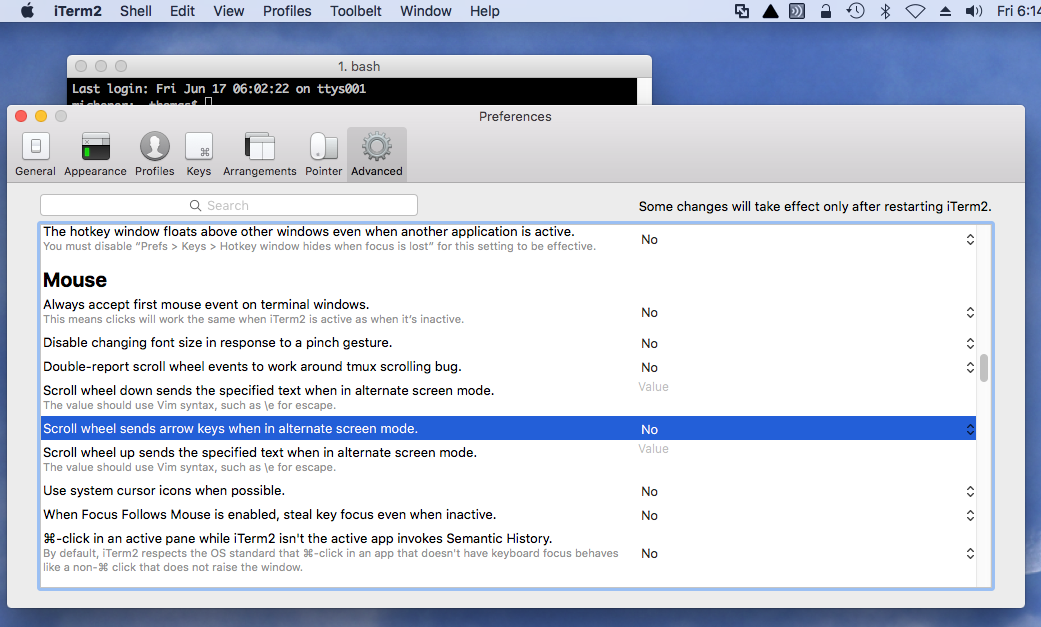 and toggle the entry for

from Yes to No. You will have to restart iTerm2 for the change to take effect. (With iTerm2 v3.1.5 changes take effect without restarting.)

Scrolling the history with the mouse wheel should in theory never happens. It happens in practice because sometimes the alternate screen mode is not correctly switched back. The accepted answer solves the problem by deactivating a feature that is useful, namely scrolling in vi, less, ... with the mouse wheel or trackpad. You can keep the option from the advanced preferences:

set to yes. You will sometimes be trap in the scroll history mode. But if you know how to escape, it's not a problem.

You probably just need to get out of alternate console.

With iTerm2 you can also hold Option while using the scroll wheel to force window scrolling, in case you do want the wheel to continue to work in vim.

The behavior you're seeing is the expected (and correct) behavior when in the alternate screen. The only problem you have is that you dropped into bash, or whatever, on the alternate screen, possibly while losing a connection or from a killed vim or less. EG you were in less +F /var/log/something and got disconnected.

You see someone has already written that the tput rmcup command will exit to the main screen.

I'm generally successful in iTerm2 with echo -e '\e[?1049l' I actually don't find rmcup any easier to remember, restore memory of console up?.

I was having this same problem and none of the solutions I read and tried worked. What fixed my problem was turning Secure Keyboard Entry off and now when I use the mouse to scroll it in ssh and in terminal mode on macOS 10.13 it works like I expect it too!

Not the answer you're looking for? Browse other questions tagged terminal iterm2 or ask your own question.

0
How to exit alternate screen scrolling on iTerm2 Vim?

818
How to move the cursor word by word in the OS X Terminal
2542
How to print colored text to the terminal?
651
How can I copy the output of a command directly into my clipboard?
951
How do I clear/delete the current line in terminal?
105
ZSH iterm2 increase number of lines history
309
How to export iTerm2 Profiles
350
How can I scroll up more (increase the scroll buffer) in iTerm2?
57
How to turn off word wrap in iTerm2?
0
How do I make the scroll wheel work in an interactive tmux session with iterm2?