According to the docs, the latest node (Node 5+) should support the spread operator by default, like so:

The array spread syntax is supported, but the object spread syntax is not - this is most likely due to it not being finalized as part of the ECMAScript spec yet (it was originally planned for inclusion in ES7/ES2016, but it got bumped back, if I recall correctly).

Your options in the meantime are either to use a transpiler (such as Babel, with the transform-object-rest-spread plugin), or if that feels like overkill, you can use the new built-in Object.assign function. The object spread syntax is effectively just syntax sugar around Object.assign - the example in your question could be expressed like so:

Note the empty object as the first argument; the properties from the rest of the passed objects get merged into it, with those furthest to the right of the function call taking priority. It may seem more intuitive to simply have oldObj as the first argument, but this doesn't have quite the same effect - it would mutate the existing oldObj as well as returning it. Having an empty object as the target leaves oldObj unchanged.

Update: As of Node 8.6, object spread syntax is supported.

Update 2: Object spread syntax has finally made its way through the proposal process, and will be part of the ES2018 spec.

What you tried to use is called object spread and is not part of the es2015 specification. Node only supports the regular spread in function calls and array literals. Unfortunately not even array destructuring is supported yet, although they link to the MDN page which describes both structuring and destructuring use of ....

You can use Object.assign instead: 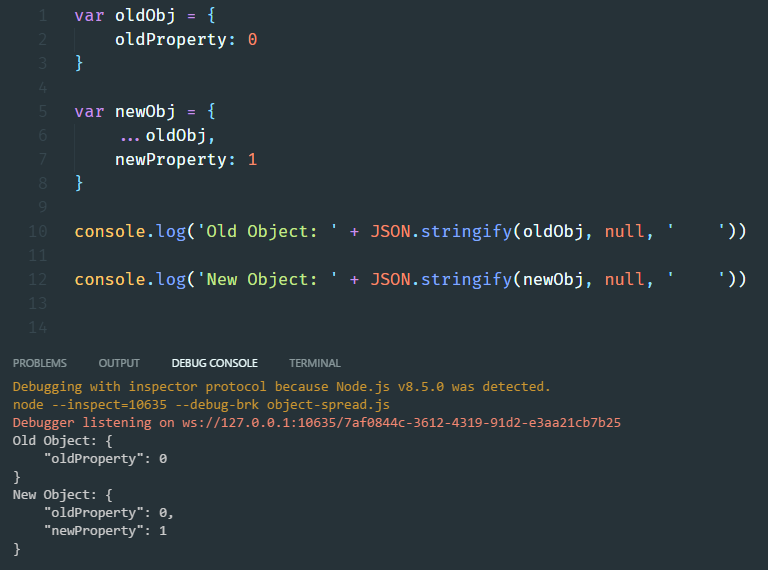 Not the answer you're looking for? Browse other questions tagged node.js ecmascript-6 or ask your own question.

177
ReferenceError: describe is not defined NodeJs
1
VS 2015 Gulp Failed to load message
2
I am creating objecting in the classes of a instance at "Syncano' . I am reveiving this ReferenceError: callback is not defined
1
javascript syntax error in node server
2
Unexpected token { in wit.js
1
Can not run webdriver manager
4
SyntaxError: Unexpected token function
0
How do i solve 'Microsoft.AspNetCore.NodeServices.HostingModels.NodeInvocationException'
1
Setup server with express and body-parser
0
Hitting npm error while running npm -version