I'm trying to get an image to display as the launch screen from my Launch Screen.storyboard file, however the image never displays. I have labels that show up fine, but the image doesn't appear.

This is how the launch screen looks in the Launch Screen.storyboard file: 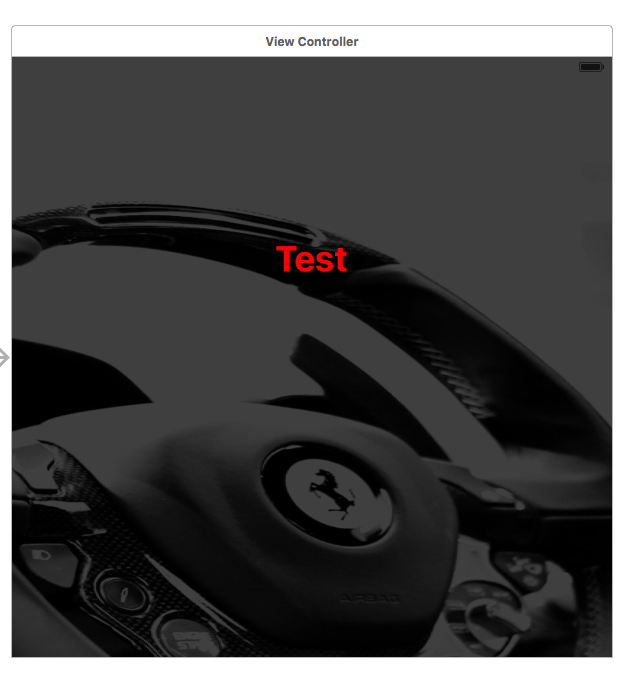 However when I run the app on the simulator (as well as on the physical device) this is what shows up: 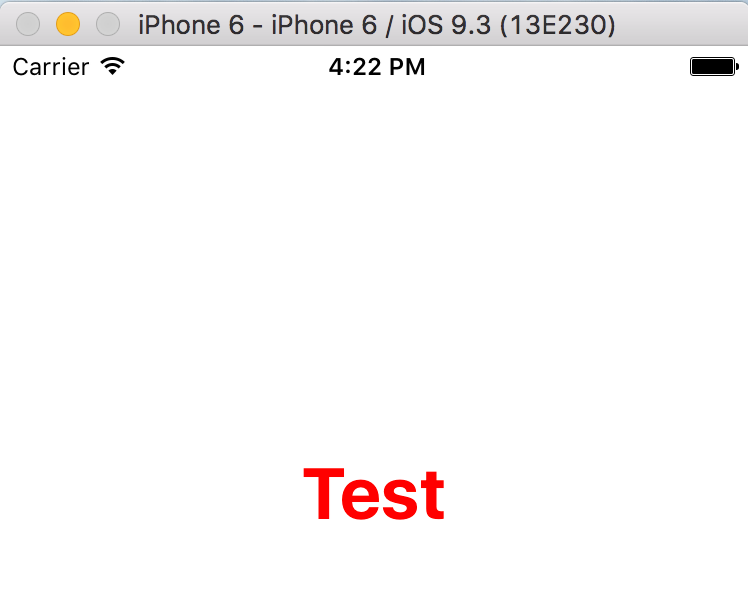 As you can see, the label "Test" shows up fine, however the image does not display. I'm really not sure why this is happening and nothing I try seems to work. If anyone has any ideas of how to fix this it would be greatly appreciated.

After restarting Xcode, cleaning the build and a number of the other suggestions on SO about this problem. What actually fixed it for me was a hard reboot of the device. (I wasted over an hour on this)

I suppose it just goes to show that the old saying have you turned it off and on again is still true for the latest gadgets!

I was messing around with this for hours too. But i found the solution now. You need to add the image to your project and also to the assets.xcassets via drag and drop.

Had the same issue, adding the image to the "Build Phases -> Copy Bundle Resources" fixed it for me.

If not working, delete derived data. Xcode Preference->Locationtab->Derived data. Then do follow above steps.

It happened to me and makes me crazy, beyond get me lose some minutes 'til I figure it out.

On the design screen, it will not appear, but when you run your app, it will be shown.

I hope it can help!

At last, restart the phone works for me!!

I have spent hours on this issue. Had tried change the images name, delete the whole image assets, modify info.plist, restart Xcode and even tried to set all the attributes of the images(which you can tell how desperate I was).

After invested a lot of time, I got the solution:-

I faced the same problem. 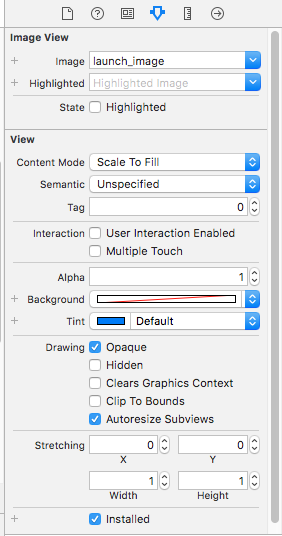 This issue is related to the Assets.xcassets to fix it you must add the image as resource but not in the xcassets folder and then should work just fine

In my case, resetting content and settings for simulator fixed the problem.

After trying everything on several StackOverflow threads, here's what worked for me:

(Might have to clean product or derived data to update, but I didn't have to)

It seems there is some problem with resource caching in xCode. Had the same problem, restarted xCode and everything works fine after that.

Was changing the background image of the splash screen and the new image wasn't showing (react native project).

Following the answers from others.

I did all the below and it was fixed:

Well As of now there is retina device available and I ignored @1x image in Assets.xcassets.

In my case, I have app logo in Splash screen which is not visible when I run the application.

After wasting so much time I figured out that I only provided @2x and @3x images for that logo image.

This issue is resolved by adding @1x version of that image.

In my particular case, the splash screen worked for the simulator and other devices, but stopped working for one specific device. This lead me to believe that it was some caching data kept by xcode (v10 and iPhone 7 v12.1).

I deleted the derived data at: ~/Library/Developer/Xcode/DerivedData/ only emptying the folder contents, not deleting the folder. I then rebooted the mac and the iPhone and cleaned and rebuilt the project, and now it is showing up.

I'm not sure if all of this was necessary, but didn't want to waste any more time narrowing it down, so the above sledgehammer approach worked for me. But of course it always depends on your specific situation - mine was device specific; for others it could be the actual image or launch screen layout etc.

Actually, for some heavyweight images, it isn't a good situation to add them into images.xcassets, because the app loads images.xcassets lightweight images before launch. So I put splash screen images at the first root of load and then the issue has gone:

Hint: You can create your ImageSet in the images.xcassets but place them in the root of the project.

You have to make sure that the file name of your image has a format like .png or .jpg at the end otherwise it will not work. Also, before adding your image, you have to make sure that the image file is in your "Assets.xcassets" folder within your project. This can be done with a simple drag and drop. Also, make sure when you've added your image to your storyboard that the image name in the top left also matches the real image file name. I would try looking into Constraints too. Hope this helps. Good luck with your App.

I tried so many things with this (this thread alone seems to have a million ideas and half of them are conflicting). The problem for me was that when I did things like restarting the device and Xcode, it would cause the image to show for a few sessions of the app, and then it would stop (I have no idea why, but WOW it was annoying).

To clarify, what you would do is create a new image set and name it something like "Launch-Defaults", and then add your images to it. Then, within the UIImageView inside of the storyboard, you use the image "Launch-Default" (not including an extension since there is none since this is an image set).

When you do all of that, the image should actually appear correctly inside of your storyboard. Some people say the image will display blank if you don't use the extension (.jpg or .png), but I assume that is because they are not using the name of the image set. Others say you need to use an extension like .png or .jpg, but the key is to create the image set inside of xcassets and then use that image set inside of the storyboard. When done correctly, there should be no funkiness like an image not showing up or the Launch Screen only working some of the time (requiring a reboot).

Just to add my $0.02 to this question; I got this solved by using PNG images instead of JPG/JPEG images.

After converting the images to PNG and crunching them to reduce the size a little, everything worked fine.

Hope it helps you out!

I spent hours on this problem before finally realizing my mistake. When you add an image to a UIImageView, it will use just the name of the image. If your images are in a different folder than your storyboard, they will show up in xcode but not when running the app. You must add the appropriate file path prefix, for example, images/image.png. It will now appear as a blue question mark in xcode, but it will work in the app.

I faced the same issue. Tried different solutions for that but nothing proved to be helpful. I then realised that the image was not visible only when i directly installed the app into device and the app is still connected to the xcode. If i disconnect it and then open the app the image was visible as expected. It might be a xcode bug.

I just made one more copy of the image and renamed the copy then deleted the old image and added the new image (Same, with name changed) i just gave that image and it worked for me.

Also i am not using the Assets.xcassets, using the image in a folder.

My first mistake was, that I created a normal .storyboard, renamed it and defined it as launchscreen in the project settings. I this case I had image problems. It seems that some settings are missing in this case then, so I just created a new file via file->new and picked directly the "Launch Screen" and then it worked.

Also I had in mind that, that layout constraints are not supported in the launchscreen for some reason. Maybe it was like that in the beginning, not sure, but now constraints should work.

Maybe this helps anyone.

In my case, it was a bit more than just rebooting the device. My launch image was stored in other Assets (Other Pods).

Had to move the image to App project's Assets. And then rebooted my device. (Check simulator first, it should work). Then it worked.

Images can be in format png/pdf, single scale or not doesn't matter.

I just figured this out. My launch image was not showing up, I get a white screen when launching on a device (iPhone 6, 7+) or testFlight. Fix: Renamed "Landing_screen.png" to just "Landing_screen" removing .png part. The image icon in Xcode changed to white icon and in the launch screen storyboard the image appears as a question mark now. The Launch image now appears and not the white screen. My Setup: I am using Swift 3.1 with Xcode 8.3.1. In LaunchScreen.storyboard I added a simple image view and stretched the image to fit the view controller. I set auto layout constraints Top/Bottom/Leading/Trailing space to superview to 0 - see image below: 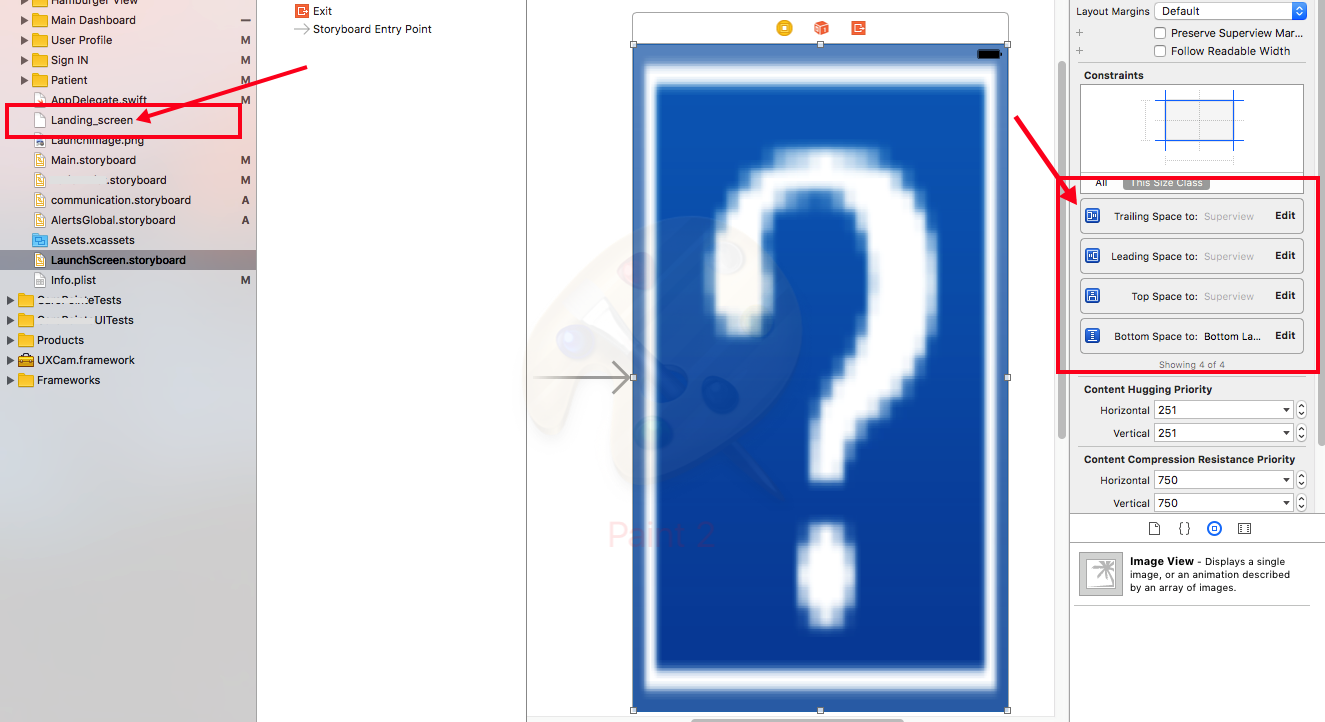 Not the answer you're looking for? Browse other questions tagged ios iphone xcode or ask your own question.

37
Launch Image not showing up in iOS application (using Images.xcassets)
55
Dark mode launch screen in iOS 13
0
launchscreen image can not show
0
How to convert manual view controller to storyboard as a launch screen