Whatever Happened to VRML?

Back in the late 1990s, when I was at grad school VRML was going to take over the world. My peers and I built all manner of useful and interesting things with it by hooking it up to Java and Javascript code.

Of course back then computers were many times slower than they are now - multicore CPUs were largely the stuff of science fiction or hush-hush research projects and our VRML applications ran just that little bit too slowly to catch on in the real world.

A decade on, even a cheap PC with a bog-standard GPU would happily run any of our VRML models with ease and possibly might require throttling to ensure they weren't so fast as to be unusable. But the VRML community has died a bit of a death, web-3d hasn't caught on and I can't even find a browser plug-in. X3d was mentioned a while back but that too hasn't caught on.

Does anybody have any ideas what happened? Is there some other 3D web technology I'm not aware of?

For passing historical interest: 1998 Article on the demise of VRML (The Wall St Journal)

I agree with much of what was posted above. However another problem was that within a very short time most of the tool and viewer developers got bought out by one another, with the eventual result that many tools went away and the leading viewer by far, Cosmo, came under the ownership of Computer Associates, which dropped all support (and even availability for download).

Cortona is still available as a VRML viewer, as are some others.

Adding a bit more to my reply as of 1/13/2014: X3DOM is an initiative to link HTML5 and declarative 3D content using a subset of X3D (the XML-based syntax successor to VRML). It's now usable in many browsers without a plug-in. So, in the words of Monty Python, it's "not dead yet." Also, you'll still see it as a common, standardized import and/or export format, e.g., in Blender. Even Matlab has some support for their simulation environments and to export 3D figures (although when I tried the figure export, the results were pretty bad).

All vrML functionality can now be represented by glTF from Khronos.

I needed a new t-shirt anyway. 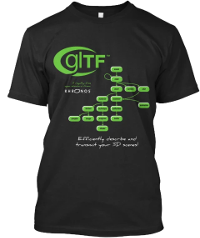 I think the idea was that people would enjoy using 3d interface to navigate information.

This proved incorrect. People use 3D interfaces pretty much exclusively for gaming (or for specialized purposes, such as architecture, engineering or medicine).

During the 90s there was a mini-explosion of technology based around this idea. I remember that Apple designed a 3D browsing system (the name escapes me) that never went off the ground.

In the end, it's far easier for humans to scan 2D representations for information and navigate that way.

There have been various inroads with these technologies with each one pretty much failing. In the past, this is probably due to the internet being used as a resource for fast information and peoples frustration in waiting for such information. These technologies have bubbled away under the surface, many of which have been game related and usually delivered as plugins such as virtools, shockwave, unity, etc, but many of which have had one major failing, their reliance/lack of hardware acceleration. This is especially an issue since the stablility and speed of the browsing is of paramount concern for most users so the problemas arise when needing to include all sort of hardware configuration files with a given plugin (The size starts to become huge), and of course 3d data is usually larger than it's 2d equivalent.

There are still ongoing attempts to provide 3D systems for interface design etc, webgl on webkit is ongoing development, but for hardware based engines, the issue is, does the user have the hardware? If not, then the developer has more work to port to other systems or quite frankly, the content is not accessible.

I started VRML at the beginning with 256 colors and w95. An author program called Chaco Pueblo and Black Sun ( to become Blaxxun) as a veiwer. In my opinion is still the most versatile veiwer. We used Powow for Chatting (similar to IRC), which gave us the idea to integrate as many protocols as possible. Cellphones were popular in Europe before here.

The whole element in those days was multiple protocols in one program, and when Vrml 97 came along, Microsoft stole the show for Gaming and use for Education and Business immediately evaporated.

the advantage of 3D vs 2D, is there is a 3D form of Objective Reasoning that many people in society no longer have while confined and raised to 2D Subjective Space

I think it is idiotic looking at someone on a Video Monitor talking. But alot different in VRML because you can meet in a Historic Location for example anywhere in the world or time and relive events.

I believe there is somewhat of a misunderstanding here, because no one has really used or investigated the full capacity of VRML before it was extinguished.

For example: in the early days the Spanish migrated as far north as SF Bay. The Russians migrated as far south as Fort Ross, which is approximately 40 miles north. They were 40 miles apart from each other for many years. Can you imagine how different the world would be today if they had ever met ?

IMHO - with todays more capability in Graphics and Bandwidth, that more sophisticated "Whirrleds" are possible that would hold peoples attention.

Humanity really dropped the Ball on evolving at Y2K with the misuse of the Internet and turning everything into Gaming.

A-Frame is an open-source Web3D/WebVR framework in the same veins. It is a Javascript library rather than trying to be a standard. Like X3DOM, it allows you to author 3D scenes with HTML, although its entity-component-system pattern makes it much more extensible. While it has a focus on VR, it also functions as a general-purpose (three.js) 3D framework.

I would like to answer this question as an engineer to make new Web3D library.

I don't think WebGL library currently used is not so similar to VRML. Nowadays, 3DCG on the web is much easier and much faster compare to the days when VRML was born. But, I guess they forget to redefine "Web" by themselves.

In my opinion, VRML wanted to change "What is Web?". They would see the web technologies as the tool to make application not just show information. Nowadays, Web engineering technologies are well grown. They enable us to use a lot of methods to achieve rich interfaces. All the technologies containing architecture, network or environment for coding enable us to make our application more interactive.

However, the era when VRML was born was just after Mozaic was appeared. In that era, only text,images or styles are used as media in HTML. But, now we can use video,music and WebGL also.

I guess VRML noticed first that "3DCG" is also assets in the web. But they noticed that too early. They would not think there is such a lot of mobile devices. And these devices have not enough power to use 3DCG in the web.

As some answers says, three.js , A-FRAMES or something other Web3D libraries are kind of solution for 3D in the Web. But, I don't think this is what VRML wanted to do. Cuz, these libraries are not intended to use 3D as "Assets" but something "Programmables".

I think it has a bit to do with the demise of SGI. Yes I know SGI is still going, but it's a shadow of it's former self.

Once SGI dropped IRIX, and switched over to being just another Windows Server Vendor, it was all over for VRML and all it's associated technologies.

I remember years ago SGI started publishing a cute little VRML animated cartoon called Floops. You could watch this little character doing his thing, while manipulating the VRML world in 3D. It was very cool, and very revolutionary for the time.

It's a shame VRML failed. It seemed to have so much potential, and there really is no viable alternative now.

2
Is there a High-Level VRML-like API for doing 3D with HTML5?

4
How to display a VRML model with .NET?
2
VRML Indexed FaceSet
1
How to export VRML including texture from 3D Studio Max
2
VRML in Web browser
1
VRML run a script
2
VRML to JSON converter for WebGL
0
How to stop TimeSensor in VRML
0
VRML Wall with a window
0
VRML IndexedLineSet thickness