For example I have class A which implements class B

How can I call do() from A? (super.do()) So, how I can define some common variable for both classes? Now I can inherit only functions, sub and properties...

added: It is not possible to share variable across hierarhy of classes. You should implements property (same way as functions).

The usual way to do this in VBA is to have A contain an instance of B as well as having A implement B's interface, and then delegate calls to the B interface of A to the internal B.

This is old stuff, but see the Visual Studio 6.0 Programmer's Guide:

There is a chapter on "The Many (Inter)Faces of Code Reuse" that describes this convention:

The way MS describes it is:

In addition to implementing abstract interfaces, you can reuse your code by implementing the interface of an ordinary class, and then selectively delegating to a hidden instance of the class.

This means that implementation inheritance requires lots of explicit delegation methods. There's even a chapter subheading: "Doesn't This Get Tedious?". Yet another reason why OOP in VBA is a PITA (TM)...

To answer the question you posed in your comment, well, an A is a B. When you make A implement B's interface, you are essentially saying that you can treat an instance of A as if it is actually of type B. In VBA, the way you do that is by declaring a variable of type B, and then setting it to an instance of A. VBA will know what to do when you call it like a B:

As far as what you see in the debug window, I don't why it appears that way. And as far as forced delegation, I'm not sure what you mean. VBA automatically dispatches calls to the B interface to the right methods in the A class. If you mean automatically generating the code to inherit B's implementation in the manner described above, there's nothing like that I know of for VBA. I think the various "professional" versions of VB6 could do that, but I've never used VB6 so I don't know.

This is the way I have used it a long time to simulate an abstract class through the interface.

Now let's define the other classes, beginning with the abstract class 'B'.

Let's create class 'A' which implements the abstract class 'B'

And the output, in the verification window, will be: 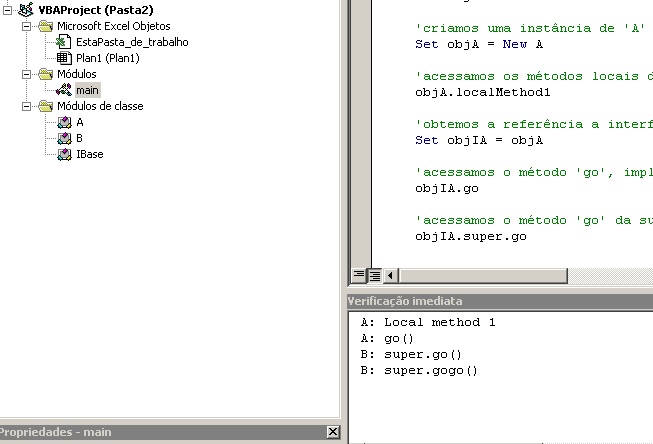 One can pull a trick to mimic inheritance. It works by using the default member property.

This blog post gives the full details but author (disclosure, me) there uses 'Base' instead of 'Super'

Hopefully that syntax is tight enough for you.

I also point out that this does not expose all the base class's internal guts like C# does. This means my method does not suffer from the fragile base class problem. I.e. my method retains encapsulation making it better IMHO.

Not the answer you're looking for? Browse other questions tagged vba excel inheritance or ask your own question.

49
Is VBA an OOP language, and does it support polymorphism?
24
How to use comparison methods between class object modules in VBA in a similar manner as VB.NET?
5
VBA Referring to a container object--syntax and object-oriented methodology
6
Is there a way to write an equality test for a VBA class with private members without exposing knowledge of the existence of those private members?
1
VBA for Office Class Module (Object) Factory
2
Force to support inheritance

1771
Prefer composition over inheritance?
647
What does 'super' do in Python? - difference between super().__init__() and explicit superclass __init__()
1111
Difference between private, public, and protected inheritance
525
Is there a way to crack the password on an Excel VBA Project?
279
How can you represent inheritance in a database?
577
How to avoid using Select in Excel VBA
92
Scala case class inheritance
1047
What are the nuances of scope prototypal / prototypical inheritance in AngularJS?
1548
Why not inherit from List<T>?