Include all Files in Bin folder in Wix installer

I'm new in Wix, I succefully create an MSI installer for my project, but my Bin folder have a lot of DLL's files with EXE main file, I want to include all these files with the installer

I found THIS solution, that seems right but unfortunately I can not accomplish this solution in my Wix file, Here's my Wix file:


I get this Error:

This solution works with WIX 3.11.

To harvest an entire directory, you can use Heat from the WIX toolset. With Heat we can automatically include all files from a given source directory on every build. To do that we first need to edit the Setup.wixproj:

Define the Harvestpath for Heat:

Heat will create a .wxs file. So we need to add this file to the compile ItemGroup:

Then execute Heat in the BeforeBuild build target:

This will generate the HeatGeneratedFileList.wxs every time the WIX installer is built. The directory ..\Deploy has to be set to the directory of the files to include. The only thing we have to do to include these files in our installer is to edit the main .wxs file (like Product.wxs in this example). Heat will create a ComponentGroup with the given name from above. This component needs to be referenced in the Feature section of the Product.wxs:

I think you've gotten into a bit of a muddle, if you don't mind me saying so.

As Brian suggested you can use Heat to scan a folder and generate some code for you. You can use that in one of two ways:

As a development aid

Run the tool with this kind of command:

Then, take directory.wxs and use it as source code.

In the build pipeline

You can use the Heat tool in the build pipeline, so that compiling the install will generate the code.

Contrary to Brian's suggestion, if you are using MSBuild I would suggest the HarvestDirectory target. Here's what I have where I am doing something similar:

This will feed an item into the HarvestDirectory target and make sure it's all handled in the correct way. This code just goes into an ItemGroup in your .wixproj. (If you're not sure how to tweak your project file, check out this video)

Of course, this assumes you are using MSBuild (or Visual Studio, because that uses MSBuild).

Having said all this, if the main issue is simply that there are lots of files, I would simply say knuckle down and just define the list. Use the Heat tool as a scaffold if you like, but there's no substitute for just learning the language and working with it. Trying to do things with auto generated code can introduce subtle issues, and it's always simpler to work with a static list.

I do something similar to what you require here during my installation. I need to copy the contents of a folder with 1000+ files in it (the help files).

What I did to solve this is the following:

In the Installer.wixproj I defined the following:

And this will run heat on the $(Configuration)\bin\ dir and generate a wxs file including ALL the files in the bin dir.

This way if you add or delete any binaries in your bin dir it will automatically get picked up when you rebuild your installer (if the Bin.wxs file doesn't exist).

Now you need to make sure you define the variable "BinDir" for wix which points to the bin dir on the build machine. You also need to add the Bin.wxs file to your wixproj as a link (when adding existing file there's a tiny arrow drop down on "Add". Click that and select "Add as link".)

I think there's an actual heat target somewhere in wix but I haven't looked through that enough to know how to use it yet.

As an alternative to the other answers: 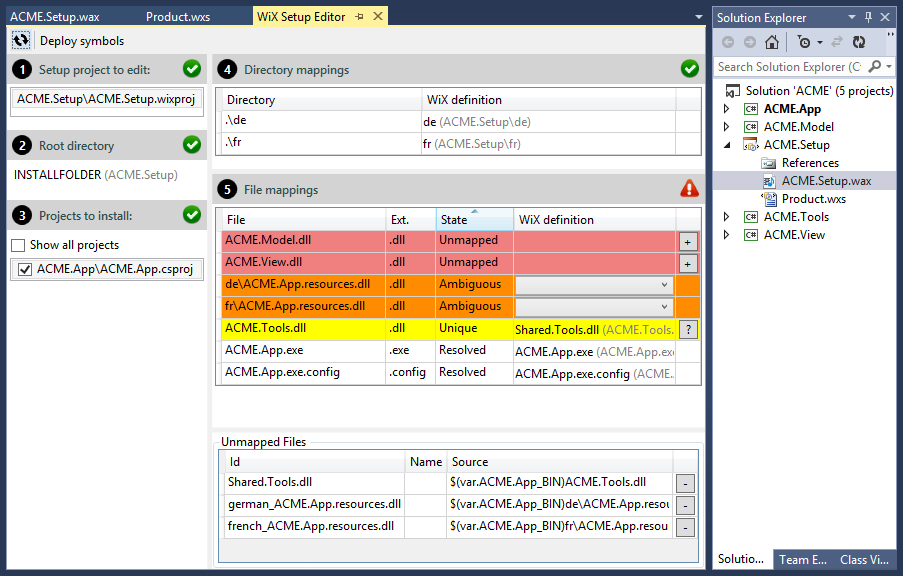 It provides an alternative way to handle all the required files with GUI.

It may be not as sophisticated as command-line tools like heat, but it is much simpler and can be a nice and friendly tool in the beginning, when you just start learning WiX - and want a quickstart.

11
WiX Heat: Pre-build event fires too early on build server
13
How do copy a folder in wix
4
Adventures in Installing a C#/WPF Application (WiX)
-1
Cannot run Winforms application with C++ library on Windows 7 and 8.1
0
Install every file from source directory WiX

245
How to implement WiX installer upgrade?
38
Replicating Visual Studio COM registration with a WiX Installer
143
How can I set the WiX installer version to the current build version?
24
WiX 3 driving me crazy - trying to create desktop shortcut
5
Add a folder to installer in wix not files?
49
Why does my WiX installer need an empty CreateFolder to conditionally update an Xml file?
0
CopyFile not working
2
WIX 3.8 installer: Add files to a pre-existing folder
1
WiX: Fragment not getting included when I replace repititous <ComponentRef> with Feature attribute