Is there still a difference between a library and an API?

Whenever I ask people about the difference between an API and a library, I get different opinions. Some give this kind of definition, saying that an API is a spec and a library is an implementation...

Some will tell you this type of definition, that an API is a bunch of mapped out functions, and a Library is just the distribution in compiled form.

All this makes me wonder, in a world of web code, frameworks and open-source, is there really a practical difference anymore? Could a library like jQuery or cURL crossover into the definition of an API?

Also, do frameworks cross over into this category at all? Is there part of Rails or Zend that could be more "API-like," or "libraryesque"?

My view is that when I speak of an API, it means only the parts that are exposed to the programmer. If I speak of a 'library' then I also mean everything that is working "under the hood", though part of the library nevertheless.

A library contains re-usable chunks of code (a software program).

These re-usable codes of library is linked to your program through APIs (Application Programming Interfaces). That is, this API is an interface to library through which re-usable codes are linked to your application program.
In simple term it can be said that an API is an interface between two software programs which facilitates the interaction between them. 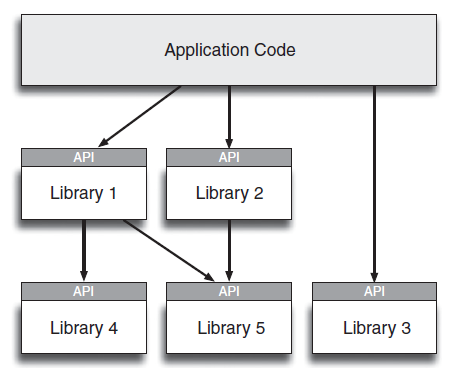 For example, in procedural languages like C, the library math.c contains the implementations of mathematical function, such as sqrt, exp, log etc. It contains the definition of all these functions.

These function can be referenced by using the API math.h which describes and prescribes the expected behavior.

That being said, an API is a specification (math.h explains about all the functions it provides, their arguments and data they return etc.) and a library is an implementation (math.c contains all the definitions of these functions).

API is part of library that defines how it will interact with external code. Every library has API, API is sum of all public/exported stuff. Nowadays meaning of API is widened. we might call the way web site/service interact with code as API also. You can also tell that some device has API - the set of commands you can call.

Sometimes this terms can be mixed together. For example you have some server app (like TFS for example). It has API with it, and this API is implemented as a library. But this library is just a middle layer between you and not the one who executes your calls. But if library itself contains all action code then we can't say that this library is API.

I think that Library is a set of all classes and functions that can be used from our code to do our task easily. But the library can contain some of its private functions for its usage which it does not want to expose.

API is a part of library which is exposed to the user. So whatever documentation we have regarding a library, we call it an API Documentation because it contains only those classes and functions to which we have access.

we have first to define an interface ...

Interface :is the means by which 2 "things" talk to each other and exchange information. "things" could be a (1) human or (2) a running code of any sort (e.g. library ,desktop application , OS , web service ... etc).

if a human want to talks to a program he need Graphical user interface (GUI) or command line interface (CLI). both are types of interfaces that humans (but not programs) would like to use.

so to answer the original poster question : library is a type of running code and the API is the means by which this running code talk to other running codes.

In Clear and concise language

Library: Collection of all classes and methods stored for re-usability

API: Part of library classes and methods which can be used by a user in his/her code.

There are two cases when we speak or think of API

I think, that in the first case, thinking in terms of API is confusing. It's because we always use a library. There are only libraries. API without library doesn't exist, while there's a tendency to think in such terms.

How about The Standard Template Library (STL) in C++? It's a software library.

You can have different libraries with the same API, meaning set of available classes, objects, methods, functions, procedures or whatever terms you like in some programming language. But it can be said, that we have different implementation of some "standard" library.

Some analogy may be that: SQL is a standard but can have different implementations. What you use is always some SQL engine which implements SQL. You may follow only standard set of features or use some extended, specific to that implementation.

And what "under the hood" in library is not your concern, except in terms of differences in efficiency by different implementations of such library.

Of course I'm aware, that this way of thinking is not what is a "generally binding standard". Just a lot of new terms have been created, that are not always clear, precise, intuitive, that brings some confusion. When Oracle speaks about Collections. It's not library, it's not API, it's a "Collections Framework".

Not the answer you're looking for? Browse other questions tagged api frameworks paradigms or ask your own question.

3
Is OpenGL an API or software library?