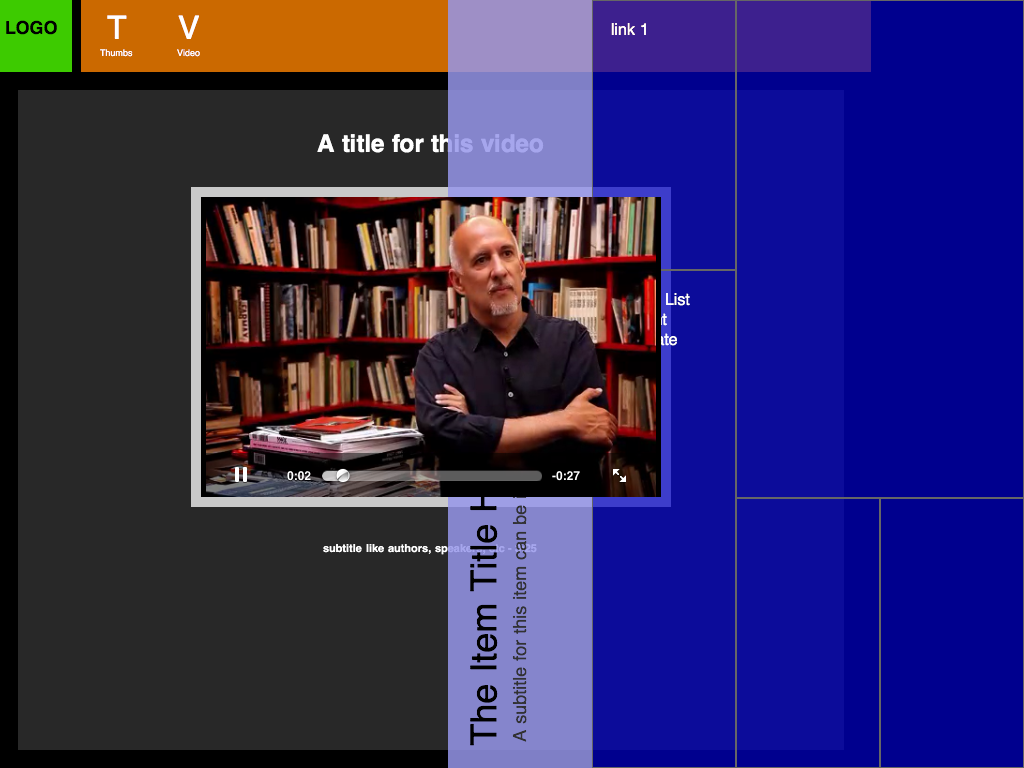 The issue only occurs if the video element was dynamically created. If the element was just in the page as it loaded, z-index works fine.

You can fix z-index on dynamically created videos by giving the video element -webkit-transform-style: preserve-3d.

Yep, it's as bad as haslayout on IE!

Based on my experience and understanding of how iOS currently works, this isn't possible.

Mobile Safari on the iPad cuts a hole for a Quicktime window , which plays back the video using the built in hardware acceleration to improve battery life. (The iPhone and iPod Touch just open it up in a separate window to achieve the same effect.)

This window doesn't play nicely with the other HTML on the page. In fact, I haven't found a way to get mobile Safari to display anything on top of a tag. My guess is that this is because the hardware acceleration only allows for video scaling and positioning, and that it's only able to handle one video at a time.

I'm using flowplayer and a simple CSS dropdown menu and had the same problem.

I have drop down menu that, when tapped, covers part of the video area. The submenu shows up over the video as expected, but no touch events were being sent.

I fixed it by combining a couple of suggestions from others answering this question: I set visibility:hidden when opening the menu and visibility:visible when closing the submenu, AND set the -webkit-transform-style:preserve-3d CSS property on the video.

Here's the pertinent code. I left out the CSS for the menubar, but it does what you might expect - resulting in a menu that covers portions of the video.

I have managed to place a menu div over a html5 video tag in mobile-safari on the ipad. To be honest I didn't have any problems and it just worked. It could be though because I was using CSS3 animations and therefore the GPU? You could try using a hack to add an element to the GPU. If you put -webkit-transform: translateZ(0); on the element it should force it to use the GPU...

This is the only thing it worked to me. No z-index, no transform-style:preserve-3d.

I ran into this also. The only thing that I could get to work for me was to add

to the video tag when showing a div over it that needed to be clicked on.

Using Flowplayer with the ipad plugin and the controlbar plugin allowed me to remove the ipad created control bar and replace it with something that can be z-indexed below my modal windows.

You can fix z-index on dynamically created videos by giving the video element -webkit-transform-style: preserve-3d.

This worked for me with a dynamically created video element. I also set the z-index of the over-laying div to z-index: 888; which may also have helped.

I had this problem which was occurring on mobile devices with an off canvas menu. When the menu was over the video you could not tap any of the menu items.

I found using display none did not work as when you set it to block again the video would not work.

I also tried setting the height to 0 - this did not work as the video still seemed to take up the space even though you couldn't see it.

The final method seems a bit extreme but it is not really noticeable when it is being used.

This is the code that will work on both the iPad and iPhone. I tried removing the controls and then add them again, but this worked only on iPad not on iPhone. After remove the opacity and then add it again it worked on iPhone also.

Just ran into this issue today & had to cobble together a solution from multiple answers since none fully handled the problem ...

I have video elements in a collapsed "table view" style list that were capturing touch events on iPhone when trying to tap on other list items. On iPhone the videos would play when tapping other collapsed elements that happened to be occupying the same spot on screen.

Fixing this required all of the following:

... didn't seem to have any effect, but I left it in anyway. Everything's working now so I don't want to screw with it further :)

3) In addition to "visibility" the HTML5 video tag controls attribute also has to be added/removed dynamically. Either:

5) Although the main concern was the screwy iPhone behavior, I also had to account for responsive window size changes above my smallest media query breakpoint of 600px - otherwise the videos would appear/disappear at the wrong screen sizes.

Quite a pain to work around what's essentially a stupid mobile Safari bug... I sure hope it works on iPad when I test it later...

For anyone running into issues with this still, another fix that ended up working for me was to change the options in the embed code to not allow controls, suggested videos, and video title and player options. I added a simple Modernizr.MQ query to change the src for tablet and mobile, and included the following to the iframe src for mobile:

I never completely tracked down why this works, but my guess is that the controls have some user-agent style that gives them a high z-index and makes the element sit on top of everything.

Not the answer you're looking for? Browse other questions tagged ipad mobile-safari html5-video or ask your own question.