I have installed Ubuntu Server 16.04 on a Virtual machine as a guest OS on my mac.

as always I have set it up with NAT and "Host Only" with the following configuration the way I had all my other VM Boxes with Ubuntu 14.04 to have static IP and Internet. but they seem not to work with the new Ubuntu. although "ifconfig" is giving me an OK result, I don't have Internet and I cannot reach my guest machine from my host machine with the mentioned IP.

and the result of "ifconfig -a" looks something like this: 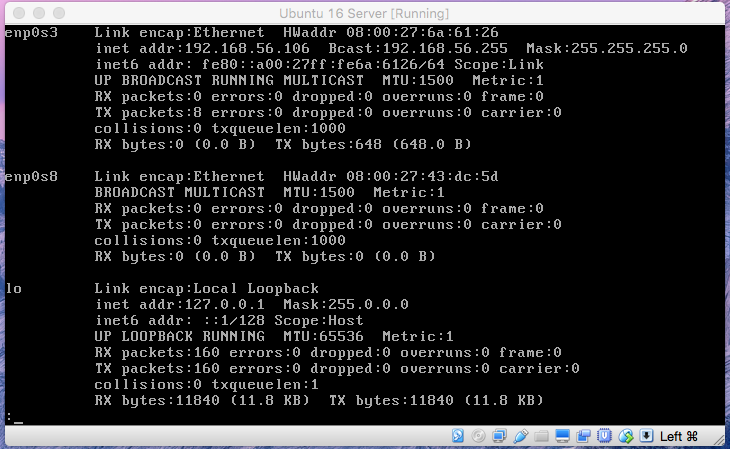 Please note: I have restarted my network service(/etc/init.d/networking) and machine completely some hundred times.

I guess the problem was the new naming in Ubuntu 16.04. so I set my first Adapter to "Host-only Adapter" and second one to "NAT" and i could successfully get my IP set to "192.168.56.106" with following configuration. here is my /etc/network/interfaces :

I had the same problem. I solved it by adding the following at the end of /etc/network/interfaces.

Please note that I configured the first network adapter as "host-only" and the second one as NAT.

I can confirm this: the order of the network adapters in the VirtualBox settings makes the difference. First one should be host-only, second one NAT.

Not the answer you're looking for? Browse other questions tagged ubuntu networking virtualbox ubuntu-16.04 or ask your own question.

1
How to change a DHCP interfaces to STATIC interfaces in OVH VPS on Ubuntu 16.04
0
Cannot Ping between Host and Guest VM on VirtualBox