How can I make a tetradecagon with Processing.Js? 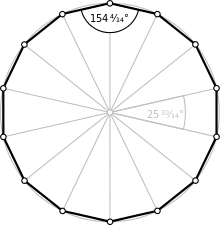 Now, in Processing.JS, I was wanting to use a while loop:

(edit) I added translate(200,200); just above the while() loop - this helped, but the lines are still not looking like the picture above.

The second point of the line is not staying in the center; the whole line is being shifted. I only want the first (top) point to be shifted by the given change in angles.

How do I change the code in order to achieve the goal that I am striving for?
Any help would be appreciated - Thanks for your time!

P.S. This is my result with the current code - 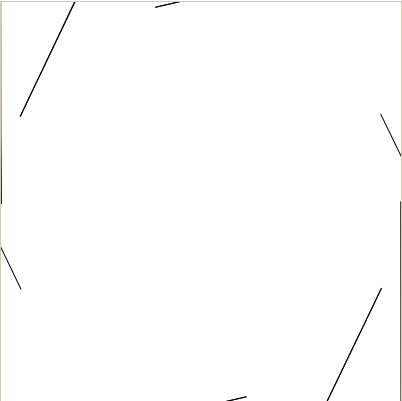 With that said, if you want to do this based on coordinate rotation, look at your 14-gon: it's 14 repeated triangles, so analyze one triangle and draw that 14 times. Any triangular slice is defined by a line from "the center" to "a vertex on the 14-gon" at a (necessary) distance r, the radius of the circumscribing circle. So, given a vertex (r,0) on the 14-gon where is the next vertex (nx,ny)?

(I'm using tau here because it's a far more convenient constant for programming purposes. It's simply equal to 2*pi, and as such represents an entire circle, rather than a half circle)

Alright, done. And this nx,ny computation is clearly not specific to the number 14, it about arbitrary angles, so let's code the solution and make it work for any n-sided polygon:

And now we can freely change both the polygon radius and the number of sides by changing the input to drawNgon(..., ...).

Not the answer you're looking for? Browse other questions tagged javascript processing or ask your own question.