I am trying to install it on an Android operating system (I have a Samsung Galaxy tablet). I would like to install both R and RStudio.

I've been online to try and find out about this but most of the articles are quite old (going back to 2013) and don't make much sense to me.

I have both R and R studio installed on my personal laptop (with a windows OS) and found these both very straightforward to set up, but having some trouble figuring out how to do this on a tablet.

If anyone has done it recently and been successful please let me know.

I found two workarounds in a non-rooted device. Working on browser or VNC Viewer.

Note: In termux app (google play) is possible to install R, see Conor link; the important setupclang-gfort-8 step can be accomplished after installing make and gcc-8 and using the new package names in the output of the (outdated) Conor protocol. The problem appears if you want GUI. An option is the Rcmdr package, but as termux has not tcl-tk, as you can see inside R using capabilities(), I ended installing ubuntu in termux

Notes:I also installed X11 in ubuntu, but didn't seem to improve the GUI experience of Rcmdr. In a yoga book with android the @Ajay answer didn't work.

Enter the commands below one at a time:

Install the following packages. It might be wise to install each individually to monitor the warnings, I think some of these packages may be deprecated at this point in time.

Step 6: Further customize with Nvim-R or whatever else you like 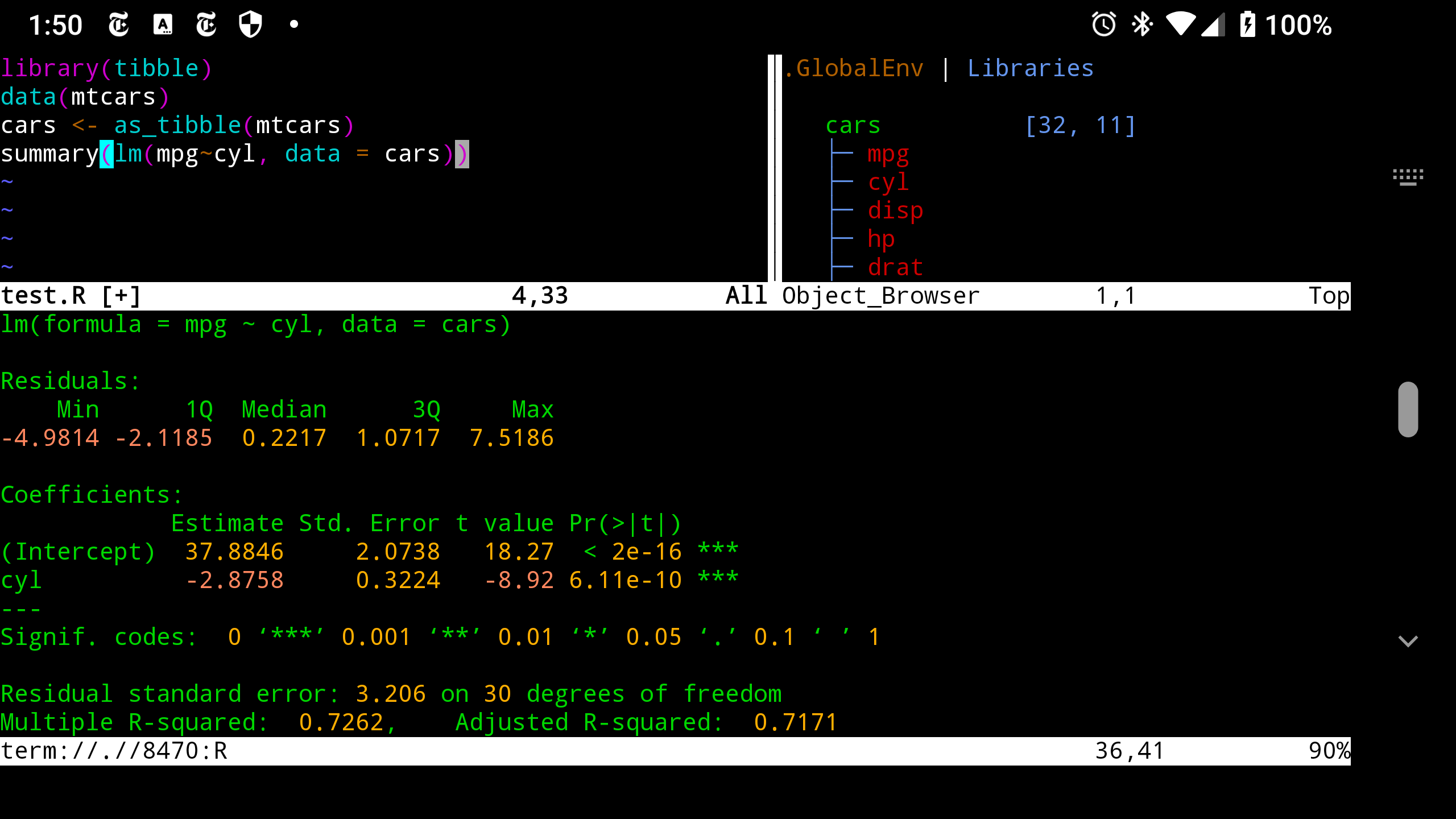 Here is a summary of my experiments, as of October 2021. Long story short: I have a fully working R (complete with tidyverse) on my tablet, and I can access it from jupyter (which is not my first choice in general, but is probably appropriate for this platform and my use - I'm not planning to develop on Android, merely to try code snippets etc).

This draws mostly from the present article as well as from How do I install Jupyter notebook on an Android device? , and links therein.

Also, caveat reader: I'm not an expert in Linux, even less so on Android, and my understanding of Python is minimal. Sorry for any mistake or imprecise statement.

Including trial and errors, the whole process took me some 5 hours. Now I know what to do, I'd probably manage in 1 or 2.

Android is a linux in disguise, so in principle it is possible to install all or most linux apps. There are, however, several caveats:

For these reasons, you can not always use ordinary .deb or .rpm packages and need to go through a somewhat convoluted route.

Assuming you do not want to go the root route, you can still manage quite a few things.

You will need some basic familiarity with linux commands (cd, ls, chmod, ln...), and at least a basic idea of how packages are installed and managed in linux (apt-get or pkg), in R (install.packages() ) and in python (pip install). Also, it will not harm if you know what a compiler is (gcc), and if you realize that some R/python packages rely on compiled code (binaries) that typically resides somewhere else on the system.

Termux is "an Android terminal emulator and Linux environment app", a portable Linux distro running on Android (more or less).

Unfortunately the version currently on G-play is not the most recent one, so you want to use the f-droid version. So, install f-droid and then, from f-droid, install termux.

You will need basic tools (compiler etc) up and running on termux. This will require installing packages and in turn, you need packages compiled for this platform. In termux, many packages are maintained by "its-pointless" who also runs the relevant repository. So, in termux :

Now you can install more utilities, from its-pointless repo:

And configure your compiler

At that stage, you should have a working R on your system (although purely text-based, but you can still use an external editor and source() your scripts).

You maybe want a GUI, or more pakages (tidyverse). Shortly, the main problem you will face is that many R packages in linux rely on system libraries, that need to be installed from linux. In principle you should be able to install the full libraries (the binaries as well as the R code) from install.packages(), that launches gcc to compile whatever code is needed; but practically, the compilation seems to fail more often than not. Probably the Android gcc has its quirks...

So the general idea will be to install from termux (or its-pointless) repo the R packages you need, or at least the library they rely on. The same is true for python libs, by the way.

From within R, try to install what you need with the usual install.packages() command. If something needs to be compiled, it will probably fail. Read carefully the error - eventually you will find a line that says something like "missing libpango.so". This tells you, in this case, that you need to install pango, which happens to belong to the pango package : in termux, run pkg install pango, then return to R and try again.

Also, updating your packages to the latest version (pkg upgrade all) will do no harm...

On stack overflow, you will find various references to zlib, libpng, etc... read and interpret the error message.

In one case (R package repr, that needed base64, itself relying on libicu) I had a version issue - one of the termux packages was (incorrectly) requiring an old version of libicuuc (libicuuc.so.68), whereas the same termux had installed libicuuc.so.69 on my system. In this case, the cure was to create a symbolic link in the approriate directory, as follows

.. and the system happily followed the link :-)

By playing around with this, I managed to install tidyverse, as well as IRkernel that is required to establish a connection between R and jupyter. IRkernel needs to be configured from within R: IRkernel::installspec()

One user at Installing R on Android refers to the possibility of installing VNC, to obtain Rcmdr. I haven't tried.

It is also possible to install jupyter or jupyter-labs (which is not my favourite IDE under normal circumstances, but is probably an appropriate platform on a Android device).

Jupyter is python based, so you will need to play the same game with Python and python packages. Python packages are installed using pip (from the linux command line), and you will have the same issue with compiled binaries. Fortunately the most tricky python packages are packaged by its-pointless for termux, so here too, you will end up installing quite a few things outside of pip.

Installing R on Android suggests installing ubuntu on top of termux, and then installing jupyter from within ubuntu. I found it unnecessary (How do I install Jupyter notebook on an Android device?)

There are also references to modejs, liblapack-dev and libopenblas-dev, I cannot remember whether they were required or not in the end (or already installed by something else). Also sometimes the relevant code moved out of the dev package to a stable one (so it would be liblapack)

Then, you need to install python stuff. Web sources suggest

or/and, depending on the version you want to use

and (not required but useful to have in jupyter) :

I'm not sure why we need LDFLAGS...

As previously, some of the "hybrid" packages are best installed from termux, for instance scipy (technically a python package, should be installed with pip install scipy) is easier to install (or must be installed?) using the termux version, so pkg install scipy

Again, some debugging will be required. Read the pip output, try to find out which package failed to install, see what you can do from termux, try again. Sometimes I found that dropping the LMFLAGS helped (or installing packages one by one), for instance a plain pip install cffi and pip install pyzmq worked better than having them installed as dependencies to jupyter. No idea why.

In the end, I launched jupyter (type jupyter notebook, or jupyter lab in termux console, copy the url, open in a browser)... only to have R crash on the first command. Back in termux I could see that it was still missing a library somewhere, which I tracked down and installed from termux (I think it was pango, this time).

So in short: Read the Friendly Error Messages !

55
How do I install Jupyter notebook on an Android device?
17
Are there any Android version of R (without rooting the device)?
4
Is it possible to do Android development using the R programming language?
0
How can I use or convert R language script/program to Android application using Java/Kotlin?
0
How to call a custom R script using Android?

2085
Is there a way to run Python on Android?
2053
How to lazy load images in ListView in Android
1943
How to get screen dimensions as pixels in Android
4238
How to close/hide the Android soft keyboard programmatically?
3108
How to stop EditText from gaining focus when an activity starts in Android?
1977
"Debug certificate expired" error in Eclipse Android plugins
3008
Is there a unique Android device ID?
2199
What is 'Context' on Android?
3935
Proper use cases for Android UserManager.isUserAGoat()?