In Git, is there a way to merge all changes from one branch into another, but squash to a single commit at the same time?

Once that work is finished and I want to merge WIP branch back into master, I'd like to discard all those intermediate commits, and just a have a single clean commit.

Is there an easy way to do this?

Alternatively, how about a command that squashes all commits on a branch since the point where it was branched?

Another option is git merge --squash <feature branch> then finally do a git commit.

Produce the working tree and index state as if a real merge happened (except for the merge information), but do not actually make a commit or move the HEAD, nor record $GIT_DIR/MERGE_HEAD to cause the next git commit command to create a merge commit. This allows you to create a single commit on top of the current branch whose effect is the same as merging another branch (or more in case of an octopus).

Found it! Merge command has a --squash option

at this point everything is merged, possibly conflicted, but not committed. So I can now:

Try git rebase -i master on your feature branch. You can then change all but one 'pick' to 'squash' to combine the commits. See squashing commits with rebase

Finally, you can then do the merge from master branch.

Using git merge --squash <feature branch> as the accepted answer suggests does the trick but it will not show the merged branch as actually merged.

Therefore an even better solution is to:

This wiki explains the procedure in detail.

Both screenshots show the same range of commits in the same repository. Nonetheless, the right one is more compact thanks to --squash.

With the --squash flag it looks like two parallel branches with no relation: 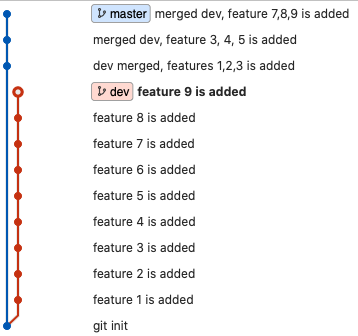 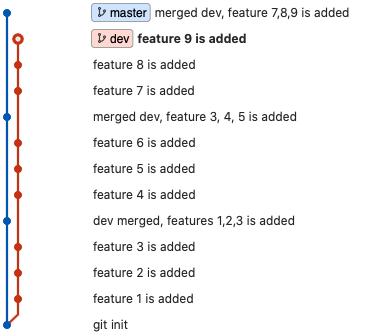 Personally, i don't like --squash option, try this trick, maybe it fits your needs, i use it for small projects:

null commit for intentionally merge conflict, name it anything you prefer 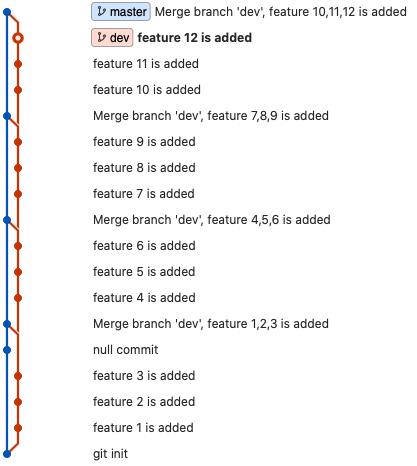 I have created my own git alias to do exactly this. I'm calling it git freebase! It will take your existing messy, unrebasable feature branch and recreate it so that it becomes a new branch with the same name with its commits squashed into one commit and rebased onto the branch you specify (master by default). At the very end, it will allow you to use whatever commit message you like for your newly "freebased" branch.

Install it by placing the following alias in your .gitconfig:

Use it from your feature branch by running: git freebase <new-base>

I've only tested this a few times, so read it first and make sure you want to run it. As a little safety measure it does print the starting sha1 so you should be able to restore your old branch if anything goes wrong.

I'll be maintaining it in my dotfiles repo on github: https://github.com/stevecrozz/dotfiles/blob/master/.gitconfig

git merge --squash <feature branch> is a good option .The "git commit" tells you all feature branch commit message with your choice to keep it .

Risk - deleted files may come back .

You can do this with the "rebase" command. Let's call the branches "main" and "feature":

The rebase command will replay all of the commits on "feature" as one commit with a parent equal to "main".

You might want to run git merge main before git rebase main if "main" has changed since "feature" was created (or since the most recent merge). That way, you still have your full history in case you had a merge conflict.

After the rebase, you can merge your branch to main, which should result in a fast-forward merge:

14
How do I avoid committing small changes in git?
3
How to squash merge multiple commits from branch to master in a single commit using SmartGIT?
4
Why does my git log graph grow one more line after I merge a branch each time?
2
Merge a branch, but dont fill gitk with noise BUT dont lie about where it came from
0
New branches get all previous commits from copied branch
1
How to merge changes from feature branch to main branch
0
Git track two histories at the same time for multiple origins