TensorBoard - Plot training and validation losses on the same graph?

Is there a way to plot both the training losses and validation losses on the same graph?

It's easy to have two separate scalar summaries for each of them individually, but this puts them on separate graphs. If both are displayed in the same graph it's much easier to see the gap between them and whether or not they have begin to diverge due to overfitting.

Is there a built in way to do this? If not, a work around way? Thank you much!

The work-around I have been doing is to use two SummaryWriter with different log dir for training set and cross-validation set respectively. And you will see something like this: 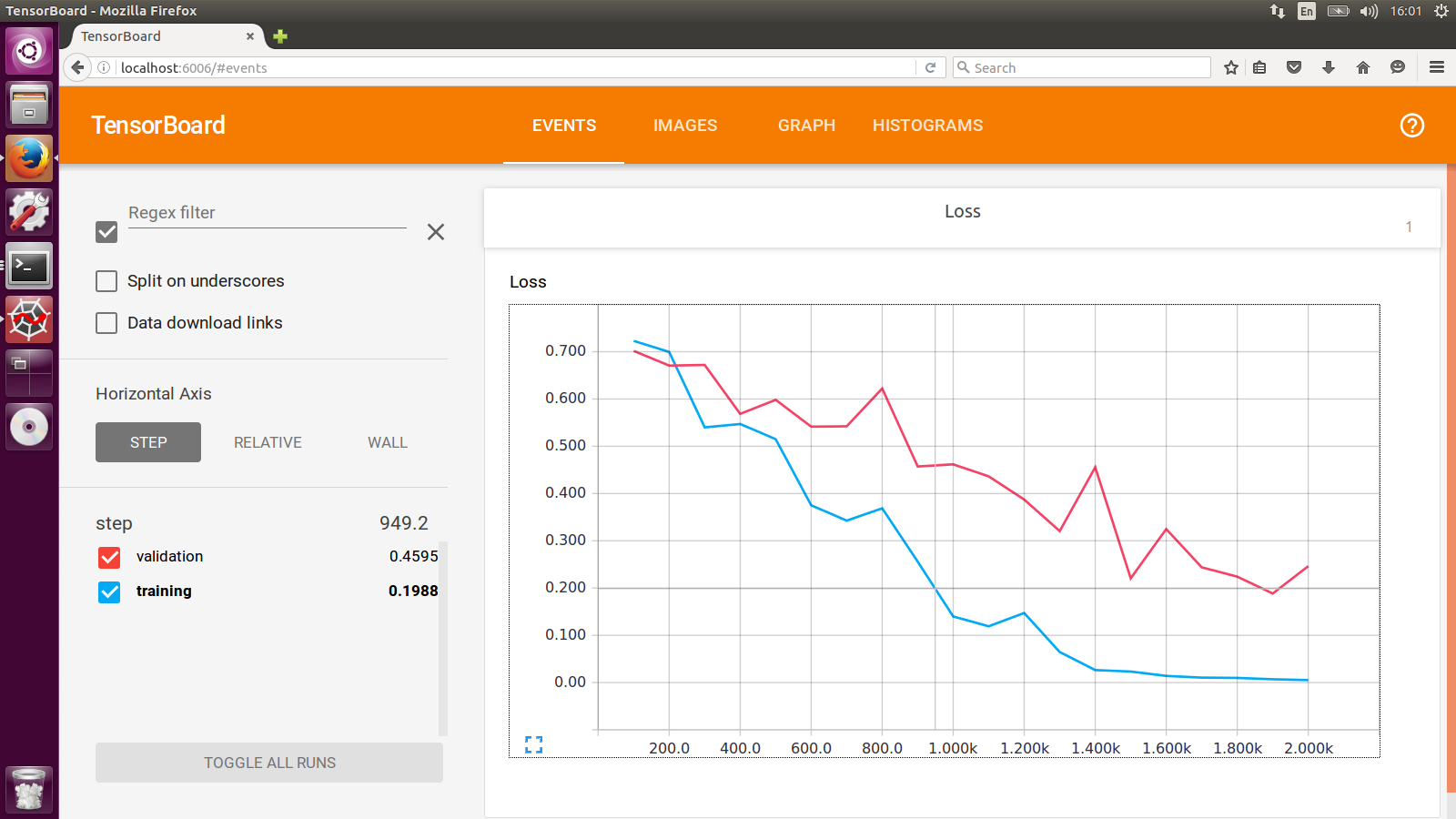 Rather than displaying the two lines separately, you can instead plot the difference between validation and training losses as its own scalar summary to track the divergence.

This doesn't give as much information on a single plot (compared with adding two summaries), but it helps with being able to compare multiple runs (and not adding multiple summaries per run).

Many thanks to niko for the tip on Custom Scalars.

I was confused by the official custom_scalar_demo.py because there's so much going on, and I had to study it for quite a while before I figured out how it worked.

To show exactly what needs to be done to create a custom scalar graph for an existing model, I put together the following complete example:

My "original model" has these scalars: 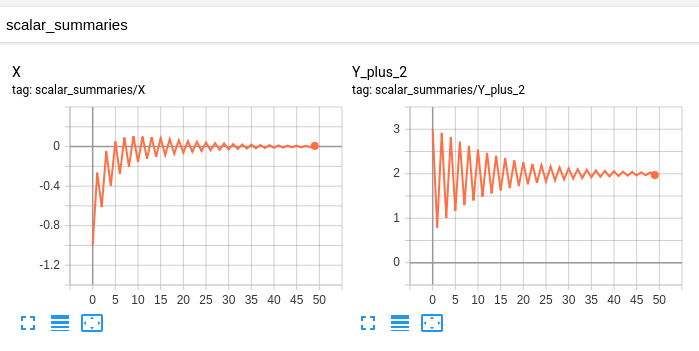 My modified model has the same scalars and graph, together with the following custom scalar: 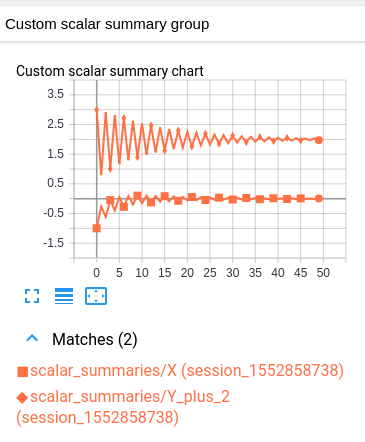 This custom scalar chart is simply a layout which combines the original two scalar charts.

Unfortunately the resulting graph is hard to read because both values have the same color. (They are distinguished only by marker.) This is however consistent with TensorBoard's convention of having one color per log.

The idea is as follows. You have some group of variables which you want to plot inside a single chart. As a prerequisite, TensorBoard should be plotting each variable individually under the "SCALARS" heading. (This is accomplished by creating a scalar summary for each variable, and then writing those summaries to the log. Nothing new here.)

To plot multiple variables in the same chart, we tell TensorBoard which of these summaries to group together. The specified summaries are then combined into a single chart under the "CUSTOM SCALARS" heading. We accomplish this by writing a "Layout" once at the beginning of the log. Once TensorBoard receives the layout, it automatically produces a combined chart under "CUSTOM SCALARS" as the ordinary "SCALARS" are updated.

Assuming that your "original model" is already sending your variables (as scalar summaries) to TensorBoard, the only modification necessary is to inject the layout before your main iteration loop starts. Each custom scalar chart selects which summaries to plot by means of a regular expression. Thus for each group of variables to be plotted together, it can be useful to place the variables' respective summaries into a separate name scope. (That way your regex can simply select all summaries under that name scope.)

Important Note: The op which generates the summary of a variable is distinct from the variable itself. For example, if I have a variable ns1/my_var, I can create a summary ns2/summary_op_for_myvar. The custom scalars chart layout cares only about the summary op, not the name or scope of the original variable.

Here is the result: 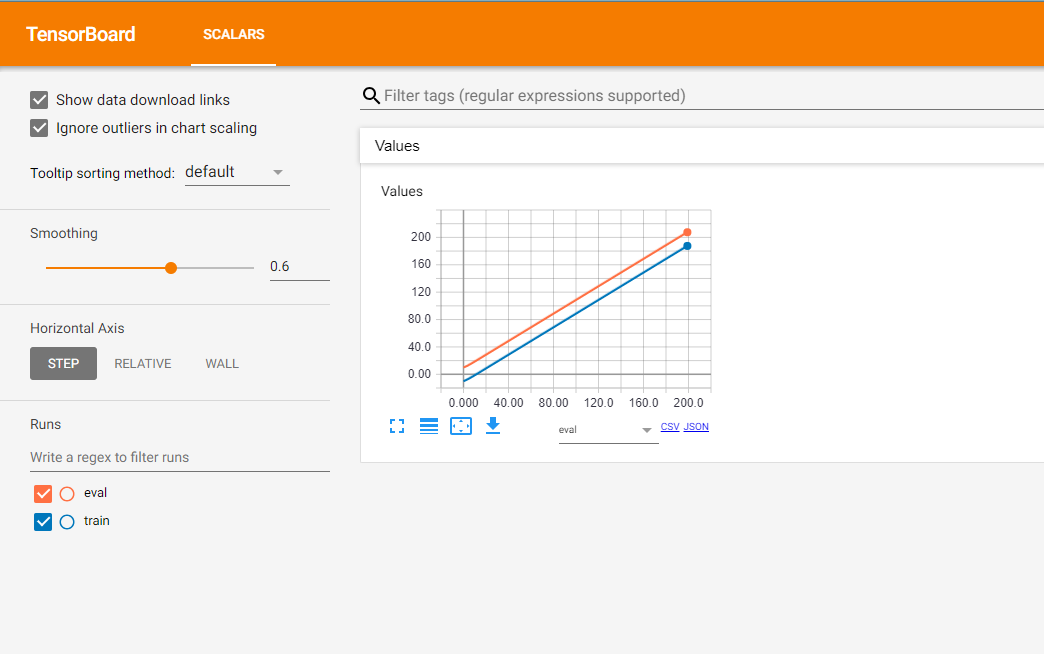 The orange line shows the result of the evaluation stage, and correspondingly, the blue line illustrates the data of the training stage.

Also, there is a very useful post by TF team to which you can refer.

For completeness, since tensorboard 1.5.0 this is now possible.

You can use the custom scalars plugin. For this, you need to first make tensorboard layout configuration and write it to the event file. From the tensorboard example:

A Category is group of Charts. Each Chart corresponds to a single plot which displays several scalars together. The Chart can plot simple scalars (MultilineChartContent) or filled areas (MarginChartContent, e.g. when you want to plot the deviation of some value). The tag member of MultilineChartContent must be a list of regex-es which match the tags of the scalars that you want to group in the Chart. For more details check the proto definitions of the objects in https://github.com/tensorflow/tensorboard/blob/master/tensorboard/plugins/custom_scalar/layout.proto. Note that if you have several FileWriters writing to the same directory, you need to write the layout in only one of the files. Writing it to a separate file also works.

Tensorboard is really nice tool but by its declarative nature can make it difficult to get it to do exactly what you want.

I recommend you checkout Losswise (https://losswise.com) for plotting and keeping track of loss functions as an alternative to Tensorboard. With Losswise you specify exactly what should be graphed together: 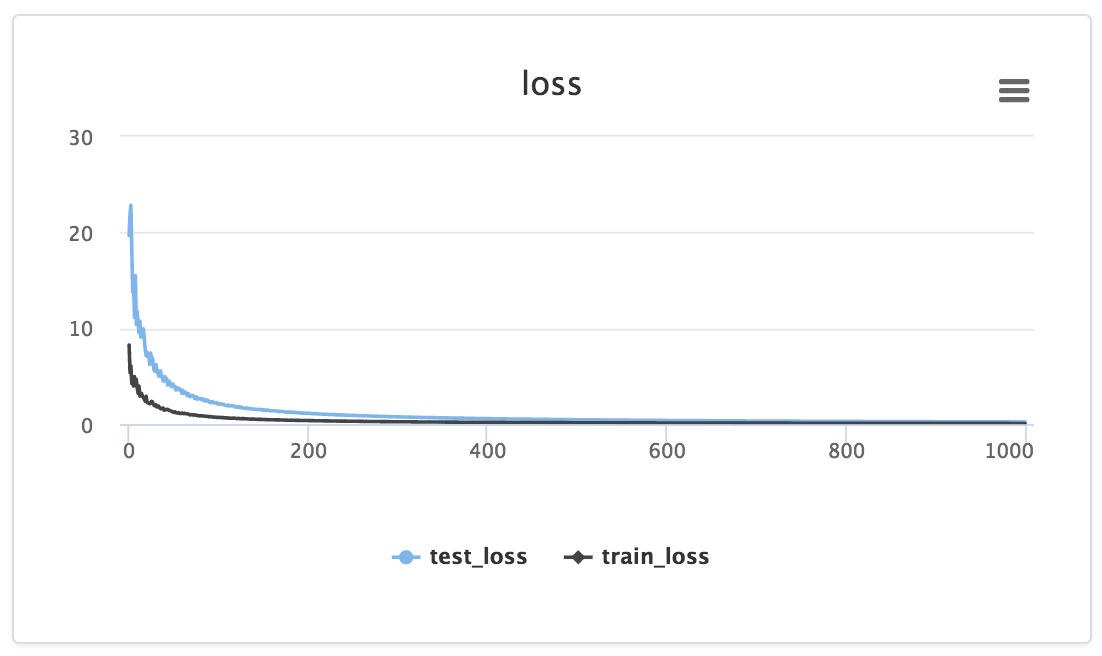 Notice how the data is fed to a particular graph explicitly via the loss_graph.append call, the data for which then appears in your project's dashboard.

In addition, for the above example Losswise would automatically generate a table with columns for min(training_loss) and min(validation_loss) so you can easily compare summary statistics across your experiments. Very useful for comparing results across a large number of experiments.

The solution in PyTorch 1.5 with the approach of two writers:

Keys in the train_losses dict have to match those in the val_losses to be grouped on the same graph.

Please let me contribute with some code sample in the answer given by @Lifu Huang. First download the loger.py from here and then: 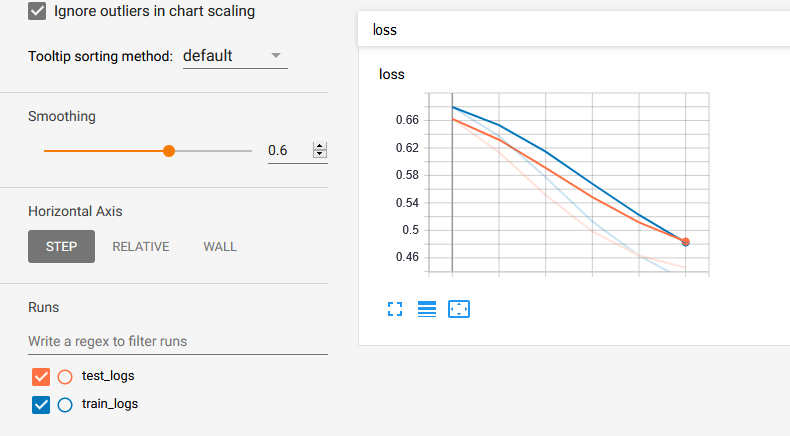 Not the answer you're looking for? Browse other questions tagged machine-learning tensorflow tensorboard or ask your own question.