I want to retrieve a list of all schemas in a given Sql Server database. Using the ADO.NET schema retrieval API, I get a list of all collections but there is no collection for 'Schemas'. I could traverse the 'Tables', 'Procedures' collections (and others if required) and obtain a list of unique schema names but isn't there a easier/shorter way of achieving the same result?

Edit: I can get the list of schemas by querying the system view - INFORMATION_SCHEMA.SCHEMATA but would prefer using the schema API as first choice.

For 2005 and later, these will both give what you're looking for.

For 2000, this will give a list of the databases in the instance.

In SQL Server 2000 (and lower), there aren't really "schemas" as such, although you can use roles as namespaces in a similar way. In that case, this may be the closest equivalent.

This will give you the name and schema_id for all defines schemas in the database you execute this in.

I don't really know what you mean by querying the "schema API" - these sys. catalog views (in the sys schema) are your best bet for any system information about databases and objects in those databases.

You can also query the INFORMATION_SCHEMA.SCHEMATA view:

I believe querying the INFORMATION_SCHEMA views is recommended as they protect you from changes to the underlying sys tables. From the SQL Server 2008 R2 Help:

Ironically, this is immediately preceded by this note:

Some changes have been made to the information schema views that break backward compatibility. These changes are described in the topics for the specific views.

If you are using Sql Server Management Studio, you can obtain a list of all schemas, create your own schema or remove an existing one by browsing to: 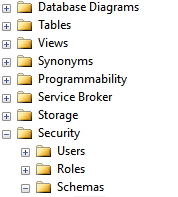 You can also use the following query to get Schemas for a specific Database user:

Not the answer you're looking for? Browse other questions tagged c# .net sql-server ado.net or ask your own question.

-2
how can i see all the scheme in the sql server 2000
988
How do I get list of all tables in a database using TSQL?
211
What is best tool to compare two SQL Server databases (schema and data)?
0
get schemas in a specific databse in ms sql server